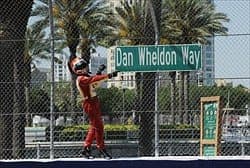 The 2013 season is finally getting underway! What more news do you need? Actually, as is usually the case after the offseason, there are plenty of changes to get used to. First, there are some new rules designed to make strategy more of a player on the road/street courses and to take mileage racing off the table. Race distances for some events, including this weekend at St. Petersburg, have been changed to discourage fuel mileage racing. This week’s event will be ten laps longer. Long Beach has been shortened by five laps while Milwaukee and Mid-Ohio have also been lengthened. In addition, teams will now be able to start the race with any amount of fuel on board they want instead of being required to start on full tanks. Do you go light, go for speed and work extra stops into the strategy or do you go full, run slower, but stay out longer? Teams will still have regular and alternate tires and will still need to run both during road/street course races.

You will also need your updated score card to keep track of all the drivers that have moved around. Tristan Vautier is new to the ranks for Schmidt Peterson, Sebastian Saavedra returns full time with Dragon, AJ Allmendinger will be around part time with Team Penske (although not this week) and Simona de Silvestro, EJ Viso, Graham Rahal, Takuma Sato, Ana Beatriz and James Jakes are all in different seats this year. Katherine Legge, Ryan Briscoe and, regrettably, Rubens Barrichello are not present, at least not yet.

The track for this week is 14-turn, 1.8 mile temporary street circuit set up on the streets of St. Petersburg, Florida. Race distance is 110 laps for 198 miles, increased ten laps from last year’s distance. The 2012 event was won by Helio Castroneves, while last year’s pole winner was teammate Will Power. Sebastien Bourdais holds the track record of 1:00.928, 106.701 mph, set in 2003. All three drivers are entered in this year’s race. Television coverage can be seen on NBC Sports Network live at noon ET on Sunday with radio coverage on the IMS Radio Network and Sirius/XM 211.

We’re pointless right now. Not the racing, just the standings. Meaning it’s that wonderful time of year where everyone is equal and anything can happen. Check this space in our future previews though because we’ll keep you up to date on the drivers and the manufacturers and how they are doing once the season gets underway and they start putting points on the board.

Featured Driver: Simona de Silvestro. When we spoke to INDYCAR VP Mark Sibla, he picked de Silvestro as his breakthrough driver of the year and he’s hardly alone in looking forward to big things from the Swiss driver in 2013. She showed some serious potential in her first couple of years on the circuit, although last year with Lotus power was a disaster. Still, everyone knew it was the car and not the driver. Now she moves to a bigger team at KV Racing Technology and has veteran teammate Tony Kanaan by her side. She could really hit her stride this season and take that next step up.

Weekly Picks: Once again, your Frontstretch IndyCar experts will employ their expertise and demonstrate their knowledge of the sport by attempting to pick the winners of each race. This week, Matt Stallknecht is going with Scott Dixon and Huston Ladner is taking Will Power. Toni Montgomery thinks you can’t argue with success and is going with Helio Castroneves, a three time winner of this event.

Upcoming: The IZOD IndyCar Series takes a break for the Easter holiday weekend and returns to action on Sunday, April 7, for the Honda Indy Grand Prix of Alabama at Barber Motorsports Park in Birmingham, Alabama. The Toyota Grand Prix of Long Beach will follow on April 21 and then the Sao Paulo Indy 300 from Brazil on May 5 is the final stop before heading to Indianapolis for the big show in May.