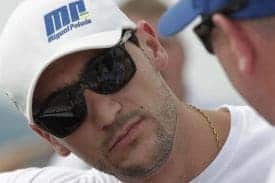 Well, we don’t have a whole lot of racing to talk about since we haven’t been on the track since Daytona. But we did test at Martinsville a couple weeks ago on a Tuesday and Wednesday. We had a brand new truck that we built for Martinsville. There were about four or five of us on the first day and seven of us on the second day, and we were super fast both days. Balance wise, we tested everything in the rear end of the truck and focused on the front end the second day. We got an idea of which way to go depending on what happens for the race. I told Jeff [Hensley, crew chief] that two days of testing at Martinsville, from 9:00 AM to 5:00 PM was similar to the amount of time we have the whole year in our normal practice sessions at the track all at once. It was nice to be able to test everything calmly without a lot of rushing. That brand new truck was really good, so I’m really looking forward to Martinsville. We have a new sponsor for Martinsville — SEM. I’m really excited about it because it’s a different and new sponsor that I’m looking forward to putting up a great finish for them.

Martinsville has a very similar feeling to a road course because off the corner you go back to the throttle almost 100%, because you have to slow down so much to turn. You hang in the straightaway and brake hard and have tight turns like a road course. Because of that, you need to manage your brakes, turn good, and have a good drive off. In a road course, you’ll have anywhere from seven to 12 turns in a single lap, so the drive off is really important, especially when you have a long straightaway. Martinsville is like two long straightaways with the hard racing and tight turns. It sounds simple, but it’s really tough. When we got there, the racing was pretty solid and our truck was really good in the test. It’s hard to stay at the same level the truck will be at, and it’s really hard to guess how race day will be based on the test since we only had a handful of drivers there. But I’m pretty confident we’ll be strong at Martinsville.

Miguel Paludo spent one of the last off-weeks before the Truck Series returns to action testing for next weekend’s race at Martinsville.

Joey Logano and Denny Hamlin have stolen the spotlight lately, and I’ve definitely been paying attention. As far as their rivalry goes, it’s really part of racing because that’s what the fans like — controversy, and guys running each other hard. I think the worst of it started at Bristol when they got together. After that, I think the California race was awesome. I watched the whole thing, and it was full of hard, clean racing to the very last corner. At that point, Joey just overdrove and got into Denny. As a race car driver, you never want to hurt someone, and it’s just so bad that Denny hit that wall so hard without a SAFER barrier there. I think NASCAR will probably do something about that. For me, watching as a fan I do think it was a great show for the fans. I’m pretty sure Joey would never try to hurt someone. I think he just drove harder in the corner to not let Denny get the win because of what happened last week. For me watching it as a fan, it was really good. That whole race was great, and Joey was super fast. He really impressed me — he was super fast. Even when he was running with Kyle [Busch] and on the restarts, I really thought he had that race won.

As far as whether the rivalry will continue, it’s really hard to say since it depends on just how long Denny is out. These guys will likely talk about it, but there’s a point where you need to focus on the championship and racing because if they keep crashing each other, they’re going to drop in the points.

Now, maybe Tony Stewart will do something, but who knows when. It could be the next race at Martinsville, it could wait until Homestead, or it may even wait until next year. Of course Tony had the right to be upset with Joey because he killed Tony’s momentum, but at the same time, Joey did exactly what he should have done. He was second and he wanted to lead, so he was defending his spot. In my opinion, both guys were right in that situation. I don’t know if Tony in Joey’s position would have done the same thing or not, but Joey is trying to win. He’s with a different team and needs to perform, and he was doing all he could to win that race. When the guys do that, I have to agree with that — it’s racing for the win. That’s all that matters.

Oliver and Patricia have both been sick lately. Patricia’s birthday was last Tuesday, and we had a party for a few friends at home. Oliver ate a lot of different things, from about 5:00 to midnight, and the next day he was a bit fussy. We figured he’d eaten a lot of different things that weren’t on his normal schedule, so we figured that was all it was, but on Thursday he started throwing up overnight. We took him to the pediatrician and they said we could go to the hospital then or wait until he’s really sick at 3:00 AM. So to be on the safe side, we went to the hospital, and he spent from Thursday to Sunday in the hospital. Now, he’s fine but Patricia got it. For her it’s a lot easier to deal with — Oliver had IV fluids for two days to recover, but she’s just at home resting. We seem to be having everything bad on the health side of things all at once. The racing has been good though, so I have no complaints so far. At least any sickness happening now, while I don’t have to worry about it while being at the race track.

With Easter coming up this weekend, our plan is to just stay home. We’ve spent two weekends in the hospital and just want to have some quiet time at home to rest before getting ready for Martinsville.

I wish we had more to talk about this week, but I’m sure next time we’ll have some great racing news to talk about. I’m confident in what we’ve got and all the guys are as well. We’ve tested at Nashville, we’ve tested at Martinsville, and in each test, we’ve been fast all along. I’m pretty sure we’re going to head to Victory Lane soon — I’m working so hard for it.

Photo of the Week:

Patricia has been sick, so Miguel and Oliver have been keeping their distance…and having fun while they’re at it! Photo courtesy of Patricia Paludo.