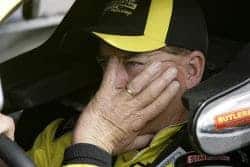 Sunday afternoon presented one of the rare times for the Camping World Truck Series to be in the spotlight; they put on just the race I expected them to. And though Kyle Larson thoroughly dominated the field, leading all but a handful of laps, there was still plenty of action throughout the race right up to the final caution.

Ron Hornaday, Jr. was hiding his head in shame Sunday over a late-race wreck with Darrell Wallace, Jr. he’d like to forget.

That’s when things went, well, crazy for lack of a better word. When Timothy Peters and Ryan Sieg got together, causing the yellow it was clear the field would be set up for an exciting green-white-checkered finish. But more than half a lap after the yellow came out, Darrell Wallace, Jr. was sent spinning and out of the race off the bumper of Ron Hornaday, Jr. Several replays later, it became clear that the veteran had spun the rookie intentionally in retaliation for earlier contact between the two.

The whole situation, like fans in the stands left me scratching my head; it was hard, even as a journalist who covers the Truck Series not to let the emotional frustration for Wallace creep into your head. What impressed me the most out of the whole situation, though was how calm and composed the rookie was after he exited the infield care center. After having run another strong race, he was wrecked out of the event with just a handful of laps remaining and still managed to avoid any name-calling. Instead, Wallace chose to get his hits in subtly, stating, “I seem like the veteran and not the rookie in that situation.”

I will give Hornaday credit for accepting the blame in his post-race interview. However, it still doesn’t excuse his actions.

“I didn’t know the yellow was out and I got down in there and started racing on the back straightaway, and he slowed up and then I ran into him a little bit,” Hornaday said after the race. “But down the back, I went over to the other side and I don’t know if he hit his brakes on me or whatever, but I turned him in the fence and I feel like a total idiot. Earlier, he picked me up down the back straightaway and tried to drive me in over my head already. I don’t know; I feel like an idiot for wrecking him.”

I have a very hard time believing that Hornaday didn’t know that the caution was out. He and Wallace, Jr. were more than half-a-lap past where Peters had his incident, and there’s no way his spotter just didn’t bother to tell him that the field was under caution. Plus, you could see from the in-car camera that Hornaday was clearly checking out his side window and his rear-view mirror to find out exactly where the No. 54 Toyota was on track before slowing down and ultimately turning Wallace, Jr.

But perhaps the bigger problem I have is how NASCAR chose to penalize the driver of the No. 9 Chevrolet. The sanctioning body chose to move him to the tail end of the longest line for the restart, rather than parking him. It’s funny since I seem to remember another driver being parked for an entire weekend after an intentional wreck in which Hornaday was on the receiving end at Texas in November, 2011. Granted, it was a different type of situation, with a Sprint Cup Series driver wrecking a Truck Series regular in that race. Yes, Hornaday was a title contender at the time, plus the speeds at Texas are considerably higher than those at Rockingham. But what doesn’t change is the basic principle of an intentional wreck under caution; that’s something the sanctioning body failed to recognize fully.

In the end, the whole situation was more than likely born out of frustration for the veteran driver, who last season posted his first year without a victory since 2003 and has run better than he’s shown in 2013. But that doesn’t excuse his actions by any means. While I can’t claim to know what Hornaday was thinking at the time of that wreck, I can say with a decent amount of certainty that he probably wasn’t using his head.

– How exciting is it for Kyle Larson’s crew chief, Trent Owens, to see the No. 30 Chevrolet head to Victory Lane with his son on the truck? Five-year-old Gray Owens is autistic, so his family lives the disorder each and every day, along with the one in 88 families that are affected throughout the United States. It was a nice gesture for a family man who’s one of the underappreciated mechanics in the sport.

– Did you happen to see just how many start-and-park efforts there were at Rockingham? Zero. That’s right; every single driver that failed to finish the North Carolina Education Lottery 200 ran at least 130 laps and was involved in some sort of wreck over the course of the day. Good to see the Truck Series field so healthy early on in 2013.

– How about Kyle Larson’s victory burnout? I don’t think I’ve ever seen someone doing one while holding their steering wheel out of the window. Since it’s Larson’s first career NASCAR victory, only time will tell if that will become his tradition, much like Carl Edwards’ backflip or Kyle Busch’s bow. Either way, I do admit it was rather entertaining.