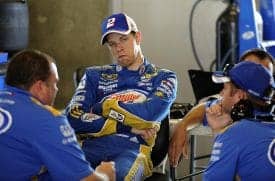 ONE: Brad’s Rant Was Quite Something. So Was The Lack Of A Fine

Brad Keselowski didn’t bother to hide his emotions, or his opinion this past weekend.

One of the things I enjoy the most about our current champion is that he is not afraid to speak his mind, giving his honest opinion. It’s a quality you need in a driver who is very much the face of the sport right now and, as the champion, I think it’s even more the case that Brad should say what he thinks. But when I first heard Keselowski’s forthright comments Saturday night, my immediate thought was that his two minutes was going to cost around $50,000 – especially when compared to Denny Hamlin’s much milder comments after the Phoenix race which resulted in a $25,000 penalty for the Joe Gibbs Racing driver.

But on FOX Business News Monday morning, NASCAR head honcho Brian France confirmed that Brad would not be receiving a fine even though he noted, “I would certainly disagree with everything he said.” France went on to suggest that Keselowski was just blowing off steam.

Well, yes, to an extent that was the case. Keselowski was tangibly and openly frustrated, but it does seem to me to be another consistency – or rather a complete and utter lack of consistency – issue with NASCAR. I’m all in favor of “have at it” and letting the drivers give strong opinions, but if I was Denny Hamlin I’d be parking myself outside the NASCAR hauler at Kansas waiting on a check for the money he was fined. NASCAR needs to find a happy medium here because the inconsistency is making them look more than a little silly.

TWO: Another Solid Finish For The Sheriff

Since losing his full-time ride when Red Bull upped sticks and quit the sport at the end of 2011, Brian Vickers has run just eleven of the next 43 Cup races; a small sample size for a driver with 11 years and 266 races under his belt. In that time, with the honorable exception of an engine expiration before he completed a lap at Watkins Glen, Vickers has run extremely well with two top-5 results – a pair of fourth-place finishes – seven total top 10s and a worst run of 18th.

If you’re involved in any kind of Fantasy League for NASCAR, you’ll know just how useful he’s become in that regard. This Saturday night, driving the No. 11 car for an ailing Denny Hamlin, Vickers finished eighth but with that recent string of strong runs, he wanted more.

“It feels great. Honestly, I guess I’m pleased but not satisfied,” said Vickers post-race. “A top-10, we ran top-five a lot of the night for the first time with a new team — the whole FedEx team. Like I said, we’re pleased, but I wanted to win. I guess that’s what we’re here for.”

It’s that kind of attitude that serves Vickers so well as he looks to get himself back into a full-time Cup ride in 2014 – likely the No. 55 Michael Waltrip Racing vehicle. If and when this opportunity occurs, it will be a testament to the sort of character Vickers is. He never gave up, making the most of his chances when given, however few and far between. Good for him, I say.

THREE: Kyle Busch Wins — Which Means Nothing Until He Proves It In The Chase

After slogging through a terrible 2012 season, by his own high standards, Kyle Busch has roared back to regular form in 2013, winning two of the last three Cup races and picking up four dominant victories in six races at the Nationwide Series level: an impressive start, no question.

The nature of Busch’s awful form in 2012 was a point team owner Joe Gibbs was keen to address in the winner’s post-race press conference. “I think back to last year, at the end of the year, Kyle probably had some of the most bitter disappointments, I think, that’s happened to us in 22 years,” said Gibbs. “We missed the Chase.”

The last few words are the part that really matters. Now, in 2013 it’s all chocolate and flowers so far but the simple truth is none of this really matters until we hit the postseason the driver typically stumbles in – and we’re not there yet. Busch has qualified for the big dance on five previous occasions, even earning the top seed but has never made any kind of sustained run once he got there. To showcase he’s grown, Rowdy needs to prove he can be a factor right through until Homestead and until that’s the case, all the newfound maturity we’ve been hearing about doesn’t mean an awful lot.

FOUR: A Trip to the Heartland

A quick word about this weekend’s upcoming race: the first of two trips this season to the tri-oval, mile-and-a-half long Kansas Speedway. This will be the fifteenth top echelon Cup event at the cookie-cutter circuit, one that opened back in 2001 with a race won by Jeff Gordon, the second since the track was repaved and variable banking added following the early season race in 2012. Last October’s event was won by Matt Kenseth, his 24th and final win driving for Roush Fenway Racing. As often seems to be the case when “the robot” wins, the race was more memorable for a rash of blown tires and cautions – 14 in all – than the actual competition. There were only two on-track green flag passes for the lead, one of which came on the very first lap and the other during a mid-race wreck.

So, with passing likely to be at a premium, expect the restarts to be particularly aggressive: something we’ve seen a lot of this year already as drivers get the most they can from fresh rubber. Truth be told, I’m not expecting a great race on Sunday but the last time I said that this season was prior to Auto Club Speedway. Here’s hoping my pessimism is equally as wrong as it was before Fontana.

And finally this week, I wanted to mention the continued struggles of Stewart-Haas Racing. Collectively across the three drivers, SHR has one top 5, six top 10s, a paltry 29 total laps led and nine finishes lower than 28th. From an organization that has pretty much had success from day one as a fledgling team, this start is not the one that anyone expected or wanted.

Tony Stewart, as most of you are aware, tends to start the season slowly but these stats are sluggish even by his standards. Ryan Newman has a team best four top 10s while Danica Patrick, outside of Daytona (8th) and Martinsville (12th) has found the going extremely tough. With a fourth team – Kevin Harvick – in the works for next season, it’s clear that SHR need to re-find their collective mojo (and no, I’m not talking about Smoke’s erstwhile monkey). The good news is, with things the way they are right now, the only way is up.