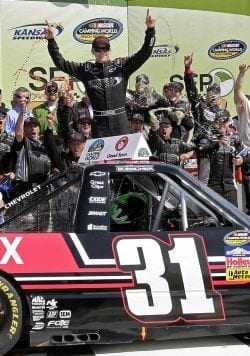 Turner Scott Motorsports driver James Buescher is running his fifth full-time season in the Camping World Truck Series. After showing solid improvement throughout the years, last season he finally broke through to victory lane at Kansas Speedway and followed that win up with three more before closing on the season as the 2012 champion. This season hasn’t quite started out the way the driver of the No. 31 team had hoped for, but with top-15 results in all three events so far, Buescher looks to improve upon that performance today.

Buescher, who led both practice sessions from Kansas, took some time out on Friday afternoon to sit down with Frontstretch.com’s Beth Lunkenheimer to talk about coming back to the site of his first career victory.

Beth Lunkenheimer, Frontstretch.com: We’re back here at Kansas at the site of your first career win. How excited were you to return to this track, especially since you won in such dominating fashion last year?

James Buescher: It was exciting last year, it was a dominating race, and you’d think we’d really be looking forward to it. I was looking forward to getting back to a mile-and-a-half. I didn’t get over excited because we were coming to Kansas. This race track is really different than it was a year ago with the repave and the change in the banking. I ran the Nationwide race here in the fall, and we did okay but had some motor problems. So I knew what to expect when we got here with the race track, but I knew that it was completely different than the race track we won on here a year ago. I wouldn’t say I was overexcited, but I was just excitedd to go to a mile-and-a-half race track and try to turn around the way our season is going.

Lunkenheimer: How much can you pull from the Nationwide race last year to be able to use this weekend?

Buescher: Not much. The race track is quite a bit different than it was then, and the trucks react quite a bit different here. The biggest thing is knowing what to expect when you pull off pit road for the first time in practice and not having to learn the race track—where you need to be and what line to run. It eliminates that learning curve, so it basiccally just sped up the process odf me knowing where I was on the race track when we unlaoded.

Lunkenheimer: I watched you atop the leaderboard for most of the first practice session. Did you have any struggles or anything to work on or were you strong straight off of the truck?

Last year, James Buescher claimed the win at Kansas. However, that was on the old track. Can he do it again?

Buescher: We had a list of stuff that we wanted to try, and everything that we did to change it made the truck better. It drove good for most of practice. We had a couple runs where it was just a little bit loose, but all of the changes we made just made it faster and faster. The overall balance was good all day long, and I think we have a really good Rheem Chevy to go out and race tomorrow with. It’s been acting really well with the changes, and so far it’s really fast.

Lunkenheimer: Coming into this season as the defending champion, are people looking at you with higher expectations for this season?

Buescher: I don’t think anybody can put higher expectations than I can put on myself. I think the expectation is there—everybody knows it. We really don’t have to tell everyone on the team “Hey, these are our expectations.” They all know it; they were all here last year, and they were all part of winning that championship. They know what it was like to go ahead and get that championship, and they want another one just as bad as I do. Everybody understands that and you don’t really have to repeat it.

Lunkenheimer: This season, your results haven’t shown the runs you’ve had on track during the races. Is there anything that you as the driver can do to help bring home the finishes that your performance deserves?

Buescher: We just need to find a way to get some good luck. We’ve had really strong runs, we’ve led laps in two out of three races and we’ve qualified in the top 3 two out of three races. We ran in the top 5 all day long in Martinsville even though we qualified bad and didn’t lead any laps. We just haven’t finished any better than 13th this year. Really about the only thing we have that is good is that we’ve completed all the laps this year even with all the things that have been thrown at us—getting wrecked by lapped trucks, having to change carburetors mid-race. Everything that’s happened over three races is kind of crazy, but hopefully all the bad stuff is over with so we can get this season headed in the right direction.

Buescher: Even though we got wrecked by a lapped truck last week [at Rockingham] and had to gain our lap back and get back up there and only got to 14th place, we still gained spots in the points. We didn’t close on the leader in the points but we gained a position, so that helps but you really want to gauge yourself off of who is leading the points. I wouldn’t consider it a gain until you’re closing that gap on the leader because you can make passes in points positions and not be any closer to leading. You have to keep your eye on that, and just because we gained some spots doesn’t mean we gained any on the championship. We need to keep eliminating mistakes and hopefully find some good luck.

Lunkenheimer: How important is a strong run Saturday when it comes to the overall championship picture with only 22 races on the schedule?

Lunkenheimer: Toward the end of last season and after you won the championship, a lot of people expected you to move on to the Nationwide Series. What went into that decision to stay in the Truck Series another year rather than moving up?

Buescher: There were a lot of things—I’m 23 years old and have plenty of time left in this sport. You see a lot of guys move up too fast and sometimes don’t make it. They either go start-and-park or they end up out of racing. They jump into the sport, make a big splash and then they’re out of it. I want to be in it for the long haul, and I want to make sure that I’m ready to go to the next level. With Rheem coming on board for the Truck sponsor this year, that made our decision even easier. So we decided to stay here for another year and see if we can go back up our championship with another and see about moving up next.

Lunkenheimer: I’ve got a couple of fun questions before we finish up. What’s the craziest thing a fan has ever asked you to autograph?

Buescher: I’ve had a lot of shoes—they take the shoe off their foot and have me sign it. Sometimes they just want me to sign their arm; I’ve had to sign a forehead before. There’s been some weird things. You get the occasional prosthetic limb—those are always kind of interesting to sign when they lay it up on the table. You get some interesting things for sure.

Lunkenheimer: Do you have any race day superstitions or meals you want to eat or avoid?

Buescher: None at all—make it to the drivers’ meeting, make it to driver intros and get to the truck on time is all.