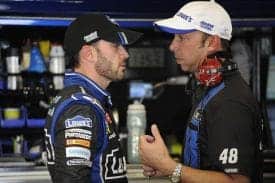 I haven’t had a chance to dig into E.L. James’ novel “Fifty Shades of Grey,” but I assume it’s about the life of a crew chief in the NASCAR Sprint Cup Series. After all, who spends more time in the gray area than NASCAR’s most creative minds?

Has Paul Wolfe been taking notes from the Chad Knaus school of crew chiefing? After all, you only learn from the best.

The gray area has developed a mysterious reputation, though like the Bermuda Triangle or Area 51. NASCAR fans don’t really know what’s going on in any of those places; they just know if you end up there, you could be in serious trouble.

According to series officials, defending champion crew chief Paul Wolfe may have spent a little too much time in the gray. He’ll most likely be taking a six-week vacation, but there is little doubt that Wolfe will end up there again at some point.

All the top crew chiefs do. The guy who sat atop the box for five of the last seven championships, Chad Knaus, practically lives there. He bought a summer home. Knaus has been fined and suspended on four separate occasions since 2005, more than any other crew chief in the garage.

Knaus’ driver Jimmie Johnson has also won more races, 48, during that span than anybody. He’s proved that winning in Sprint Cup is a game of risk versus reward. The fine line between the massive fines, point deductions and suspensions, in order to win races and championships is as thin as ever.

But that is the landscape. The field from 1st to 30th is as tight as ever because the cars are nearly identical, while new rules and templates are being introduced more often than new species are identified in the rain forest. The gray area is growing smaller, just like the Amazon. Maybe there aren’t 50 shades of gray left; maybe there are only 22.

Crew chiefs are going to keep heading back there, though. Living in Pleasantville, the place that’s black and white, will get you midpack at best in Sprint Cup.

NASCAR isn’t exactly Formula One, but it is still a sport ruled by those who innovate. Just look at the most successful drivers in each era. We are currently in the Johnson Era, by the way, one that has featured numerous fines and suspensions against the No. 48 team, but it will be defined above all else by wins and championships. The span preceding it, the Gordon Era, is judged the same way. Gordon’s crew chief Ray Evernham didn’t face the scrutiny of Knaus, but he did push the envelope, enough so that in May 1995 NASCAR issued him a $60,000 fine for unapproved suspension parts smacked on Gordon’s Chevrolet. At the time, it was the largest fine in NASCAR history.

The list could Rolodex back to the start of the sport, in 1948. In 1952, Tim Flock was disqualified from a race after NASCAR discovered that Flock’s roll bars were made of painted wood to make the car lighter. After Darrell Waltrip was caught using nitrous oxide at Daytona, in 1976, he uttered the words, “If you don’t cheat, you look like an idiot.”

It’s still true, but it goes the other way, too. After Brad Keselowski said last year that his organization didn’t spend time in the gray area, they were caught red-handed and now will face the label of “cheaters,” whether it is right or wrong. Even those who spend their professions innovating don’t want to be called cheaters.

“I think it’s pretty obvious that defining cheating in this sport is something that’s been very poorly done,” Keselowski said last week, “and I think (the media) are the ones that need to step back and try to figure out how to define that better because, clearly, this garage is having a hard time doing that.”

NASCAR made sure that Penske Racing paid the price. I’m not just talking about the two $100,000 fines, either. Penske not only lost Wolfe and Joey Logano’s crew chief, Todd Gordon, but also its car chiefs Jerry Kelley and Raymond Fox, team manager Travis Geisler and team engineers Brian Wilson and Samuel Stanley. If they do lose their appeals, who is going to set up the cars? The kid sweeping the floors at the shop? Larry from the Quickie Lube down the street?

NASCAR felt it had to be harsh, or else the message would be lost. Stay away from the gray.

Wolfe and Gordon will be like the two kids you put in timeout for misbehaving, where you hope that separating them from the others will teach them the lesson not to misbehave again. Instead, they’ll probably spend that time plotting about how they will misbehave again — but this time get away with it.

That’s what they are paid to do. The best crew chiefs and teams constantly push the limits in a high-stakes game of risk and reward. One day, you’re the best, the next you are a cheater, but those who don’t push at all aren’t trying hard enough and won’t be remembered.

That’s life in the dark, murky landscape known as the gray area.