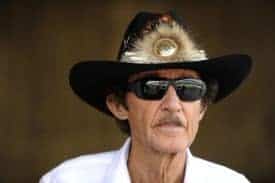 Did You Notice?… One of the biggest statements from Kansas has been swept under the radar… until now? Richard Petty, when interviewed matter-of-factly Friday suggested that someone had to snitch on Penske Racing in order for them to be facing the 500-foot pool of water they’re drowning in now. It was more than a coincidence, said the King for NASCAR to pick apart their cars, pre-race inspection all of a sudden and then throw the hammer down in terms of suspending everyone but the waterboy in that organization for six weeks.

“They passed two or three inspections and hadn’t been caught,” he said of the Texas incident, going on to say that based on past experience, it’s clear as day someone “must” have alerted authorities about suspect rear end housings.

Last I checked, Mr. Petty – despite his Ford affiliation – has one of the best, clean-cut reputations in the 64 years NASCAR has been in existence. (Otherwise, why make him a first ballot Hall of Famer?) Add in the garage rumors about Hendrick Motorsports “snitching,” ones adamantly denied by the organization itself ever since and suddenly, battle lines are drawn in the sand. There will be some whose perception now, whether right or wrong is that Penske’s current troubles, regardless of if they’re guilty are the result of not NASCAR officials but the power of a rival organization.

That’s of concern to NASCAR; if not, it certainly should be considering Hendrick, in its last brush with the law saw its biggest penalties wiped off the face of the planet by former General Motors employee and current National Stock Car Racing Commissioner John Middlebrook. Always questioned by some more like a Sopranos episode than a legitimate decision, back in mid-2012 it’s fuel to the fire that gives this controversy more legs. Two sides form every story, but as we’ve seen with the NRA debate as of late when one side is so passionate, they’re willing to change the channel based on a cause it doesn’t matter which one is right or wrong. NASCAR loses, plain and simple and this type of debate could cause emotions to rise to that level once again.

NASCAR, with the box its painted in finds themselves in a lose-lose situation. Should the Penske penalties be reduced on appeal there will be many, including the Hendrick contingent who claim they got away with one. But should the penalties stay the status quo, especially with this reported speculation a growing feeling that HMS is above the law when it comes to these types of situations will only increase.

With late-breaking news Matt Kenseth’s engine may have incurred some type of violation, at Kansas for Joe Gibbs Racing and Toyota that brings the Hendrick-NASCAR relationship into even greater focus. Without question, the three teams who have shown the ability to contend for the title this season are Penske, Hendrick, and Joe Gibbs Racing. Should consequences come down on Kenseth’s motor, that leaves HMS – the current 1-2 in the point standings – as the only ones to have made it through the first eight races “clean.”

Again, NASCAR may find itself in a position where they’re damned if they do, damned if they don’t. Back in 2007, with NASCAR’s Generation-5 car Hendrick was head and shoulders above everyone else. The championship battle, which unfolded between Jimmie Johnson and Jeff Gordon saw those two drivers alone win 16 of the 36 races on the schedule. It would not be surprising, in the least that HMS is so far ahead of the curve, a second time its closest rivals are throwing every trick in the book at their equipment in order to keep up. That’s why the best teams are so successful; they’re on top of their game when major changes are released. These penalties, for Penske and perhaps Joe Gibbs Racing might be nothing more than flat out cheating, the only way to stay step for step with competition.

The problem is an officials’ push to clamp down on that won’t be 100 percent perceived that way, even if their actions are perfectly legitimate. And that, right there is the heart of NASCAR’s credibility crisis, tied to a team that’s won five out of their last seven championships which makes this math problem a complicated one to solve.

Did You Notice?… Chase points scored on the first four tracks we’ve been to on the schedule? The stats reveal quickly why Jimmie Johnson has darted out to a 37-point lead atop the standings…

As you can see, Johnson has a clear edge, finishing no worse than sixth at any of the four “playoff” facilities we’ve visited to date. Of note, Keselowski would be second on this list without the 25-point penalty he received at Texas; Logano, in contrast would not even be close to the top 10. But the numbers, on paper are disheartening for those looking towards a tight battle in the Chase. If Johnson can pull away, this quickly now what’s to say he won’t have even more speed once the postseason starts this September?

A look at these numbers, alone could alter a few oft-reported storylines. Take Clint Bowyer, for example. Having led one lap all season, sitting ninth in points people are quick to throw the “runner up hangover” label on him. But maybe Bowyer’s not in such a bad position as some might say. Last season, it took until the summer for him to win a race (Sonoma) and as we’ve seen many times, you don’t have to dominate the regular season to win a title – simply put yourself in position to make the playoffs. Bowyer, while rivals with something to prove like Matt Kenseth peak early on could very well be saving his best stuff for this Fall. Ditto for Carl Edwards, who has cooled off after a hot start yet sits fourth on this list with a win at a Chase track (Phoenix) already to his credit.

On the flip side, the numbers get worrisome when we talk about a guy like Dale Earnhardt, Jr. Earning just 104 points at Phoenix, Martinsville, Texas, and Kansas that put him behind drivers like Marcos Ambrose, Tony Stewart, and Jeff Burton, all drivers whose starts make you think they won’t be remotely close to the postseason come September. Even if Earnhardt makes the field, which he’s still in perfect position to do early results would indicate “longshot” at best. With their shopmates running roughshod over the field, Junior and Company need to learn the Gen-6 setups that have the No. 48 so successful these days no matter where the Sprint Cup Series unloads.

Did You Notice?… Quick hits before we take off:

The NASCAR-built Dodge Chargers have been sitting dormant, so far eight races into 2013. But will that be the case forever?

– I believe Ralph Gilles when he says Dodge isn’t getting back into NASCAR anytime soon. But something I found interesting Sunday: did you know the Dodge Dart is, indeed sponsoring segments of the race on FOX’s scroll at the top of the screen? You know, the one your eyes are constantly looking at when you’re trying to figure out where in the hell your 25th-place driver is on the track since the network won’t show it (but I digress.) Those types of sponsorships aren’t cheap. I’d say if Dodge felt stock car racing was bad for its bottom line, it would be out altogether; no commercials every now and then, no popping up on the scroll, not even a “no comment” when asked about their future plans. It may not be 2014, in part because a top team won’t make themselves available but make no mistake: over the long-term, they’re still lurking as a potential NASCAR participant.

– While we’re on the subject: have you not seen the national commercials for Travis Pastrana driving a Dodge Dart? “I’ve still seen this recent one”: http://www.youtube.com/watch?v=VII6-MxT6zI pop up during major TV programs, which makes me scratch my head as to why NASCAR and Ford aren’t putting the hammer down. Isn’t Pastrana supposed to their new stock car prodigy? Instead, he’s still reinforcing to the 18-to-34-year-old sect his branding, and the sport they should be watching is rally racing over at the X Games.

You’d think, at some point considering he’s running for Roush Fenway Racing full-time Ford would pony up the cash and have this icon making more commercials for them. It’s a weird deal, in the sense Pastrana to me should be working to switch brand identification if NASCAR’s truly his future.

– The latest sign Juan Pablo Montoya’s career is in intensive care? Three races after Denny Hamlin’s injury, he is one of only two fully-funded drivers that have yet to pass him in the point standings. Sitting 27th, he’s three points behind Hamlin, 45 outside the top 20 and already 98 outside the 10th-place position in the standings. Did I mention the highlight reel for Richmond, up next? Ryan Newman’s fist smiles with nostalgia at those memories.

I don’t know what the answers are to fix the No. 42; chances are, Chip Ganassi doesn’t, either considering teammate Jamie McMurray’s sitting pretty at 11th in points. But you’ve got to think, by now Target is poking the car owner in the back and asking when they’re going to get a driver that’s competitive. Kyle Larson, anyone?

– Huge, late-breaking decision to penalize Johnny Sauter 25 points for an unapproved fuel cell this Wednesday. Without it, Thorsport looked poised to run away with a title; now, at least things will get somewhat interesting although Matt Crafton, the new leader by 13 looks to be hitting on all cylinders as of late. It gives him that opportunity to take charge as for Sauter, who lost his crew chief for the next four races that loss of chemistry will hurt him much more in this small-time effort than, say, a Sprint Cup program.