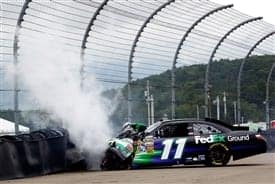 There is something to be said about brand identity in NASCAR. After all, there are Jeff Gordon fans who still refuse to drink Coke because of his association with Pepsi, and those who hate Jimmie Johnson will shop at Home Depot before stepping foot in a Lowe’s. Similarly, Dale Earnhardt, Jr. fans have somehow developed a sweet tooth for AMP while Carl Edwards fans now use UPS for all their shipping needs.

However, there is always the rather unfortunate sponsor that generates attention simply because of what it represents. Bordreaux’s Butt Paste has sponsored several underfunded teams in the past, and the driver of that car usually received more publicity in the span of one weekend than they would in their whole career. ExtenZe made 2010 one of the funniest Rookie of the Year battles in NASCAR Sprint Cup Series history, even though it was rather uneventful in terms of participants.

However, neither of those sponsors were usually up front, let alone generally competitive. It’s not until big name drivers are the ones backed by a zany business that it becomes really entertaining.

Enter Juan Pablo Montoya. More well known for his jet dryer flub in Daytona last year than his stock car racing prowess on ovals, he’s been in need of some good publicity lately. So, this weekend in Richmond, he was chaperoned onto the racetrack by a rather unlikely sponsor: Depends.

Yes, the adult diaper Depends. Yeah, you’d think this would be a good fit for race car drivers, who frequently receive the question, “But … how do you go to the bathroom?” from those who are generally uneducated about the sport. Yet it was Montoya, of all people who was flying their flag in Richmond.

Boy, did the jokes fly, especially because Montoya was no snoozer in this race. He led 67 laps, and during that time, Twitter was abuzz with amateur comedians who just couldn’t keep it to themselves. Yes, I was one of them. They were just too easy, too fun, and too giggle-worthy. The fact that Montoya was a legitimate contender in that race made it all the more interesting.

Now, will Montoya be able to shake this running joke and continue his hot streak? Well, my friends … it depends…

Now, on to your questions:

Hard hits can happen anywhere and anytime, particularly at Talladega. Should Hamlin risk starting the race, just to have a shot at the Top 20 and notch a win to make The Chase this year?

“So I’m really excited Denny Hamlin has been cleared to start Talladega! But I’m really worried he could make his injury worse. Even if he starts and gets out of the car, isn’t there still a risk? What is Joe Gibbs Racing’s plan if something happens?” Shawn

Um … they pray? I don’t know because it doesn’t make sense to me, either.

To be clear, though, Hamlin has not been cleared by NASCAR to start Talladega. He has been cleared by his doctor, but not by NASCAR. There is still more to the process than someone saying, “Yes you can, but you really shouldn’t.”

In terms of what will happen once, or if, Hamlin is cleared to race, he’s supposed to get out of the car after the first caution. Considering that Talladega is known for its vicious hits, that hardly seems smart. That’s not even the half of it, though. We ran through most of this criticism in Mirror Driving, but I just can’t wrap my head around why this push is worth the risk. You’re right; Hamlin could cut a tire or something insane could happen and then what? He’s out for his career, forever sidelined by an injury that just needed more time.

I’ll be curious to see how the rest of this process plays out for Hamlin, though I hope better judgment prevails in the long run.

Penske Racing may be without its braintrust for the next several weeks. Will they be able to rebound later this year to have another shot at the Sprint Cup?

“Summer, I know you’ll shoot straight with me. What are the chances that Penske’s penalties get rescinded? I really want to see Brad go back to back.” Seth

Well, if John Middlebrook’s history (cough, Hendrick…) is any indication, they might get it reduced. I can 99% guarantee that it won’t be completely overturned, but they might get some of the suspensions lifted.

That’s a huge “might,” though. If Penske wasn’t able to convince the appeals panel that they did nothing wrong, it might be difficult to go one step higher and fix the whole issue entirely. I wouldn’t be any less surprised if the penalties were upheld just as they are now. Seriously, there is no telling with NASCAR. They tend to go the opposite direction of what you expect, and at this point I’m not sure what to expect. There isn’t much that would surprise me aside from a complete overturning of the penalties which, like I said, won’t happen.

As far as Keselowski winning the championship, I find that unlikely. Not because of the penalty, but because he’s not Jimmie Johnson and I don’t see him going against the competitive field like that again. It’s someone else’s turn now, don’t ya think?

Lost in the aftermath of the last lap incident at Daytona in the Nationwide Series has been the plight of Michael Annett, who broke his sternum in this devastating crash. He has still not yet healed to get back in the car, nearly three months later.

“I don’t care about Hamlin. Whatever happened to Michael Annett?” David

He’s still in a recovery process, though, like Hamlin, he was actually wanting to return this weekend in Talladega. For those who are out of the loop or just forgot, Annett has been out since the Nationwide Series race at Daytona in February. He suffered from a broken sternum and was expected to be out two to three months.

Annett underwent a scan last week and the doctors said that the metal plates and screws that were put in during surgery aren’t fusing together as quickly as they need to for Annett to return. The issue, according to Annett, was not that his doctor didn’t think he was physically capable of running, but rather that his body couldn’t withstand another tough impact. That’s not an overly cautious assumption considering they are racing at the same type of racetrack as Daytona this weekend.

Annett is undergoing physical therapy right now to ensure he is ready to go as soon as he receives medical clearance. Reed Sorenson has been filling in for Annett for the time being, and he’ll continue driving until Annett can get back behind the wheel.

My question for you: Are you surprised that, given NASCAR’s investment in safety for these cars, that we still see these severe injuries?