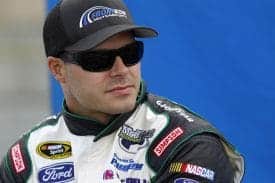 When David Ragan crossed the finish line first during last weekend’s Aaron’s 499 at Talladega in the Sprint Cup Series, I immediately thought of another race.

The date was June 17, 2006; the place, Kentucky Speedway. Most of the players are different, save for one. On that day, another David slayed the Goliaths of NASCAR, this time in the then-Busch Series. Piloting a low-budget, all-black No. 84 Chevrolet, David Gilliland defeated J.J. Yeley en route to his first win, shocking a sport that had become so used to the big guns on top.

Kentucky was Gilliland’s seventh race with the fledgling Clay Andrews Racing team, which was led atop the pit box by veteran Penske crew chief Bill Wilburn. His average finish in the team’s previous races was 32.75, with a personal best of 29th. He failed to qualify for two other races, including at the team’s previous attempt at Charlotte.

David Gilliland may have been watching his Sprint Cup teammate win last weekend at Talladega, but he was the one that held the trophy at Kentucky in 2006.

Gilliland himself was no household name, either. His dad, Butch, was an infrequent competitor at NASCAR’s highest level and a longtime driver in the Winston West Series, scoring the championship in 1997. The younger Gilliland had found some success in the same series, and had made his NASCAR national series debut in 2005 at the age of 29. In two Busch Series races that season, he finished 43rd both times.

But sometimes, the stars align. Sometimes, things happen that no one expects.

He had to beat out two Joe Gibbs Racing cars to do it, but after 200 laps around Kentucky Speedway, David Gilliland came out on top. He didn’t just beat them on fuel mileage, either. The No. 84 was near the front of the pack all night and led the last 11 laps of the Meijer 300. A legitimate win, through and through.

Plus, get this: in the preceding 15 races that season, Cup regulars had won every event, which only made Gilliland’s win sweeter. And the team to do it wasn’t even a full-time Busch Series effort. The win propelled Gilliland to prime time. Not long after his win, he was promoted to Robert Yates Racing’s No. 38 Ford in the Cup Series, where he has remained to this day.

On Sunday, he was in the underdog seat again, piloting a Front Row Motorsports car, as he has the last few years. He didn’t win this time around, but Gilliland did push teammate David Ragan to the front of the pack at Talladega for one of the biggest NASCAR upsets in recent memory.

The wins of the two Davids teach us that these things are possible. These things happen. Even when it feels like the same guy is dominating each week, a surprise is coming. It may take five weeks. It may take five years. But every once in a while, an underdog is going to steal away the crown.

Remember that the next time you see a seemingly struggling team in the Nationwide Series, or in any other racing series you follow. Sure, maybe Jamie Dick’s season isn’t off to the start for which he might have hoped. Though Mike Harmon’s No. 74 team is enjoying its best season in the series, he’s still running toward the back at most races. Perhaps Johnny Davis Motorsports has simply had horrible luck.

Just remember that anything could happen at Darlington, or anywhere else. The status quo may go unopposed for a time, but every so often, the Clay Andrews Racings and Front Row Motorsports of NASCAR have their day.

And when they do? Let’s be honest, the celebration tends to be pretty awesome.

– Viva Motorsports isn’t entered this weekend at Darlington, missing its first race weekend of the season. The team, which has fielded Jamie Dick in its No. 55, so far and sits 29th in owners points, is looking for an additional driver with funding to help fill out its schedule. Currently, Viva only plans to run about half the schedule, but is willing to run more with more drivers.

– Despite originally announcing that he would debut in the Nationwide Series at Darlington this weekend, Matt DiBenedetto seems to have scaled back his plans with Vision Racing, as he is not on the entry list for the VFW Sport Clips Help a Hero 200. A recent tweet from DiBenedetto explained that he was now looking into either Darlington or Charlotte as a starting point, so it may be safe to expect the former Gibbs driver there. DiBenedetto’s teammate, Tanner Berryhill, is entered this week in the No. 17.