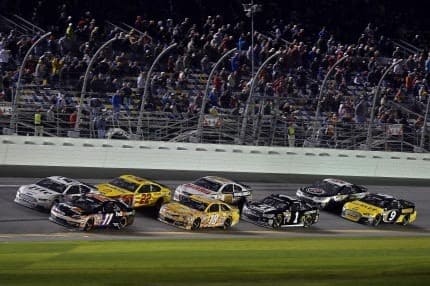 Parker Kligerman has a promising future in racing; of that, there is no doubt. It’s just that stock cars, despite years of building to this point ultimately make up just a fraction of his life. This athlete, unlike others consumed by their sport has plenty of outside interests Kligerman feels make him more focused when he _does_ turn towards competition.

One such “hobby” is his new business venture, Nootelligence, poised to pop up in stores nationwide throughout 2014. We transition into how he’s managing a non-NASCAR product, balancing racing and non-racing portions of his life and whether self-funding will be a necessity for drivers going forward, among other topics in Part II of his Beyond The Cockpit conversation.

For Part I of the Kligerman interview, click here.

Tom Bowles, Frontstretch: So tell me about Nootelligence.

Kligerman: Nootelligence came about last summer. My buddy, Ian O’Connell, who’s now the CEO of Nootelligence and co-founder, he started talking to me about this thing called Nootropics. And the reason it came up is that for a lot of our friends, in that area of the Northeast, the pressure on kids in school to excel and to do well has forced them into these ADD drugs. And he was one of those people that always turned to ADD drugs from his doctor and such, just to focus and get better grades.

So he ended up walking out of Boston College, with a degree in finance and did very well. Scored a high GPA; very bright kid. And he came to me and started talking about this. I thought, “Wow. This is very interesting. Is anyone else doing this?” And he said, “No, I don’t think so.” He, at the time was starting to get into it, to get away from ADD drugs and find an all-natural alternative that didn’t have the side effects. Something that didn’t affect him because he felt like some of these ADD drugs were starting to give him ties that made him feel achy, weird – they were wearing on him. He didn’t feel like it was natural.

And so he’s like, “I’m buying these powders and things online, I’m mixing them myself…” It’s all legal, it’s all online, you can get it anywhere, at drug stores… but he said he was doing it all himself and I said, “Well, why don’t we just make it?” So, we started throwing names around. He was like, “I want us to have ‘noot’ in the name, because that’s nootropics, that will give people the idea. I think it’s something that will really grow.”

So I came up with the name “Nootelligence” and it started to grow from there. We started signing a contract at his house, last summer, and we’re coming to market now at well under six months. It’s been a long ride, and we have two full-time employees, Ian and someone else, another buddy of mine. We have extended employees and some interns coming in soon, and we have an office up in Fairfield, CT. So it’s really grown; we’ve done everything with top-notch suppliers.

The blend, for everyone we’ve given it to and tested it with loves it, really helps them out. And the idea behind it is we want people to say, when they want to focus or feel like they’re really on top of their mental game, they don’t need to turn to coffee. They don’t need to turn to ADD drugs. Take something else. We’re here to say there’s something else out there: Nootropics. And hopefully, we can be the face and brand name of Nootropics, and really bring it to the public light to say this is an all-natural way and not a highly caffeinated way of saying, “I’m focused. I’m ready to do things” and have that little boost in your day.

Our company name is “Focus now — solutions” and the brand is “Nootelligence, focus.”

Bowles: People that have started these types of products, it seems their biggest hurdle is convincing larger chains to sell it in their stores. How are you doing with that and what’s been your approach?

Kligerman: So, it’s been incredibly tough. My Mondays are spent, a lot of this stuff on my connections and a lot of things I’ve been able to make through racing. Racing is a huge marketing platform so here, everywhere I go there’s a CEO of Target, CEO of X-Big Box Retailer, CEO of any retailer and I’m able to see some of those people. Ask some questions, rely on them, say, “Look, this is something I’m doing. I just want your info. Your help.” Brandon Davis has been a big help in giving me some contacts.

And it’s just using this world that I’m in and around. Most kids wouldn’t have that opportunity. Ian and Jeff, who’s also there, they work incredibly hard. They do a great job of building this company and starting to understand the retail world.

For being a small, startup company I think we’ve had a lot of success. I would say that getting into stores, it’s been a learning process. Racing will help that. We can show that we’re doing a lot of marketing through racing, things I can provide at a lower cost compared to if another company walked up to me… I think that’s one of the biggest things we’ve been able to show. A traditional marketing program, along with the idea that we’ve actually invested a ton of time and resources into guerrilla marketing, social media marketing, that sort of thing. We’ve really stayed true to our core demographic of who this product really is for.

Bowles: Simple question: how do you find the time to do all this stuff and race?

Kligerman: Time? I don’t sleep. I’ve got a little mobile office I take on the road – my iPad, my Mac computer, and then two iPhones – including a business phone. But the business knows racing comes first. And everyone in my world knows racing comes first. I don’t ever want anyone to think it distracts me. It’s a hobby for me on the side. I enjoy it. I don’t have a hobby. I don’t have anything else besides racing I’ve ever done. My family has a long history of entrepreneurship. My dad. My brothers. My dad’s dad. So I thought it was just natural for me to feel like this is something I’ve wanted to do. I’ve always felt I understand the business world because of the world I’m in, in terms of marketing and racing being such a business world.

I had an idea, so this is something I can do on the side, I enjoy. It’s something I can build with some friends and provide a product we really believe in and feel like can help a lot of people.

Bowles: Transitioning into the racing world. You’ve got a lot of funded rides these days, and there are a lot of people that must bring money to the table. How does this experience, with Nootelligence help you to make those connections you need to get money to race?

Kligerman: Well, I write for Jalopnik, biweekly, just another thing that I do. I’m tired a lot… sometimes, my dad calls me and asks, “Have you slept?” And I’m like, “Nah, I’m just going to work out…” I try to fit that in, too.

Anyways, I believe that our sport is in a pivotal position in which it is at the precipice of the ability not to rely on marketing. And the reason I say that is because of the idea live sports are so viable to TV now, and – as you’ve seen in the 40 percent increase of TV revenue in the newest package – a lot of sports, especially ours are going to benefit from that. I think ours will benefit the most over the years to come.

I really feel like this sport is starting to put itself in position where the sponsorships are going to become less of an issue and that the sport will be more self-sustaining in how it funds itself. That will allow rides for drivers who just simply want to drive.

I think it will be something we’ll see happen in years to come, over time. Naturally, in the model we are now, in our efforts to reach younger fans, you’re going to see the fruits of those labors in the years to come. I really feel like this sport, or any live sport is going to put itself in position where the revenues are getting so high and so valuable, it’s only a matter of time where the sport can really help its competitors as well, just as much.

You know, Austin Dillon was in the rookie seminar at Daytona and he was talking about his cowboy hat, all that stuff. He had some smart words: what happened, in recent years was a lot of kids hid themselves from the public eye. A lot of the guys that came in, during the early 2000s, ones you see now people say have no personality.

Well, they do have personality. They just hate it because they were told this was what they had to do. And I think what this sport is allowing everyone to do now, and it’s really exciting – NASCAR is pushing it, the sponsors are pushing it – is to show your personality and be you. And I think Austin does a great job of that. I feel like I’ve always been able to be me, in front of the camera, people, the sponsors. You still have to have that fine line of knowing this is me, all while working in your sponsor support the right way. But this is me, genuinely me, all you’re going to get… the guy in front of you.

Bowles: You think the sponsors will stay good with that?

Kligerman: Yes. The sponsors are getting better with it because they’re seeing the value in it. NASCAR’s seeing the value in it. Everyone is seeing the value in being genuine, being you. With social media and all the things that you can do now to be directly in contact with the fans, they can understand so much about you personally that, ten years ago, they didn’t. All they saw on TV is all they saw. So now you can do so much more to put your personality up there and see it. Understand it all, behind the scenes and be very smart about it… but then just be you. I think you’ll see with 50 Cent; he’s such an intelligent guy. Critics might be ignorant and say, “He’s a rapper, he got shot nine times, there’s no way…” But he’s an intelligent guy, really intelligent.

No one gets to a certain level without being smart, being educated. So I’d say just focus on that as much as you focus on driving, and that’s why performance matters.

For more on Parker Kligerman’s new business venture, or to learn about Nootelligence be sure to visit the company website filled with useful information on the product.