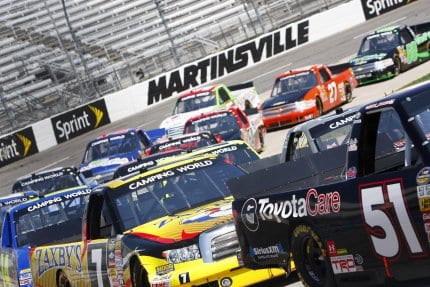 Following an exciting race at Daytona International Speedway, opening the 2014 season, the Camping World Truck Series heads off to … a five-week break before returning to the track at Martinsville Speedway on March 29th. It’s not all that exciting, huh? In the meantime, we’ll take a look at this year’s rookie class. *Tyler Young, Tyler Reddick, Ben Kennedy and Mason Mingus* all have plans to run full-time this season in hopes of capturing the Sunoco Rookie of the Year Title.

Texas native Tyler Young began racing Go Karts at the young age of eight years old, and in 2004 he won the International Karting Foundation (IKF) championship. From 2005 to ’08, Young ran Hobby Stocks, Sport Modifieds and Modified cars until his family-owned team packed up and relocated to Mooresville, North Carolina in hopes of moving into NASCAR one day. The 24-year-old then made his Truck Series debut in 2012, at Rockingham Speedway where he ran 28th (but finished the event). Prior to the 2014 season, Young had made 11 starts, posting a best finish of 19th at Texas Motor Speedway in 2013.

Fast forward to last weekend’s race at Daytona, where Young ran well for much of the event. Though he was shuffled around in the running order, he ran as high as 13th before being left to drop back through the pack. While working his way through once again, Young got caught up in the “Big One” and was left to settle for a 34th-place finish.

“I learned a lot tonight and ultimately tried to avoid the ‘Big One,’ but it didn’t work out in my favor – I guess that’s what you have to expect when you come to a superspeedway,” Young said of his first race at Daytona. “I can’t thank everyone enough for working hard and getting this truck here. It was fast and we had a really good run tonight. This is the first new chassis from this Young’s Motorsports team, so it’s a true testament of what we are capable of. We will regroup and head to Martinsville, where we can hopefully redeem ourselves.”

Tyler Reddick made a single start in the Truck Series last year before signing on with Brad Keselowski Racing full-time this season. He began racing Outlaw Karts at age four and hasn’t turned back, setting several milestones as a young driver. Having caught team owner Brad Keselowski’s eye while racing in the Truck Series, the 2012 Sprint Cup Series champion quickly snapped him up.

After starting 10th at Daytona, when the field was set based on practice times, Reddick maintained his spot inside the top 10 until a competition caution on lap 20. At that point, a clutch issue caused him to stall leaving pit road and dropped the driver of the No. 19 Ford through the running order. The mechanical troubles remained, but the young rookie held in — and his efforts paid off. Having survived the “Big One” with only minor damage, the freshman drove his way to a solid 12th-place finish.

“I am so thankful to Brad Keselowski for the opportunity to drive his Reese Towpower F-150 at Daytona and throughout the majority of the 2014 season,” Reddick said. “It was a dream come true to race at historic Daytona, and I was able to develop a great relationship with my team and learn a lot at my first start. Look forward to getting into the Broken Bow Music Group Ford in a few weeks at Martinsville!”

Next, K&N Pro Series East driver Ben Kennedy joined Turner Scott Motorsports this year to pilot the No. 31 Chevrolet full time. Before joining the K&N Series, Kennedy boasted championships in Pro-Truck and Super Late Models. He’s not the only one with those types of trophies, either; calling the shots on the pit box is champion crew chief Mike Shelton, who led James Buescher to the 2012 series title. It’s a great setup for a driver who can’t shake this other trivia factoid: Kennedy’s the nephew of NASCAR CEO Brian France.

After starting on the pole for the season opener, the young driver led the first 52 laps until he stalled leaving pit road under the second caution. As a result of failing to maintain his speed under that yellow, he was dropped to ninth in the running order and eventually finished 15th.

“Tonight was really special. Being out there in front of the field for so long was really cool. It’s amazing how quiet it is on the racetrack when you’re at the front of the pack,” Kennedy said. “I can’t even express how amazing it was to lead my first laps ever in the Truck Series at a track that is so important to my family’s history.”

“My Turner Scott Motorsports team built me a really fast truck, and we’ve been proving that we were dominant since we first hit the track back in January for testing. I’m really not sure what happened with the stall on pit road; I’m going to review the race footage and go over the details with my crew chief Michael Shelton to be sure that I don’t have an issue like that again. Ultimately, this wasn’t the finish we wanted, but we had a great night and a great weekend overall.”

Last, but not least, Mason Mingus made his Truck Series debut at Talladega Superspeedway last year but managed to run only five laps before a hole in the oil pan caused his truck to billow smoke, relegating him to a 36th-place finish. In his final two starts of the 2013 season, Mingus finished 22nd and 25th at Phoenix and Homestead, respectively.

This season, the 19-year-old pilots the No. 35 Toyota for Win-Tron Racing. Much like fellow rookie Tyler Young, he was also caught up in the lap 73 caution and unable to continue competing. He starts the year with a disappointing 28th-place result.

“Wow, that was the biggest hit I’ve ever had. I’m proud of my Win-Tron team as they gave me a solid truck this weekend,” Mingus said. “We were fast and we had a great race truck in traffic. We were just logging laps setting ourselves up for the end, trying to take MadVapes to Victory Lane, but there was no chance to save it after getting hit. I feel bad, as that was a great truck that’s now destroyed, but I can’t thank my team and MadVapes enough for a great weekend. We’ll be ready to go get them in Martinsville.”

The 2014 rookie class brings another set of new talent to the series, all focused on their hopes to become NASCAR’s next big star. While it’s hard to determine which of these drivers will succeed after just a single race, it will be great to watch these young drivers grow throughout the season.