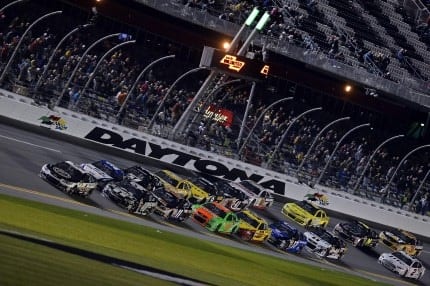 It’s been said that the year starts in earnest at Phoenix, after the pomp and circumstance of the Daytona 500 is in the rear-view mirror and teams can get down to the type of racing they’ll do for most of the season, a different animal entirely from the tight packs and chaos of the restrictor plate races they’ll see just three more times in 2014.

This year, the Daytona 500 could be a hard act to follow, though. Many fans and media are calling it the best version of the Great American Race in years, and that puts a bit of pressure on NASCAR to keep the momentum rolling as teams and fans head to Phoenix, Las Vegas, Bristol and beyond.

In order to do that, NASCAR has a difficult job. The racing at the majority of tracks is simply not the same as it is in Daytona (see: not using that pesky restrictor plate), and for any fans who tuned in for the first time last week, it’s not going to have the same feel. Yes, teams will be gunning for the win with the new Chase rules, but it’s unlikely that we’ll see an ultra-close margin of victory each and every week.

So what NASCAR must do in conjunction with the media — in particular, FOX — is bring the fans storylines that are not just centered on what’s on track throughout the weekend, and back that up in the coverage on Sunday. For example, if fans were introduced to a driver through features early in the weekend, they might be compelled to follow him from that point on — and that means making sure he gets covered in the race broadcast, whether he’s racing for the lead or 15th place, or if he pulls into the garage with a mechanical problem. In other words, hook viewers with a compelling story, but don’t leave it at that. Let them see for themselves how the story unfolds.

In general, the emphasis on the sport needs to be centered on the personalities within its sphere. There was a time that race fans felt as though they knew their favorite drivers personally through the media, even including commercials. There was a bond, a connection between fans and their favorites that made viewers care about what was happening on the racetrack. It wasn’t just about who was running up front for the win or the title, it was about where fans’ favorites were running, and a little bit of the feeling that maybe, just maybe, they could pull one out.

Excitement in racing is a tricky thing. Yes, it comes on the track, but it also comes in the pits, the garage or a driver’s personal space. It comes from door-to-door action, but it also comes from an underdog putting his best moves on a big name — and sometimes beating him. It comes from racing for the lead, but also racing to be the best of the struggling smaller teams. It’s in the cars and the engines, but also in the people and their hearts. It’s everywhere, but it has to be a conveyor to fans every step of the way. If that is done successfully, fans might be more willing to watch a race where one guy is running away with the lead at the halfway point, because the focus isn’t only on that driver, but on the others to whom fans have been introduced.

In the days of social media, there’s real potential for fan involvement with the media during race weekend. Perhaps FOX should let fans vote on drivers outside the usual suspects they’d like to see featured in broadcasts, both before and during the races. Polls and games on social media could connect them to those drivers in a different way, perhaps starting with something as simple an “identify the baby picture” on Friday leading into features throughout the weekend. Fans could choose the types of features they wanted as well, perhaps voting on a shop tour, motorhome tour, crew feature, etc. The possibilities for getting people truly engaged through their drivers are endless and exciting.

Meanwhile, NASCAR needs to find a way to let the races unfold as naturally as possible, without influence. What does that mean? No phantom debris cautions, no matter who’s leading or how big that lead is. If it’s late in the race, throw a red flag if it’s warranted, rather than wasting laps under caution. Also, let drivers race unless they’re being overtly dirty or dangerous. That includes restrictor plate tracks, where the ridiculous drafting rules NASCAR crafted to stop tandem drafting led to inconsistent and unnecessary penalties (or lack thereof) in Daytona.

It also means using some common sense on some calls. By now, everyone has seen the other controversial call from Daytona, where Kasey Kahne was penalized for speeding on pit road after he clearly sped up to avoid being collected by a spinning Michael Annett. NASCAR’s rules have always allowed for drivers to speed on pit road to avoid trouble, either low on the track or at the pit road entrance. So while it was Kahne’s mistake in stopping, rather than running through the pits and making a second stop, NASCAR blew the call in the end. Sports fans want fairness in officiating, and if that exists on a consistent basis, they’ll even accept a call that goes against their team if they know the call would have been made no matter what.

It all sounds simple, and it is — giving fans fair officiating, unadulterated racing and a reason to cheer for a variety of drivers are all things that should be done, and it certainly wouldn’t be difficult to make sure they happen every week. But if fans want to keep the excitement in the sport as it heads to a variety of tracks, they need to understand the reality of racing. Not every finish is going to be decided by inches; some are decided by seconds, and that’s OK. It’s not ideal, but it’s part of the sport, the same way a 15-2 blowout sometimes happens in baseball. Fans of other sports understand the reality that not every game is going to be a nail-biter, and so do most race fans. Those who are expecting the margin of victory to be inches every week need to take a deep breath, sit back and watch the race unfold. There’s going to be action (if the networks show it); it just may not be for the lead.

Fans, too, should take the time to learn about different drivers and teams — it’s more rewarding to watch a sport where you can pull for more than one racer. Instead of shutting off the TV or leaving the stands if a favorite has a bad day, fans have an opportunity to either pull for someone else or to watch the rest of the action from an unbiased perspective, which can make it clear that something special is happening on the track, even when a certain driver isn’t a part of it.

Can the momentum from Daytona keep everyone excited as the long season rolls on? Yes, but it’s going to take work from NASCAR and the television media to perfect the way the fans see the final product. It’s also going to take an open mind from fans, and perhaps a bit of time spent discovering the sport’s rich history — how races have run in the past, as well as the stories behind the drivers out there today.

NASCAR racing is a special sport in that there are 43 teams involved each week — and it’s about every single one of them. It’s not just about the margin of victory or who done somebody wrong on track; it’s more than that. Fans deserve to be given every aspect of the sport, and once they have it, they have a responsibility to understand it as fully as they can.

At the core, it’s about people, from the teams to the fans. And people make it a great show.