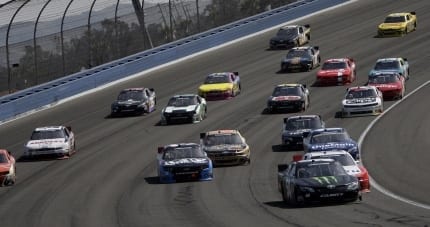 As the Nationwide Series gets into the heart of its regular season, there’s another big piece missing from its 2014 resume: a handful of regulars that ran up front and contended for last year’s title. Gone are reigning champion Austin Dillon, Sam Hornish, Jr. (banished to a limited schedule with Joe Gibbs Racing) and Parker Kligerman, among others. Car count has declined across the board, meaning one of the challenges within the next couple of weeks will be simply filling a 40-car field without adding jalopies from the junkyard.

However, as evidenced by Regan Smith’s thrilling victory during the season-opening race at Daytona, there’s still plenty of talent in NASCAR’s equivalent of “AAA” baseball. In fact, the championship is more wide open than ever, with no fewer than five drivers easily in position to take home the hardware. Here’s a quick look at who’s expected to flex their muscle, stealing Victory Lane from Cup Series invaders while racking up the points to contend for that elusive top spot in Nationwide points:

Regan Smith: Already one-for-one to start the season, Smith slew some demons by winning Daytona. It was the same track where, last season his No. 7 car was leading only to get turned off Turn 4 on the final lap. Carnage ensued, Kyle Larson’s car was destroyed and the resulting wreck sent over two dozen fans to the hospital with serious injuries.

Smith recovered from that, leading the standings for a chunk of spring and summer but mentally, it weighed on him for months. A charge by Hornish and Dillon in July and August wrestled that advantage away, and Smith was never able to gain the mental fortitude or on-track rhythm to take the championship back. A wreck with Elliott Sadler seemed to complicate things, leading to anger from that normally laid-back Joe Gibbs Racing personality. The end result was a slumping second half for Smith, with four top-5 finishes in 17 starts and just three events where he led more than one lap.

This year, however, presents a clean slate in which Smith has already started off on the right foot. The highest returning full-timer (he was third in the points) Smith has now been through the thick of a championship battle for the first time in his career. Remember, since debuting in NASCAR’s top 3 series in 2002 his best points finish in _any_ of them, prior to last season, was 20th. Top-tier equipment capable of contending on a regular basis is new to this driver, and that whole consistency thing became part of the learning curve.

Smith will have no such struggles this year, and with a strong rookie teammate in Chase Elliott, there’s an extra set of info to draw from. This team should be considered the title favorite looking ahead.

Elliott Sadler: Poor Sadler has to wonder what he has to do to get over the hump. Three full-time seasons in the Nationwide Series have produced no titles to date, Sadler the victim of wrong place, wrong time enough to start his own hard-luck reality show on TLC. Despite equipment from Joe Gibbs Racing, which typically runs circles around Nationwide competition with its Cup full-timers Sadler never seems to have the same level of speed and handling as his teammates. You even wonder if the JGR faithful believe in him wholeheartedly besides the sponsorship money he brings to the table; Sadler was passed over multiple times to sub for Denny Hamlin in the No. 11 Cup car, for example despite being an in-house driver with years of Cup Series experience.

That final shot at Cup glory is really what Sadler’s looking for; after all, JGR is one of the few major programs with an “opening” in the form of a possible fourth Cup team down the road. But to break through, Sadler needs to stop being the good soldier and start getting more aggressive on-track. Daytona was the perfect example; it seemed on the radio that he was attached to Kyle Busch like a puppy dog instead of forming a separate challenge for the win. If the No. 11 team races like it’s scrap metal compared to Busch and Co., well, they’ll finish a step or two behind. And chances are, that step or two behind will also allow some rivals to get out in front.

Sadler can stop all that smack talk with a win early, and I think he really needs it after getting shut out in 2013. If the No. 11 can get to Victory Lane, let’s start calling them contenders; we know the horsepower and equipment are better than anyone else in the series, hands down.

Trevor Bayne: After years of shuttling back and forth between a full-time, underfunded Nationwide ride and a limited Cup schedule 2014 is a make-or-break year for this youngster. Chances are with both Carl Edwards and Greg Biffle in contract years there will be an opening at the top level of Roush Fenway Racing. But Bayne needs to prove he belongs, after struggling mightily for most of last season en route to a disappointing sixth in the standings. A mid-season win at Iowa was nice, but just seven top-5 finishes was hardly the type of resume that showed owner Jack Roush Bayne could move up alongside good friend Ricky Stenhouse, Jr.

This year, Bayne does pick up better teammates in rookies Ryan Reed and Chris Buescher. Travis Pastrana, while having the best intentions last season, likely weighed RFR down a bit with multiple wrecks and spotty feedback. Buescher especially, armed with potential and the right amount of stock car seasoning, will only enhance a program that needs information sharing like the JGR superpower it’s chasing to truly contend. Bayne also has steady sponsorship, in the form of Advocare that beefs up the program financially.

Sadly, serving as a “wild card” here is that giant elephant in the room: multiple sclerosis. Bayne claims it will have no effect on his performance, and I believe him. But just like the blood clot situation for Brian Vickers, the sad reality is health problems are a risk that can pop up at any time here (although all of us at Frontstretch sincerely hope they don’t. Bayne, well-spoken and one of the nicest personalities in NASCAR, is the perfect spokesman and role model capable of helping the push to find a cure for M.S.)

Ty Dillon: Yes, Chase Elliott has more hype, but in terms of championship contention, Dillon is the rookie at this level armed with more experience. While never winning the Truck Series title, like older brother Austin, Richard Childress’ “other” grandson still accomplished plenty in that division. Three wins, four poles, and two top-4 points finishes is nothing to scoff at as Ty takes the full-time role vacated by Austin in the championship-winning No. 3. One important thing to note about Dillon is he tends to finish races, going 46-for-47 at the Truck level with the lone DNF due to engine failure. That’s important for a points system that stresses consistency and running on the lead lap.

Dillon’s biggest problem may be winning with a team that’s visited victory lane at just one track, Kentucky, the past two seasons with big brother at the controls. Horsepower and chassis-wise, RCR seems a step behind both rivals JGR _and_ RFR at the Nationwide level. But to finish first, you must first finish and Dillon’s ability to take care of equipment will at least propel this team into the conversation, especially if the veterans experience bad luck.

Brian Scott: The knock on Scott has always been he’s Paul Menard, Jr., moving up the ladder through the support of Daddy’s pocketbook. But you can’t race at this level for this long without the results to justify millions in sponsorship money. Quietly, the 25-year-old came into his own late last season, posting 13 top-15 results in the final 15 races including a dominating performance at Richmond after winning the pole. If not for a late caution flag, Scott would have earned his first victory; he still rode the late-season surge to seventh in series points.

There’s no question that, like Menard, Mr. Scott deserves a place on the grid. But Menard has never been a title contender in Cup; is Scott designated to “B-level” status as well? Running in the top 15 on a weekly basis is one thing; contending for wins every week is another step altogether. With eight top-5 finishes in 143 career starts, the jury’s still out on whether this step up in performance is temporary or permanent as Scott eyes the Sprint Cup level come 2015.