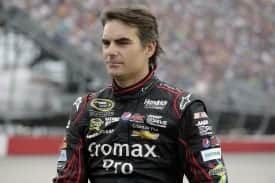 Jeff Gordon struggled for years at Phoenix, yet has been strong there since 2007.

Throughout The Profit on CNBC 500 race weekend, Kevin Harvick and his Stewart-Haas Racing team turned in a near flawless performance from the time they unloaded to the checkered flag. The Californian’s dominance, leading 224 of the 312-lap distance at Phoenix International Raceway, was not in question; however, how much is a result of his history at the track where he has accumulated recent remarkable success? Not as much as one may think.

In the fall of 1994, in a NASCAR Southwest Tour race at Phoenix, the 18 year-old Harvick made his first career start on a track one mile or larger. Thus, he has a leg up on the competition from that standpoint because many of his peers may not have even seen the Arizona desert until their first visit to the track in the Truck Series or Nationwide.

Harvick has shown muscle recently with three wins at the facility in the last fourNASCAR Sprint Cup Series races. Those results, however, belie that he had never won at Phoenix until a NASCAR Camping World Truck Series race in 2002 and was winless there at both the Nationwide and Cup level until 2006.

An additional example of a talented driver that took a while to break through for a victory at Phoenix is Jeff Gordon. Gordon was the driver to beat at almost every track as a teenager in the USAC open-wheel ranks, including the Copper World Classic at Phoenix in 1991. Despite his prior experience and success at the facility, he would not win again until a Nationwide race in 1999. It was one of the few tracks that eluded him from victory during his lengthy Cup career until 2007.

What makes Harvick’s victory more impressive is the adding the change the track has been through. In time for the Fall 2011 event, the track was repaved and reconfigured. The changed dogleg produced a new challenge for drivers that had learned the previous nuances of the unique oval.

There is no doubt that prior knowledge does not hurt an effort, and familiarity with a track’s atmosphere has proven to help over the long run. Harvick has some of the best overall statistics among Cup drivers in the last ten races at Phoenix, which should automatically put him in contention.

Starting this year, being in a position to contend becomes much different from being at the front. Having experience at a track and turning in a solid performance is not necessarily going to get the job done. A prime example will be at Phoenix in the fall, when the end result will lead into the four-driver winner-take-all Chase for the championship at the Homestead season finale.

Statistics always provide important insight due to the multitude of talented drivers, teams, and crews at the Cup level today. It leaves a small margin for error, which requires every team member to be well-rehearsed and on their game week in and week out. It is that entire package that becomes the game changer.

Harvick’s knowledge definitely played a part in claiming the victory. After all, at the end of the day, he is the one holding the wheel. At the level these drivers are at though, it takes an entire organization’s overall setup and attention to every little detail that contributes to putting together a winning effort like what was seen on Sunday afternoon. A driver with as much skill but less track experience could have wheeled that car to the win.

A weekend like Phoenix, where a team seems to hit on everything together, is what everyone strives for, and it will become more significant than ever as the season continues. A race like Harvick’s is the template for success in the new Cup tournament.