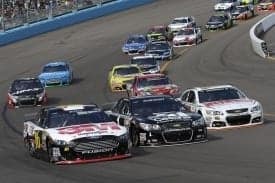 Phoenix, not quite the compelling follow-up to a dramatic Daytona 500.

NASCAR’s Sprint Cup Series swept into its West Coast swing this weekend with a sandstorm out in Arizona. Momentum, with one Most Popular Driver winning one Most Important Race, was clearly in their corner. All week, Dale Earnhardt, Jr. popped up everywhere from SportsCenter to Letterman, reminding former, current, and future supporters of stock car racing of the cool factor that can still be attached to this sport. Fans entered Phoenix Raceway in droves, looking to quench their thirst for excitement with a finish that could be just as thrilling as the one they saw on television last Sunday.

Leave it to NASCAR to fight thirst with a trip towards a desert. Yes, Kevin Harvickwas part of the snoozer problem as his No. 4 car was so dominant he could have won with a parachute and 20-ton anvil attached. Winner of three of the last four Cup races at this one-mile oval, Harvick was two-tenths faster than the rest of the field from the first practice Friday right on through the checkered flag. Restarts, fuel concerns, even a caution in the middle of green-flag pit stops did nothing to keep the Jimmy John’s Chevy from racing within its own time zone.

But the problems for NASCAR out in Phoenix ran deeper than just one dominant car. On Friday, drivers went out of their way saying that the first “unrestricted” event for the sport’s 2014 rule package would “not be indicative of the racing going forward.” It was a mysterious, politically correct statement made across the board, whether driving Ford, Chevy, Toyota, or your favorite driver’s souvenir hauler. What in the world did they mean? That hardly sounded like an endorsement.

Well, reading between the lines, in hindsight no one wanted to hurt our feelings with the truth.

“This race, Sunday I think is going to suck. But please bear with us, because the rest of the races won’t! Really!”

In this case, I think the drivers are right; Phoenix will be an exception to the rule. The reason being is that a repave job done two years ago still hasn’t been matched with a tire from Goodyear that will wear out. Harvick, with a perfect-handling car could have probably used the same left-side tires for all 312 laps and been just fine. Why even bring an extra inventory to the racetrack? It’s a problem that limited the advantage of fresh rubber, kept drivers running equal speeds, and took an element of driver skill out of the equation.

It also kept the fastest drivers Friday, well, the fastest ones on Sunday. Seven of the day’s top 11 starters finished within the top 11 spots; only Kurt Busch, with a blown engine wound up outside the top 20 from that group. For those who started mid-pack, working towards the front was tantamount to an optical illusion. Jumping 20 spots in five laps, a move through the pack that happened with ease at Daytona? Fast cars would be lucky to jump five, six, seven spots over the course of a green-flag run.

“We had a great race,” said defending winner Carl Edwards, who spent virtually the whole event trying to gain fifteen spots in the running order. “We just needed to qualify better. We had a fast race car all day but it takes so long to pass people.”

I’d understand those comments if Edwards qualified 35th. But he started 23rd! And moved Heaven and Earth, it seemed from radio transmissions, just to finish eighth. Taking three hours to jet by, in essence fifteen lead-lap cars may be challenging from a chess match standpoint, but there’s a reason chess games don’t attract a crowd of over 100,000 some weekends.

“It’s really hard to pass here,” added Jamie McMurray, the 10th-place finisher, before adding how fun the track was from a driver’s standpoint. After all, this race was the same one a year ago where Denny Hamlin got fined $25,000, by NASCAR CEO Brian France for critical comments about the racing. No one wants to get in hot water all over again.

But you also can’t evade the truth. Cars going equal speeds, on a repaved racetrack with a long-lasting tire leads to a race where everyone runs in place. The fast cars run up front, no one can quite challenge them and it’s so hard to gain a tenth of a second on someone, per lap that passing becomes an impossible affair. And for new fans of the sport, subjected to about 50 passes a lap at Daytona getting one about every five minutes on TV just isn’t going to cut it. I’m not saying Phoenix had to be like a plate race. But what it needed to be was something more than cars needing fuel strategy or timely cautions to somehow work their way through the field.

This problem is nothing new for Phoenix, which has had three races with 14 lead changes or less since the repave. It’s no coincidence that after a Daytona Speedweeks that never gave us one debris caution, the yellow flag held back for even Kurt Busch’s spin off Turn 4, that three of the six yellows Sunday were for debris we never saw. That type of mystery only comes out when NASCAR knows the race is getting out of hand; and by getting out of hand, I mean fans falling asleep on the couch. To their credit, at least they waited until halfway this weekend to cave in but once they did, those yellows seemed to be the only thing keeping the race cars running side-by-side. Instead of addressing the real problem, in between races – how can we repave a racetrack that needs it without ruining the racing – manipulation seems to be the “fix-it” method of choice.

BOWLES AT ATHLON SPORTS: Through The Gears — Four Things We Can Take Away From Phoenix

It’s a shame, because Earnhardt winning, the new rule changes and even Harvick’s triumph Sunday has led to some enthusiasm 2014 will be better than expected. There’s a garage full of good stories, with good tracks ahead in Bristol, Martinsville, even Fontana (yes, Fontana!) to spice things up. The last thing NASCAR needed was a full break to its momentum.

Instead, one can only hope this Sunday’s race was a bit of an aberration. But next time, maybe someone should consider actually fixing this desert mirage instead of pretending the racing here is still golly gosh perfect. It’s been two years now; we can’t afford to wait five more, until the asphalt ages for real racing to return to Phoenix.