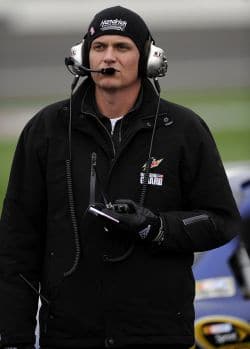 Steve Letarte, with his No. 88 car all but locked into the Chase will have no problem taking risks on strategy this season.

No, I’m not talking about Las Vegas. It’s clear the new Chase format, rewarding race winners, is going to have a significant impact on the pre-playoff portion this season. We saw it take effect already this past Sunday, when Dale Earnhardt, Jr.’s team was comfortable with making, had they needed to, a fuel gamble to go for a second straight victory. Crew chief Steve Letarte pulled no punches on the radio, telling Junior, “We’re here to try to win” and the driver was more than willing to jump on board.

“The gamble was not as nerve-racking and not as a big a gamble for us considering the circumstances,” he said post-race. “The new system definitely allowed us to be more carefree about that and not have to really think it over.”

He also won’t be alone. Now, Kevin Harvick will be in the same boat, having picked up a maiden win in Stewart-Haas Racing colors, an added bonus he’s already excited about.

“It [The win] allows (crew chief Rodney Childers) to stretch fuel windows and do a few things,” said the wheelman of the No. 4 Chevy. “For the guys in the shop, it allows them to really broaden their horizon on thought processes. You can really get aggressive on everything.”

What this format also means is that for drivers who are struggling, one win can completely change the complexion of a season. You can essentially suck for 25 races, win at Richmond in the cutoff race and you’ll likely be in the Chase. So for someone like Kurt Busch, who has endured a rough couple weeks, there’s plenty of hope and no concern about digging out of a big, early hole. This dynamic will significantly change the regular season and it should translate into fun viewing for the fans.

I, for one am fascinated to see this play out.

In the past seven years as a NASCARcolumnist, I’ve never hidden my dislike for the bombastic, shouty, self-indulgent THISIS FOX SPORTS approach to covering NASCAR. For some reason this year, however,FOX broadcasts are not annoying me quite so intensely. Perhaps it’s a product of my rapidly increasing age or my recent move to the West Coast but, like I say, I’m finding myself shouting at the TV much less.

Three things I do want to comment on, though. First up, it’s the old what to do with Jeff Hammond issue: something of a common theme these past few years. The goal seems to be to put him in the most out of the way or irritating place possible. At Phoenix, they had him broadcasting from the corner, right outside the track and they would cut to him right at the moment when a full pack of cars was driving past, rendering much of what he said obsolete and inaudible. Maybe that’s the plan all along: cunning, Fox, cunning. Then, there’s the new running order split into groups of anywhere from six to twelve drivers at a time. As many have already commented on,I have to say, I agree with them; it’s a bit of a disaster. Not only is the FOX Box less useful, it also takes up more space. What was wrong with the last version? Nothing, in my opinion. This adjustment is just another case of change for change’s sake. And finally, there’s old DW. Is it me or does he love his boy June Bug even more this year? Talk about a lack of journalistic objectivity. On Sunday, we had to listen to him tell us Junior had something for Harvick in the last 50 laps, time and again, when it was clear to any fan who’s watched a lap of NASCAR the only person beating Kevin Harvick on Sunday was Kevin Harvick himself.

This weekend, we’ll head to the first mile-and-a-half track of the season in Las Vegas Motor Speedway. Now, while it’s fair to say a bad performance here won’t define how you’ll race on the other cookie-cutter tracks, it’s certainly a good indicator as to how you might fare across the balance of a long season. In 2006 and ’07, Jimmie Johnson won the race en route to his first and second championships while in 2008, Carl Edwards won and finished up second in the overall standings. 2009 was something of an aberration, as Kyle Busch’s race victory in his hometown only translated to a 13th-place finish in the final run-in. Normal service was resumed in 2010, though when Jimmie Johnson won again, a year in which he captured his fifth straight title. In 2011, Carl Edwards took the checkers and finished an agonizing second to Tony Stewart, who then won the 2012 race before finishing ninth overall. Finally, last year Matt Kenseth picked up the trophy and as you know he ended up second, falling just short to J.J.‘s Quest For Six.

So, while it’s not necessarily a precursor to a final, overall result, a win at Las Vegas certainly sets you up well – this season perhaps more than any other as it comes with the added bonus of a guaranteed Chase spot.

FOUR: Roush Hopes To Rev Up At Vegas

It is very early days in this nascent 2014 season, but the three musketeers of Roush Fenway Racing are yet to pick up a top-5 result on the year. Greg Biffle has finished eighth (at Daytona) and 17th (at Phoenix), respectively. Carl Edwards mirrored the Biff’s results, finishing 17th and eighth while second-year driver and the sport’s most famous other half, Ricky Stenhouse, Jr. has results of seventh and 18th. While these numbers are far from disastrous, you can be sure Jack Roush and team will be looking for much more this weekend at a track they typically run well at. Edwards, in particular, raced hard all day Sunday with Michael Waltrip picking him as a potential winner, mid-race on FOX, but he couldn’t advance higher than eighth.

“We had a great race. We just needed to qualify better.” said Phoenix’s 2013 Spring winner. “We had a fast race car all day, but it takes so long to pass people. I really love this place. The track is aging and getting better and it makes it fun. I had a good time, just wish we could have had a better finish.”

Like I say, there’s plenty of racing still to come but Roush’s “B” level performance might be worth keeping an eye on. RFR has seven victories in Vegas, more than any other team so Sunday would be a great time to start a turnaround.

And finally this week, I want to take a moment to mention a very good friend of mine who will, for the purposes of this column, remain nameless. This friend is a huge and lifelong NASCAR fan – his favorite driver being Dale Earnhardt – a man who genuinely and wholeheartedly cared about this great sport. Over the years, we’ve watched countless races together and spent many a happy hour talking racing. He’s even commented on my columns, usually with the express intent of winding me up and stirring up trouble. Well, this year with all the changes in format he’s completely lost interest. He said to me (and I quote) “NASCARis dead, Dan.” He did watch the 500, but texted to say he had no interest at all in yesterday’s race.

Now, this person is just one fan but I can’t believe he’s the only one who feels this way. I hope he’s in a very small minority, but it worries me greatly that he’s not. Sadly, the TV ratings so far have mirrored those fears, with a 4.8 overnight the lowest for Phoenix since FOX took over coverage in 2001.

Is doomsday for NASCAR imminent? No. But its popularity, early in the season is a story to watch, for sure.