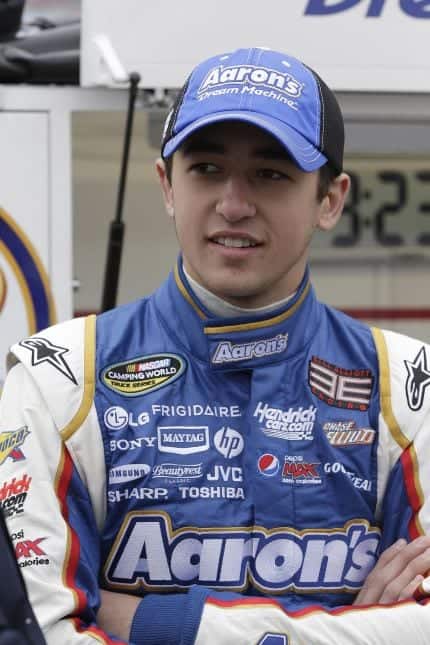 Chase Elliott is one of the Nationwide Series young guns who could be unafraid to put the bumper to a Cup driver at Bristol this weekend.

If there was ever a doubt that Chase Elliott was a wheelman, he put it to rest Friday night at that tough old track in Darlington, South Carolina. Elliott charged past Elliott Sadler on the last lap of the VFW Sports Clips Help a Hero 200 to make it back-to-back Nationwide Series wins.

A caution with five laps to go because of an incident between Kyle Larson and Tanner Berryhill sent the leaders to pit road for the final time and gave Elliott the break that he needed. As the laps wound down, after a furious battle with Larson for second, Elliott had nothing left to catch Kyle Busch. On the ensuing pit stops Elliott Sadler and Kyle Larson emerged from pit road the leaders, but the 18-year-old Georgia native charged from sixth on a restart with two laps to go to become the youngest winner in Darlington history. Sadler held onto a loose No. 11 car to finish second with teammate Matt Kenseth coming home third.

The win capped off a dominant day for both Kyle Busch and Chase Elliott. Busch started on pole and led the most laps (84). The Monster Energy Toyota appeared headed to his second win of the season and second straight at Darlington before that ill-time final caution. He faded to finish fourth. Regardless, Busch was clearly matched Friday night by Elliott, who started second and led 52 laps. The two were the class of the field in a race that saw 13 lead changes amongst six drivers.

Joey Logano rounded out the top five while Kyle Larson, Kevin Harvick, Regan Smith, Trevor Bayne and Ty Dillon composed the rest of the top-10. Elliott’s win helped him retain the point lead he entered Darlington with, now at 13 markers ahead of teammate Regan Smith.

Well, how many different ways can we say that Chase Elliott is a star? The youngster now has two wins in seven races of his Nationwide career and leads the point standings … as a rookie. Two tracks that he had never seen before he went out and not only conquered but dominated. The JR Motorsports newbie has brought the organization new life for 2014 as they chase a championship. And as he continues to prove he’s Cup bound before too long.

In keeping with the JRM trend, Regan Smith shouldn’t be forgotten as his young teammate grabs the headlines. Smith had a top-10 car on Friday but spun on lap 89. The crew brought him down pit road and served the penalty of pitting early, yet in doing so was able to keep the keep the tires from damaging the car.

Smith remained on the lead lap and rebounded for an eighth place finish. He remains second in points and with a win himself. He too will be an early 2014 championship favorite, hoping to learn from tough lessons of losing the title during the summer months of 2013.

It was a tough night to be a Buescher. The rough season for James continued in Darlington as the No. 99 team pounded the wall on lap 75 and effectively ended their night. The RAB Racing team has had a rough start to the year after leaving Daytona with a penalty while running in the top five. Buescher has yet to capture a top-10 this season with Darlington, 25th, being their worst finish of the year.

James’ rookie cousin Chris didn’t have it any easier with the Lady in Black. Chris had a solid top-10 car but had a potential finish there taken from him. While racing with fellow rookie Dylan Kwasniewski, Buescher was sent up into the outside wall. While coming back down to the inside of the track, Kwasniewski finished the job and sent Buescher into the wall again. The damage was severe enough to send the No. 60 Roush team to the garage and Buescher eventually finished 34th.

The Chris Buescher – Dylan Kwasniewski incident was one that could have been avoided and, depending on what side you stand, could have looked intentional. The two rookies were racing hard around each other when the accident happened on lap 69. Buescher had been racing his teammate Trevor Bayne hard when he had to get out of the gas. That’s when Kwasniewski came along and got into him and sent him up the hill into the wall.

Yet it wasn’t over. As the two came back down to the inside of the racetrack Kwasniewski drove over Buescher and sent him to the wall again, this time ending his night as Buescher needed large scale repairs in the garage in order to put his car put back together. On the other hand, Kwasniewski emerged unscathed and, after taking the blame, ended the night with 23rd place finish.

Underdog Performer of the Race: The JD Motorsports team of Landon Cassill had a great run on Friday night that nearly netted them their first top-10 finish of the season. Cassill in his No. 01 jdmotorsports.com Chevrolet ran a solid top 20 all night and stayed on the lead lap for the entire 147-lap event. At one point, lap 85, he was running 10th in the underfunded machine around the likes of Ty Dillon and Brendan Gaughan in Richard Childress Racing cars.

Cassill’s 12th place finish tied his best finish of the season, also a 12th at Bristol. It moves him to 13th in the driver standings.

Double-Duty and Start and Park Effect

Get used to saying the name Chase Elliott. The highly touted and talented rookie has arrived and is making good on all the talk surrounding him. Friday night, he refused to lose and charged late to make a memorable moment at Darlington in a last lap pass for the win. Elliott now sets himself apart from the rest of the Nationwide regulars as one of two drivers to have a victory and matches Kyle Busch’s two wins as the most thus far in the season.

Behind him the action was intense with other stars like Kyle Larson and Trevor Bayne making runs at good finishes. Elliott and Larson put on a great show for second at one point while Kyle Busch ran out to a comfortable lead. And then there was Elliott Sadler, going for it on the last pit stop with a call for two tires from crew chief Chris Gayle as the team looked for their first win since 2012.

The 1 hour and 45 minute race is one of the shortest on the schedule but didn’t fail to entertain. Rookies learned hard lessons at the track Too Tough to Tame and the championship picture began to take a little bit more shape.

Yet this night, like so many that is yet to come, was Chase Elliott’s. The youngster proving once again that he’s a chip off the old block, winning at the same track his father did for the last time in 1994. Oh, and he also kept a Cup driver out of victory lane again which will make everyone happy.