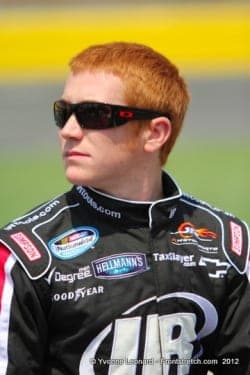 Cole Whitt, in his rookie year driving for Swan Racing could face the unemployment line this week if the team shuts down.

Is Swan Racing writing their Swan Song as we speak? That’s been the story during a slow NASCAR off week, the two-car team leaning more towards extinction with each tip. News broke Thursday in the form of an official statement, the upstart, two-car Cup Series organization claiming they were “evaluating their program” in the midst of financial troubles. The Richmond entry list, released Monday may initially have their Nos. 26 and 30 listed but who knows whether they’ll actually show up at the track to race. Based on the buzz, the next time you might see those numbers they will be sitting on an auction block instead of the starting grid.

Cole Whitt, in his rookie year driving for Swan Racing could face the unemployment line this week if the team shuts down.

It’s a big surprise, disrupting NASCAR’s upbeat start to 2014 (TV Ratings notwithstanding) that have seen some underdogs keep pace. For Swan, though, just like any failing business, their track of mounting debt didn’t happen overnight. Sources at Darlington claimed that oneNASCAR vendor tried to keep them from hitting the track after the team came up nearly half-a-million short on a payment. Young entrepreneur Brandon Davis, who bought the former David Stremme outfit with much fanfare less than two years ago, has now gone conspicuously silent, both to the bill collectors and the broader spectrum of social media. Former NFL player Bill Romanowski, along with rapper 50 Cent, who have both supported the team in various ways have seemingly turned their focus towards other, more profitable ventures.

It’s a shame, should extinction end this experiment, considering this team was made up of the types of future leadersNASCAR needs in its arsenal. Davis and co-owner Anthony Marlowe, in their mid-30s were innovative minds in a garage where the big shots are twice their age. Understanding the difficulty of rising up the ladder, they completed a five-year plan for growth and paired up with two rookie drivers, Cole Whitt and Parker Kligerman, who have showcased potential in NASCAR’s Nationwide and Truck divisions. In a sport desperate for new money, along with new ideas, partnerships with outside celebrities were designed to get new faces in new places. Its goal was to connect this sport with the 18-to-34 generation that it’s teetered on the brink of losing.

But the best laid plans can’t keep anyone’s attention when they sit all rolled up in a corner. FOX, this season probably showed more of an actual Swan on TV than those two race cars… and for good reason. Despite Kligerman’s warm personality, the few times he surfaced were for a number of mechanical goofs and wrecks that left the No. 30 car without a top-25 result. Whitt has done slightly better, with an 18th at Fontana in March, but an average finish of 30.9 won’t get the job done for potential sponsors. At Martinsville just a few weeks later, tension was high following an early wreck for Kligerman and it was clear, in the heat of radio transmissions lamenting another busted-up Toyota that a crisis was imminent.

Why? Well the team is self-funded, for one and it’s not exactly your child’s “piggy bank” type of cash. We’re talking seven figures, easy, in a current system where the four-car teams spend nine figures over a course of a season combined in order to compete. “I’m spending a lot of money – a lot more than I’d planned on, but I’m having so much fun, I don’t care,” admitted Davis last August in an interview withUSA Today’s Nate Ryan. “When it gets to the point that impacts my business, it’ll change things.”

Clearly that’s come to pass, as self-funding turned sour all too quickly, and reminds everyone of NASCAR’s Country Club class system. Despite the increased competition, where we’ve seen 26 drivers score a top-10 finish this season, a wide gap remains between the “haves” and the “have nots” sitting on the back of the grid. While the new Chase format has encouraged them to race – most events haven’t seen a single start-and-parker for the first time since 2008 – it’s also driving them deeper into debt. Throwing the kitchen sink at these cars, in hopes they’ll pull out a miracle victory somewhere, has simply highlighted just how wide the chasm has become. Running 27th each week with little hope of anything getting better doesn’t get you on television, give you extra cash to compete with NASCAR’s top tier, or even provide the confidence within your crew to push harder.

Swan could be saved, of course, if Toyota stepped up and funded an extra program. Right now, they’re only dipping their toe in with Joe Gibbs Racing and Michael Waltrip’s two-car operation: the ten Camrys, total, which ran at Darlington were the least of any manufacturer. (Should Swan go for good, that number drops to eight). Prospects look bleak, at least in the short-term even if BK Racing absorbs the No. 26 car currently run by Whitt. On paper, there’s no reason to do so; why put your eggs in another basket, spending millions to save a program when the two you have seem a step behind Hendrick early on in 2014?

But Swan’s demise, in the midst of millions, also speaks to just how much the rich are deeply entrenched. The smaller organizations that are succeeding, like Germain Racing, JTG-Daugherty, and even Chip Ganassi, have special chassis and engine agreements with superpowers like Hendrick and Richard Childress Racing. The “A” teams give to the “B” teams, ensuring their survival but also making it difficult for them to ever rise up and compete. Think about this one for a second: if the Yankees were giving the Royals executives, players, and coaches as a smaller-market organization, do you really think they’d give their best to someone else?

So now what we have in NASCAR to fill that 43-car grid is two options for the lower class. You’ve either got teams who don’t bite the hand that feeds them, using it in order to survive while hoping for the best. And in that scenario, while there’s an occasional breakthrough, (see: Stewart-Haas Racing and Tony Stewart in 2011) engine/chassis providers like Hendrick, who race themselves, remain assured of their place at the top. It’s a hierarchy impossible to break, their operations in the hundreds of millions, doling out the equipment to “B-level” programs while hoarding far too much money to ever be outpaced in terms of technology.

Option two, of course is to go all out and try and be that David who comes along and beats Goliath. Well, you want to try and beat them, at their own game? See Swan and their five-year plan. I spent some time with Kligerman, who brought money of his own down in Daytona for the 500. His energy was infectious, part of a young group of people who had the right idea as part of an important next generation to moveNASCAR forward.

Now, they’re five feet under, sinking daily as the red ink mounts. NASCAR’s Yankees-level programs, in the midst of another bankruptcy sit pretty at the top once again; the Swan who challenged them proved successfully you can’t run against them every week, on a wing and a prayer and hope to survive.

The rich ones, hoarding their trophies and money just need to hope, one day they’re not the only ones left still standing. And for NASCAR, with the gap still widening the question becomes whether Swan’s demise will be the start of a mid-Spring, mid-Summer epidemic of early foreclosures.