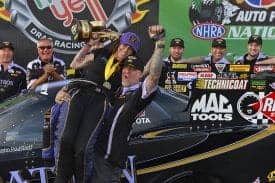 Alexis DeJoria, pictured here with Jesse James in Phoenix, is just one of 14 female drivers with wins in NHRA competition. Photo by Gary Nastase.

Alexis DeJoria has started out the 2014 NHRA Funny Car season with two wins and made it to the final round at the series’ most recent event, the 4 Wide Nationals at zMAX Dragway in Charlotte. The driver of the Patron Tequila Funny Car for Kalitta Motorsports is one of several female drivers making top runs and winning races right now in NHRA competition. Will she step it up another level, coming home with the series championship this season in one of the sport’s more competitive divisions?

Toni Montgomery had a chance to talk with DeJoria at Charlotte about her recent success. The female driver also touches on the unique 4 Wide format, getting that first win, women in motorsports, and the criticism some drivers face for having financial backing from family.

Look for more interviews coming up, later this week with NHRA drivers Brittany Force and Tony “The Sarge” Schumacher.

Alexis DeJoria, pictured here with Jesse James in Phoenix, is just one of 14 female drivers with wins inNHRA competition. Photo by Gary Nastase.

Toni Montgomery: 4 Wides are the big discussion this week. Can you tell me about the focus that it takes as opposed to a regular two-wide event to have four people up there?

Alexis DeJoria: It’s the only one of its kind on the circuit. You’re not only racing one other team, you’re racing three other teams when you go up there. It’s exciting. Bruton Smith’s always done a really good job with building the facilities that he has and it’s fun. Definitely, the fans like it, but crew chiefs sometimes it throws them a curveball. It’s definitely an exciting thing to be a part of.

Montgomery: As a driver, when you get up there do you find you have to focus more on racing the racetrack? Or are the other three competitors a distraction to you?

DeJoria: No, not at all. I think if anything, what puts us slightly off our game are those staging rituals. Getting up there and making sure you know which light to look at because there’s three other lights going up there. Before you can stage, you have to make sure all those top lights are lit and sometimes, it can be a little confusing. If you don’t know what lane you are in sometimes, it can get confusing too. But it’s been an exciting year for us overall and I think it’s just another one of those races and you just have to treat it like everyone else.

Montgomery: Speaking of an exciting year, you have two wins so far. They always say in any kind of motorsports that first win is the hardest one. Do you agree?

DeJoria: It definitely was. It was a huge weight lifted off our shoulders with that one and it seemed to get a lot easier after that! The second one came pretty quickly!

Montgomery: Let’s talk about women in drag racing. Do you ever feel the pressure that you have to work a little harder than other drivers to prove yourself because you are a woman?

DeJoria: I think when anything goes wrong, they automatically want to blame it on the fact that we’re female. We definitely get more focus put on us for not always the best reasons unfortunately. But I think just being the person that I am, I’ve always put a lot of pressure on myself to do the very best, to break away from any labels put on me and just be a good driver at the end of the day. Not a good female driver, just a good driver.

Montgomery: One thing about NHRA that stands out to me, coming from NASCAR, is there are so many more successful females here. NASCAR doesn’t have a touring series win by a female. IndyCar has one. There are 98 in NHRA. Any thoughts on why women have been so much more successful here?

DeJoria: I think because there’s more women that are competing. That’s the only thing that really sets us apart. NASCAR and IndyCar… IndyCar’s a little bit better butNASCAR is still really a guys’ race. I mean, there’s Danica. I think maybe there’s one other girl that might compete randomly but not on a consistent level like she does, so I think that’s just the difference. If there were more females, you’d see more female racers for sure.

Montgomery: Do you think that’s just a comfort level here, more team owners maybe willing to have female racers in their cars?

DeJoria: I think what the others were lacking were people like Shirley Muldowney who really busted the doors open and won and won championships. She’s the one that really paved the way for all us females and gave us the most amazing platform to compete on.

Montgomery: Do you think that NHRA is just a more accessible form of motorsports, not just for females, but for anyone?

DeJoria: I think it’s unique in the fact that every ticket is a pit pass and you have that one-on-one contact with your fans, and the drivers and crew chiefs, you can see them tearing the car down. That’s unlike any other form of motorsports.

DeJoria: I think so. But at the same time, it’s the most intense form of racing too, so it’s a nice balance.

Montgomery: In NASCAR, there are a few drivers who have financial or other backing from family, like the Dillons, grandsons of Richard Childress, and Paul Menard whose father owns the Menards stores. You have the same thing with your father (DeJoria’s father, John Paul DeJoria, is the founder of the Paul Mitchell hair products line and also the Patron Tequila brand). Do you also feel like that may also be another reason you had to work a little harder to prove that you belong?

DeJoria: For me, yes, definitely. Getting those stereotypes of “she’s just there because of that,” yeah, I’ve felt like I’ve had to work a bit harder, but not to prove anything really to anyone else, just to myself. At the same time, I would still be out here no matter what, if I got my father’s backing or not. I’m still sponsored by Toyota which is not owned by my father, Mac Tools, Redline Oil, and I’m on Connie Kalitta’s team so I’m actually racing for Connie. But yes, I do have the support of my family as well.

Montgomery: You really worked your way up through the ranks. Is that something that people don’t realize about you?

DeJoria: Sometimes. If they do their research, they’ll see pretty quickly because I was working my way up from slower to faster classes and I was pretty successful actually. I have a win in every class I ever competed in. It took some time just because it was what I wanted to do. I didn’t have any family that raced professionally so I had no history. I wanted to learn the ropes the right way.

Montgomery: How did you get into drag racing in the first place?

DeJoria: 16 years old, I went to a drag race and I fell in love with the cars. I wanted to race a Nitro Funny Car. That had been my goal forever, from the very beginning when I started in the Super Gas class and worked my way up toward this, knowing that this was the most difficult car to drive in all of drag racing. I wanted to definitely get my bearings and learn the best way possible.

Montgomery: When it comes to fans, do you find yourself as a role model for other girls who may have come to the track and thought it was fascinating? Do you see that you have a lot of girls coming up to the ropes and talking to you?

DeJoria: Yes, definitely. I hate to consider myself to be a role model because I’m not perfect. No one’s perfect. We all make mistakes, but I think if I can at least show young girls or young kids growing up that there’s other options out there, especially for young females, and showing them a strong female in a sport like this I think that’s a really great thing and if I can do that, at the end of the day then I did my job.