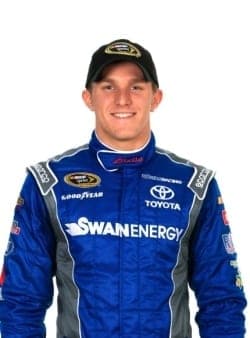 Parker Kligerman and teammate Cole Whitt could face an uncertain future if Swan Racing is unable to secure funding for the remainder of the season.

Did you miss an event during this busy week in racing? How about a late-night press release, an important sponsorship rumor, or a juicy piece of news? If you did, you’ve come to the right place! Each week, The Frontstretch will break down the racing, series by series, to bring you the biggest stories that you need to watch going forward for the week ahead. Let our experts help you get up to speed, no matter what series you might have missed, all in this edition of Pace Laps!

Parker Kligerman and teammate Cole Whitt could face an uncertain future if Swan Racing is unable to secure funding for the remainder of the season.

Sprint Cup Series: Swan Racing’s Questionable Future – A rather quiet week for the Sprint Cup Series as it bypassed racing altogether. That leaves one of the stories circulating how Brad Keselowski felt after Rick Hendrick signed Mark Martin to the No. 5 car instead of locking up the young driver in 2009. While the interview is interesting, it’s not earth-shaking, as anyone would feel a little frustrated, if not despondent, after losing out on a job. But the fact that it is a story at all shows how slow the week has been.

The story that deserves more attention is the one of Swan Racing having funding / sponsorship issues and scuttling part of its operations. The lack of attention that is paid to NASCAR signing associate sponsors rather than helping other teams get them is part of this equation. The issue also gives a nod and a wink to the idea that 43 cars are necessary at each race, which is something that deserves more attention. As for Swan, they’re still determining what to do. – Huston Ladner

NHRA: The Quest for 100 Wins – The engines are quiet this week but when NHRAdrag racing resumes next weekend in Houston, the quest will be on once again to reach the magic number of 100. That would be 100 Pro wins (Top Fuel, Funny Car, Pro Stock and Pro Stock Motorcycle) by female competitors.

Alexis DeJoria and Erica Enders-Stevens, who is third on the all-time victory list with seven, took home the 97th and 98th wins in Las Vegas earlier this season and will be among the competitors, along with sisters Courtney and Brittany Force, who will be trying to bring home that landmark 100th win. Brittany Force is also looking for her first victory to join this growing crop of female talent.

Alexis DeJoria and Brittany Force also took some time to sit down with Frontstretch reporter Toni Montgomery recently at zMAX Dragway in Charlotte. See their interviews this week in our Beyond the Cockpit feature for their thoughts on getting that landmark 100th win. – Toni Montgomery

MONTGOMERY: Beyond the Cockpit: Alexis DeJoria On The 300 mph Women of theNHRA

Formula One: Mercedes Continues Its Dominance – Mercedes proved again that they are the dominant car in Formula One with another strong showing at the Chinese Grand Prix in Shanghai. Lewis Hamilton started from P1 and never felt any pressure, while Nico Rosberg, his teammate, started further back and still drove up to finish second. Their display put Hamilton, with three straight wins, in control of the point standings, while also securing them important constructor’s points.

The closest competitors were Red Bull, with Daniel Riccardo’s fourth-place finish, and Ferrari, with Fernando Alonso taking third – the first podium result of the year for the venerable team. With that being noted, their teammates, Sebastian Vettel and Kimi Raikkonen, respectively, seem like they’re having problems adjusting to the new cars for this year. After only three races, these two organizations need to make some adjustments if there will be any fight for the championship other than between the two Mercedes wheelmen. – Huston Ladner

Short Track Racing: MAVTV to Televise SPEED SPORT Challenge – The folks atMAVTV and SPEED SPORT TV took another step this week in bringing local Short Track racing to the national spotlight with the announcement of the SPEED SPORTChallenge at Millbridge Speedway, to be shown on tape delay on MAVTV. The networks had already announced that they were doing a four-part series on the little track outside of Salisbury, NC to start their new endeavor with the SPEED SPORTMagazine show. This new effort is going to bring Mini Outlaw Sprint Kart racing to people who have never seen it before.

In the interests of transparency, I am the announcer at the track. The Mini Outlaws have been around for years and have a large participation in California and on the West Coast. They have begun to get a foothold in the East for the last seven years and have had a home at Millbridge for the last four. The ⅙-mile track has been transformed into a premier facility that showcases the best in Mini Outlaw racing in the backyard of NASCAR. Many members of the NASCAR community race at the track thanks to the schedule taking place on Wednesday nights.

This new announcement has already generated a buzz in the Mini Outlaw Community. Drivers from across the country are already committing to run in the event, including those from California and Texas. There are other drivers who are mulling over the idea as well. As more and more drivers commit, realizing they can give extra exposure to their careers and their sponsors, more attention will come to the race.

So for fans who have never seen a Mini Outlaw event, they are in for a treat on June 12th when the SPEED SPORT Challenge airs on MAVTV. If you don’t have the channel currently, make sure you reach out to your provider; you don’t want to miss this one.– Mike Neff

TUDOR United SportsCar Championship: Muscle Milk Pickett Racing Officially Done for 2014 – Remember three weeks ago here in the Pace Laps column when we reported about Muscle Milk Pickett Racing taking Long Beach and Laguna Seca off? At that time, the goal was to take some time and improve on their ORECA 03-Nissan. However, at the same time, team owner Greg Pickett’s explanation for skipping the West Coast races veered into a rant about Balance of Performance and how his team (and anyone else racing P2’s) would never have a chance to win.

It wouldn’t have been out of line to say that Pickett was setting himself up for some kind of exit. That exit officially came on Wednesday. Racer.com’s Marshall Pruett reported that the team had withdrawn from the TUDOR United SportsCar Championship. Muscle Milk Pickett Racing confirmed that the news was true on Thursday in a statement on their website and Twitter feed.

“The news published by RACER.com on Wednesday, April 16 is true,” the team wrote. “We have withdrawn from the TUDOR United SportsCar Championship, [and] there will be no further comments on the matter. We hope to be back racing at some point. We want to thank our fans for all their support throughout the years, it’s been tons of fun and hopefully we can have more fun in the future.”

As you can tell, Muscle Milk Pickett Racing did not give a reason for dropping out of the series and won’t tell you specifics as to why. It’s just another blow for TUSC, which has struggled at times this season. Pruett has also reported that there have been layoffs with the team as a result of their move, but that both of their full-time drivers (Klaus Graf and Lucas Luhr) will remain under contract. – Phil Allaway