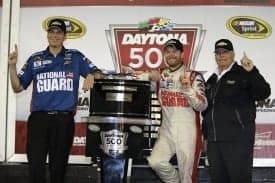 Dale Earnhardt, Jr.‘s win started the season with a bang. But will interest remain throughout the year?

Key Moment – The key moment of the 2014 season came during the Media Tour in Charlotte, when Brian France came to the podium and announced more changes to the Chase. NASCAR’s tried in vain, for years to emphasize winning, and it never came to fruition… until that very speech. The adjustments announced that cold day in January, ever since have seemed to heat up both the fans and the teams. The “win and you’re in” mantra was heard loud and clear by each side, leading to more focus on the regular season. Whether it has translated to increased action on the track is debatable, but it is definitely what most of the talk in the series has been about.

In a Nutshell – The teams are embracing the “win and you’re in” philosophy, at least from Victory Lane. There have been a few strategy calls that have been made which probably would not have been made last year, but most of the talk of being in the Chase and feeling secure has been from the seven teams who have won a race. While the odds of there being more than 15 winners after the first 26 races are slim, it is certainly a possibility. With that thought in mind, only Kevin Harvick is truly safe, although he still needs to make sure to stay above 30th place in points. With 18 races until the cutoff, the thought process now is still to “win and be in.” When it gets down to eight to go, teams will evaluate where they are and determine if they have to win or if the point standing option is still available to them.

Dramatic Moment – The first eight races have had several dramatic moments, but from a health-of-the-sport perspective, nothing was more dramatic than its Most Popular Driver winning the biggest event. The rain delay may have hurt the television ratings, but having the world outside of NASCAR talking about Dale Earnhardt, Jr.brought more interest to the sport than any other driver who could have won February’s Daytona 500.

Dale Earnhardt, Jr.‘s win started the season with a bang. But will interest remain throughout the year?

What They’ll be Talking About Around the Water Cooler

The racing is better. While the series has been to a variety of ovals, including two short tracks over the first eight events, the racing has been better than it has been in years. On-track passes for the lead have been up in every race. The aggressive competition at the Daytona 500 was evident from the end of the rain delay until the checkered flag. Drivers have been racing harder for spots deeper in the field, which has manifested itself in more green-flag passes and lead changes. While things aren’t perfect, the product on track is much improved compared to what it has been for some time.

The tires are better. That, again is partly due to the fact that the tracks the series has visited do not have brand new asphalt, but the skins that Goodyear has brought to match so far this year have been great. They have given up quickly and kept people from staying out extended green-flag periods; the tires have also given teams the chance to take two at some points with an obvious risk and reward. While Kansas and Michigan loom on the horizon, and the tires there will probably harken back to the Flintstones, it does appear the people at Goodyear have finally started to bring tires to the track that will wear out in a fuel run or less. If they keep this up, the year should be a great one, especially as we head towards the summer months.

The cautions are still questionable. The job of calling a race is definitely not an easy one. The right time to throw a caution is never black and white. However, the number of late-race yellows continues to grow in number and the legitimacy of them is becoming more and more in doubt. The Chase is coming down to a single race for a championship. The four cars that will be eligible will most likely not all be running well enough near the end of the Homestead race to win the title. If NASCAR throws a caution in the last 10-15 laps, just for the sake of bunching up the field and adding some “excitement,” it will invalidate the entire season. Let’s hope that they see clearly, start showing us the debris on the track and do everything they can not to throw a late-race caution at Homestead.

The future of NASCAR is incredibly bright. For several years, there has been a dearth of talented rookies coming into the Cup Series. There has also been a dearth of quality rides for them to slot into. But the upper echelon drivers in the Cup Series are beginning to age close to retirement, and the latest crop of truly talented drivers ready to fill their seats is outstanding. Kyle Larson and Austin Dillon lead a stellar rookie class already in the Cup Series. Chase Elliott, Ty Dillon, Ryan Blaney, Bubba Wallace, Dylan Kwasniewski and Chris Buescher are among those who are waiting in the wings for their opportunity. The talent that is going to be maturing in the Cup Series over the next 20-30 years is set to take it back to where it was if the racing can carry it there.

Kyle Larson’s move to Cup already looks like a smart one. He looks like he’s leading a charge of younger drivers.

The schedule is due for a change.While the odds are that there will not be major changes to the venues on the schedule, it is time for a revamping and a mix-up of the tracks that settle the championship. The series truly needs to get back to its short track roots, but the simple fact is that the folks at SMI andISC are not going to forego their races in the name of the better health of the sport. Assuming we are going to stick with the Chase, it is time for the content of the Chase to change. The overabundance of 1.5-mile tracks with the lack of a road course is simply unacceptable. A true champion should win over all types of tracks on the schedule, right? Well, Sprint Cup’s includes road courses, a different type of challenge so one needs to be in the Chase. While the series isn’t going to South Boston, Myrtle Beach or Irwindale anytime soon, it needs to have a race course with right-hand turns in the lineup that determines its champion.

The Hindenburg Award for Foul Fortune

Swan Racing has had some horrible fortune this year. A couple of the problems have been self-inflicted, but it is a shame that they are struggling for funding and possibly going to shut down one of their teams. Frontstretch heard rumors of this pending difficulty before Darlington but was unable to confirm it during that race weekend. While the details of the rumor were more telling than Swan’s tweet, the future does not look bright at this time for the little team.

BOWLES: What Swan’s Demise Tells Us About NASCAR Now

Kasey Kahne has had foul fortune on multiple fronts this season. Not only does he have four finishes of 22nd or worse, his best one is eighth, twice. He is in his penultimate contract year and Chase Elliott is making all sorts of noise in the Nationwide Series. Kahne usually has a hot streak where he will win a couple of events, sometimes within a four-to-five week span. Well, he better hope that happens this year or the rumblings will be much louder about his job security come 2015.

The “Seven Come for Eleven” Award for Fine Fortune

Kurt Busch has always had immense driving talent. Kurt’s personality has cost him dearly over the years, but having a champion for his cause in Gene Haas has put him back in equipment that is championship caliber. That, coupled with the marriage toDaniel Knost, has turned into a potent combination. While both have been bitten by some horrible luck this year, they also have a win and have been contending before their luck has turned sour. With 18 races to fine-tune before the “playoffs,” Busch is primed for a title run in 2014.

Carl Edwards pulled a rabbit out of his hat at Bristol and took the biggest step towards locking himself into the Chase. He’s also wrangled a second top 5 at Las Vegas. While Edwards hasn’t had a bad race yet, he’s got the fewest top 10s among the top 5 in points. He’s the only Roush Fenway driver in the top 10, and the Fords have not been as competitive as the Toyotas and Chevrolets. The fact that Edwards managed that win was indeed some fine fortune.

The points have not changed since the last report. The more important stat, until we get much closer to Richmond the second time around will be winners. For the foreseeable future, we’ll just track winners in this section.

Overall Rating (On a scale of one to six beer cans, with one being a stinker and a six pack an instant classic) – It is early in the season, so the grading is subject to great change. At this point, the season has been quite good and, compared to recent years, it has been even better. Having only been to two mile-and-a-half tracks might be skewing the grade but for now, it is a five chilled Carolina Blonde season. When the Intermediate parade increases over the Summer, it could drop or even go up — we’ll just have to wait and see.

Next Up — The ¾-mile oval at Richmond. The mini intermediate that thinks it is a short track often provides some of the best racing all year. We’ll see next weekend if it can keep up the streak that has been going on so far in 2014. The race is Saturday, April 26th at 7:00 PM, available on Fox and MRN.