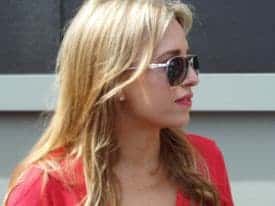 Brittany Force is trying to make a name for herself in NHRA competition.

Brittany Force, driver of the Castrol EDGE Top Fuel dragster and daughter ofNHRA legend John Force, took some time out during the 4 Wide Nationals weekend at zMAX Dragway in Charlotte, NC to talk with our Toni Montgomery. A 2013 NHRA Rookie of the Year, Force is trying to follow in the footsteps of her famous family while doing it her own way, driving in a different division with more speed and perhaps a greater learning curve.

Force, nicknamed the Fastest Force, explains why she went with a Top Fuel car when the rest of her famous family drives Funny Cars, what it’s like to be part of the sport’s “First Family” and her thoughts on being a woman driver in a male sport. By the way, be sure to check back tomorrow for another NHRA-themed installment of Beyond the Cockpit with Top Fuel driver Tony “The Sarge” Schumacher.

Toni Montgomery: Everyone else in your family drives Funny Cars but you drive a Top Fuel car. How did that happen?

Brittany Force: I started in Super Comp and then I moved up to A fuel, which were dragsters. Both Courtney and Ashley [Force, Brittany’s sisters] also drove Super Comp and A fuel. But for me, I really liked my A fuel dragster and that’s where I planned on staying.

Brittany Force is trying to make a name for herself in NHRAcompetition.

I’ll always try something once. I jumped in the seat of it and made some passes. After I made my first full pass, I was hooked and I knew I wanted to drive a Top Fuel car and everything that I’d planned changed. But really, I just wanted to do something different. We’ve only done Funny Cars. That’s all we’ve ever known. So I thought it would be something exciting and it’s been a challenge bringing a Top Fuel car into our pits, because like I’ve said, we’ve only known Funny Cars. So it’s something new, it’s exciting, I love it, it’s a challenge and I’m looking forward to hopefully bringing home the first win for John Force Racing in Top Fuel.

Montgomery: How did it affect your learning curve since you didn’t have teammates driving the same kind of car to rely on, and your guys are working solo, too.

Force: Yeah, we are on our own. We don’t have a teammate to work from. We’re out here on our own. But I still go to my dad, Courtney, Robert; even though they drive Funny Cars, there’s still a lot of questions that I have that they can help me out with. They can give me advice for those questions like staging or certain things, certain feels in the car. When I feel something, what am I feeling would be the question. So I’m always able to go to them for advice and that’s always great.

I’ve also had many people that I compete against offer, if you ever need help, if you ever have a question, come on over, I’ll talk to you about anything. So the great thing about this sport is everyone seemed pretty welcoming and I’m very lucky to have that, but I still go to my Dad and my sister for stuff.

Montgomery: As a woman driver, women have been much more successful in theNHRA than any other form of motorsports but do you still sometimes find that maybe you have to work a little harder to prove you can do this?

Force: I don’t think so. I don’t really feel like there’s that battle of women coming in the sport. I know years ago it was, but I just don’t feel that pressure of the line between male and female out here. I feel like everyone is very welcoming and I feel like it’s not really an issue out here.

I think it’s also helpful that it’s more of a family sport. I grew up here as a kid so some of these drivers I am competing against, I grew up watching. I think that has a lot to do with it. We all kind of grew up out here as family. I don’t really feel that pressure.

Montgomery: How nice would it be to score that 100th women’s Pro win?

Force: That would be awesome! Right now, we’re just going after our first win ever for the Castrol Edge Top Fuel dragster, first win for John Force Racing. We’re going after it. I want it so bad. I wanted it last year but being our rookie season, the year was a challenge.

Our rookie season, we weren’t able to do it. We made it to a semifinal so we came close, but I feel like we’re off to a good start this year. In Phoenix, we made it to our first final and that for me it was just, I felt like I had won the race. I was so excited. Even though I lost, I obviously wanted to win, but getting out of the car I was just so overwhelmed that we made it to a final so I was excited and my guys were excited. We’re still going off that momentum and that excitement coming here and last weekend in Vegas, but I definitely think a win is in our future and we’re going to go after it. Not just that, but there’s the 99th and 100th win so we want to go after that. Just to be grouped into some of those women that are on that list would be a big deal.

Montgomery: It sounds like you are pleased with your progress.

Force: Yeah, I am. Like I said, last year wasn’t easy. It was my rookie season so I’m still learning and our team is still learning trying to figure out a Top Fuel car, but I always try to stay positive about anything, no matter what the case is. You went out in the first round. Yeah, it’s a bummer but I try to put a positive spin on it. For my guys, my team, my fans and myself. Everyone. I feel like we’re off to a really good start this year and I’m thinking we’re going to hopefully move up and get a win.

Montgomery: You mentioned the NHRA being a family-oriented series and your team is entirely family. Does that bring another dynamic to it? Are you more competitive because you are family?

Force: I definitely see that competitiveness between Courtney and my dad because they compete against each other. It’s kind of bittersweet. You can definitely see that between them. I can hear them when we’re in the bus before they’re getting ready to go out to run against each other and they’ll be saying things back and forth to each other. I don’t get to race them, which can be a good thing but it can be sometimes a negative thing. I think we’re all pretty competitive. We’ve all always been competitive but at the end of the day, we’re all going to be cheering each other on.

Montgomery: When you guys were growing up around drag racing, did your father seem surprised when you all said you wanted to do this or did he expect it?

Force: I think he was shocked. I think he’s still shocked that we’re all involved in the sport of drag racing. But he was on board 100 percent wanting to be involved. It’s so funny because my Dad is so paranoid about everything. I mean everything.

I think he’s still shocked though that we’re all involved. He’s still trying to get me into a Funny Car. I told him I will jump in a Funny Car the day you jump in a Top Fuel car. I wouldn’t be opposed to jumping in and getting my license just to feel the difference but I know that I like driving my Top Fuel car. I think more than anything, he loves that we’re all out here. It is hard to find that balance sometimes between boss and father, but I think anyone that works with their family comes across that. I love having everyone out here. It makes my job so much easier. Courtney is just a pit away and we can go talk about our runs at the end of the day and I can go to my dad. It’s very nice that we’re all out here together. Most of the time, anyway.