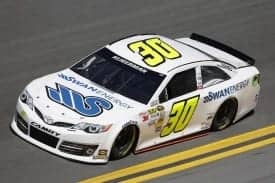 Ben Stiller is no longer the Heartbreak Kid. The role now belongs to 23-year-old Parker Kligerman.

Kligerman didn’t marry a crazy woman after knowing her for six weeks, then fall in love with someone else on his honeymoon, nor did he act in a subpar comedy. His story is full of heartbreak, though, just the same.

The latest scene, yet to be completed has Kligerman uncertain of his future — and probably soon without a ride — eight races into his rookie Sprint Cup season. His team, Swan Racing, is “reviewing its current situation” according to a press release from last Thursday because its owners apparently thought that when they expanded to two cars this offseason, the sponsor fairy would come and cover their 25th-at-best-place cars this year.

After struggle in Daytona, it seemed like Parker Kligerman’s season could only go up… until now.

Swan Racing apparently also didn’t realize that young rookies crash cars; that’s why a lot of teams stay away from them, actually. Jeff Gordon did it and I’m pretty sure J.J. Yeley is still wrecking Joe Gibbs Racing equipment, even though he hasn’t raced for the team in years.

Kligerman’s sure to land another great ride in Sprint Cup with the eight-race highlight package he can send to teams. The top zinger features him caught up in someone else’s wreck during Daytona 500 practice, getting thrown into the catchfence and sliding down the track on his roof. By the way, he’s 38th in points.

That’s kind of how it has gone for Kligerman since he entered NASCAR in 2009. That year, as a Penske Racing development driver in ARCA, Kligerman won nine of 21 races and finished second in the standings. He won the pole in his Nationwide debut that year. In 2010, he was given 12 Nationwide races and one truck one in subpar equipment until he caught a break. In 2011, he was named a full-time driver for Brad Keselowski’s truck team and delivered. He finished 11th in points driving the only Dodge in the field.

After 11 races in 2012 with Keselowski’s team, Kligerman — coming off a seventh-place finish — was released from the truck ride and from his developmental deal with Penske to make room for another rising star, Ryan Blaney. Never missing a beat, Kligerman had a ride by the next week with Red Horse Racing in trucks and reeled off three consecutive top-5 finishes. He won a race at Talladega later in the year and placed fifth in points in what was clearly better equipment.

Kligerman parlayed that performance into a full-time seat with Kyle Busch Motorsports, the year after Busch went winless driving his own equipment. It turned out Kligerman couldn’t win in it, either, but he finished a respectable ninth in points before his team folded at the end of the season. Probably anticipating that fold, Kligerman ran two Cup races last November with Swan Racing and gave the team one of its best finishes all season, 18th, at Texas.

That’s how he ended up with Swan at the start of 2014. The organization came upon a little money and blew it like a kid in a candy store. Instead of strengthening its one underfunded team, Swan expanded to two cars, with Cole Whitt in the other seat, and prayed to the sponsor fairy that more money would come. It didn’t and now Whitt and Kligerman don’t know if they’ll be racing at Richmond as a result.

Kligerman’s story is similar to what Aric Almirola faced a few years ago. He was a Gibbs Racing development driver until the infamous night at Milwaukee when he was pulled from the car midrace in favor of Denny Hamlin. At least Hamlin won the race in Almirola’s honor — still the driver’s only Nationwide win. Almirola then signed a part-time Cup deal with Dale Earnhardt, Inc. and was supposed to learn from Mark Martin for a year during his third of 33 retirement tours, only Martin shockingly didn’t retire and Almirola, with no sponsorship at DEI was soon out of a job and back in Trucks. He had to climb the NASCAR ladder all over again to get back to Sprint Cup.

Kligerman might face a similar journey, but there’s no guarantee he ever gets back to the top, nor that NASCAR’s Heartbreak Kid ever gets a fair shake. The good news is he is only 23. If he has to leave Swan and take a step back to Trucks or Nationwide, it might lead down a better path to Cup. He won’t be subject to years of wasting his talent with an underfunded and clearly poorly managed Cup team. But a lot of drivers only get one shot at the big time, even if it was the worst shot ever.

During an interview with Frontstretch’s Beth Lunkenheimer in September 2012, Kligerman spoke about his release from Penske.

“I just have a saying that I’ve lived by my whole life and that’s ‘it will all work out — always has, always will.’”

A year and a half of letdowns later, I wonder if NASCAR’s Heartbreak Kid still feels that way.