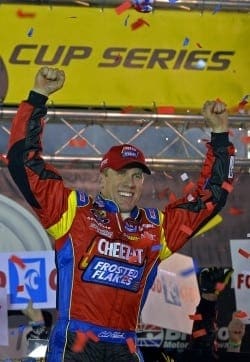 Carl Edwards has quietly been leading Roush Fenway Racing back to prominence in the Cup Series this season.

Let’s get this one out of the way first: there was no NASCAR race to cover over Easter weekend. Sad, isn’t it? No worries, Hot or Not isn’t taking a break. Instead, here’s what to expect when the Sprint Cup Series returns to action at Richmond International Raceway in the coming days.

Note: drivers featured in last week’s edition aren’t highlighted this time around. The rules are set, so here’s Who’s Hot and Who’s Not:

Carl Edwards is the perfect leadoff candidate. Not only has Edwards been hot this season, but he also did his part to claim this spot last season. Cousin Carl was incredible at Richmond, finishing sixth in this race last Spring and then winning there during the Chase.

Carl Edwards has quietly been leading Roush Fenway Racing back to prominence in the Cup Series this season.

Edwards has quietly led the way for Roush Fenway Racing in 2014. He’s been well under the radar over the last four dates, with finishes of 10th, 13th, 14th and 13th. However, he’ll be fine; after all, he’s already won a race (at Bristol) and ranks third in points behind Jeff Gordon and He-Who-Cannot-Be-Named (at Roush, anyways).

This spot seems like the perfect time for an extended RFR shoutout, given the RIRsuccess of Ricky Stenhouse, Jr. and a rejuvenated Greg Biffle.

Biffle has discovered the form that could save his job with the organization he’s been with for his entire Cup career. After five races with finishes of 12th or worse, he has posted top sixes in back-to-back weeks, but that doesn’t tell the complete story. Biffle began the turnaround at Martinsville, where his average running position was back up to 13th, his highest of the season at that point. Then, he learned how to close things out on a high note two weeks later at Darlington.

Richmond isn’t Biffle’s strongest track, and he might not break into the win column in round nine. But if he continues to grasp the new setup rules, anything is possible, with several Biff-friendly venues remaining on the schedule.

What’s Stenhouse doing up here? Well, it seemed appropriate given his RFRaffiliation and 13th-place average finish at Richmond (or his fifth-best average among Cup tracks). It hasn’t been the strongest year for the No. 17 team, experiencing a sophomore slump but a second at Bristol leads to potential he’ll turn things around Saturday night.

It’s hard to classify Clint Bowyer so far this season; but speed-wise, he seems Chase-worthy. Nevertheless, speed alone won’t get a driver into the playoffs. Placing well is far more important, and good finishes haven’t come easily for the No. 15 team. Whether it is because of an untimely speeding penalty or a dropped lug nut, pit road mistakes have been Bowyer’s bane, and part of the reason he’s only 16th in points.

Finishes of ninth, eighth and 12th in the last three races signal that things are turning around for Bowyer; however, given his Richmond resume (including a win in 2012 and runner-up last season), the best could be yet to come.

The same could be said for Ryan Newman. Newman hasn’t exactly dazzled since joining forces with Richard Childress Racing, but he has done well enough to lead the way for his new organization. Fresh off a 10th at Darlington, Newman takes his talents to Richmond. He finished third there last season and possesses an 11.4 average finish.

To make the Chase, Newman will likely need to win eventually. Getting the No. 31 Chevrolet into victory lane in Virginia this weekend is unlikely, but not impossible; he won there in 2003 and was leading last fall before well… you know…

There’s no denying that Team Penske got off to a fast start. Its cars, driven by Joey Logano and Brad Keselowski, have been among the fastest during qualifying and practice; that speed has often times been converted to success on race day.

Along the way, though small reliability hiccups have caused occasional problems for Penske. Mechanical issues, then reared again at Darlington for Logano. He began having brake problems, which compounded because of a broken right-front hub that sidelined the No. 22 machine for the remainder of the race. He finished 35th, as a result and dropped to eighth in points.

That left Keselowski to hold the company banner, but he struggled during the final set of restarts and finished 17th, dropping to seventh in the standings. It’s a good thing that this is an organization-based mention for Keselowski because he’s been downright freezing from an individual standpoint since winning the third race of the season. He has suffered through five consecutive starts with finishes of 14th or worse.

Judging by its drivers’ past showings at Richmond, things could continue to decline. From an output standpoint, Logano and Keselowski are merely mid-pack drivers there, with no wins and only four top 10s in 19 combined starts.

Paul Menard‘s recent hot streak came to a screeching end thanks to a 41st at Darlington. So, what’s the deal? Menard was doing fine until his lap 202 cut tire.

Menard is known for his fast starts, then a reputation for fading once the summer months come around. This finish was a huge knock for him in the points, a fall from 10th to 18th in one race which at this point is pretty bad. That, combined with mediocre Richmond numbers will likely contribute to a return to normality.

Martin Truex, Jr. remained with his brother in the cold ranks after another letdown in Darlington. Truex couldn’t take advantage of a favorable track en route to a 27th, his fifth straight result outside the top 15. That makes two consecutive starts at tracks that history suggested he would be successful at ending in a less-than-desirable manner instead.

Truex hasn’t found the form that almost got him into the Chase last season since signing with Furniture Row Racing. Either the organization has struggled with the new rules package or maybe Truex isn’t as good in lesser equipment. Something is wrong in the No. 78 camp — and the end isn’t in sight.