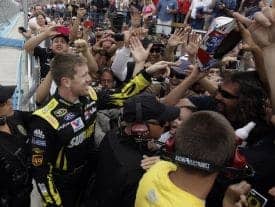 Edwards' popularity with fans and sponsors might help him find a ride, but apparently not with Penske Racing.

Author’s Note: I wrote the original version of this column in 2010, but I’m realizing that we still need a reminder of what’s right with the sport. Yeah, there’s a lot wrong with it, too. But at the end of the day, there are 43 men and women out there on the racetrack risking their lives because they want to compete at the highest level of a sport they’ve loved since childhood. Not every one of them in making a seven-figure salary, and some of them know they have no chance of winning, yet they do it anyway. At the end of the day, NASCAR can throw a questionable caution or make a bad call…and it might change the numbers on the pylon, but it doesn’t change anything fundamentally: every driver tries just as hard to win, and whoever does prevail does so because of a day’s worth of strategy and determination. Racing is, in the end, simply about the people involved —the drivers, teams, and fans. Nothing more. I’ve made a few changes to the words because things change in four years, but I still believe in what really matters when the day is done.

Ever have one of those conversations where what you take away isn’t really what the whole thing was about? I have, and it made me think. It was a pretty run-of-the-mill Frontstretch staff meeting; you didn’t miss anything new and Earth-shattering by not being there. But what you did miss was the heart of it all. After some of our staff members finished our conversation about the week’s hot NASCAR topics, the conversation fell to baseball, among other things.

Baseball was my first love. I don’t remember a time when I didn’t love the game. I could read “Yastrzemski” before I read Dick and Jane. When my Dad took me to Fenway Park, its confines were more like the field of my dreams than the wide open spaces where I grew up. My first job after college was working in fan relations for the Richmond Braves. NASCAR was that sport that meant we had no fans at the ballpark when they were in town.

When the conversation led around to talking of going back to baseball, though, I realized that I don’t want to. I deeply love the game and always will, though it lost a little luster for me when I lost my Dad; it’s not as much fun to watch without him. But if I had to give up writing about racing to do it, I realized that I don’t think I could. The music of the engines at full song is too strong a siren’s cry for me.

There are times I hate NASCAR. It’s so easy sometimes to see “where things went wrong” and “what needs to be changed but never will as long as Brian France runs the show” that it’s easier to complain than to think. I hate the Chase and I will never believe it’s a legitimate championship system for a sport where, every single week, there are 42 losers. I really hate the way the Nationwide Series has changed in the last decade. But underneath it all, I still love racing.

Racing isn’t those things above. It’s not about the stupid playoff system, it’s not about the greed of the television networks. It’s not about Brian France, nor is it about how ugly the car is, nor the thousandth of an inch that whatever car was off last week. Really, it’s not about NASCAR at all, except that NASCAR is its largest national stage. It’s what racing is about that still makes the heart race at the roar that comes after those most famous words in motorsports.

It’s the fans that continue to drive the sports, even when nothing else seems to be.

It’s not about Brian France; it’s about the fans. No, they’re not coming in droves like they once did. But when you do go to the track, talk to the stranger in the old Bill Elliott or Richard Petty or Dale Earnhardt t-shirt sitting next to you. Don’t talk about the state of the sport-that fan already knows about that. Talk about what used to be. Talk about the drivers who have come and gone along the way — not just the Elliotts and Pettys and Earnhardts, but about the Benny Parsons, the Ward Burtons, the Ricky Cravens. Talk to the family in the stands whose kids sport the gear of two heated rivals and who don’t care about all that, just that their heroes go fast and make them cheer. Take a lesson from those kids; our sport’s heroes still go fast and make us cheer, from the local short tracks all the way to Talladega. As bad as the rest gets, there are 43 men and women out there doing all they can to run fast and turn left.

It’s not about the race car; it’s about how racers drive it. No, they’re not stock anymore and haven’t been for decades, unless you go back to the street stocks and four-cylinders at short tracks everywhere. But those men don’t want to win any less and their fans should not cheer for them any less because the car isn’t what we want it to be.

It’s not about a driver who “wins too much;” it’s about a kid who had big dreams and, against the odds, made them happen. One who had to grow up too fast because racing takes as well as gives. One who races with a raw, hungry tenacity borne not of arrogance, but of fear. Fear that he’ll wake up and it will all be gone, because under it all he’s still that same kid with the impossible dream. He wins because he’s scared not to win.

It’s not about the driver who starts and parks, either; it’s about the racer who loves his sport enough to make a few in return for jeers and disparaging comments, because he’d rather race those few laps every week than not race at all. He hangs on each week hoping beyond hope that someone will notice him like they did that other kid. He doesn’t get rich, but he doesn’t get bitter, either. He knows what he’s up against. But he keeps trying, every single week, because he’s every bit as hungry as the one who wins too much and every bit the competitor that those other 42 are. He races because he doesn’t know what else to do.

It’s not about the shill in the television booth, it’s about one of the greatest racers the sport has ever known. A lot of times that racer gets in the way of the broadcaster. But the real shame is that so many fans don’t know the racer at all but only the shill in the booth. He drove a race car once — brasher than anyone, bolder than anyone. He was arrogant and backed it up every step of the way. There was no fear in this one, only the burning desire to be the best-and for a time, he was. The broadcaster and the driver are the same man, but the racer always came first. At least until too many people forgot.

Really, it’s not about NASCAR; it’s about racing. The sanctioning body has distorted it and bastardized it, but they can’t take the essence of it. They don’t even control much of it-the racing to be found at the local tracks, even the NASCAR-sanctioned ones, remains unspoiled, a window to what racing once was, before the TV contracts and the hype, before the t-shirts and diecasts. At those tracks, as in NASCAR, there’s the kid who wins too much because he’s scared not to. And the one who races the lowliest car because it’s still better than staying home. And the guy whose racing days are long past, but who still feels the pang every time the engines fire. There are still the fans, cheering for their heroes who go fast. It’s about the racing. It’s about the fans and the racers who show up every week from the local bullring to the Daytona 500. It’s not about NASCAR; that just gets in the way.