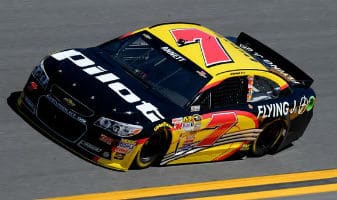 Michael Annett’s No. 7 car is just one of two fielded by Tommy Baldwin Racing.

Tommy Baldwin has been involved in racing since he was a youngster, an innovative mechanic who worked his way up to NASCAR Cup crew chief by 1997. In 2008, he was working in that role for Bill Davis when he was informed that the team was closing. He purchased the equipment and took advantage of the downsizing of many teams in the garage to put a lot of talented minds behind a startup organization of his own, Tommy Baldwin Racing.

Some wondered whether TBR would make it past a couple of months. Well, here we are on year six of the organization and there’s not one but two cars taking to the racetrack, a sign of how one of the sport’s independent thinkers has done so much with so little. Baldwin talked with Frontstretch before the Southern 500 at Darlington and touched on a lot of topics, including the growth of TBR. He explained why he bought his race team, the history of the number 7, expansion and his activities away from the racetrack.

Mike Neff, Frontstretch.com: Why in the world did you decide to own a race team?

Michael Annett’s No. 7 car is just one of two fielded by Tommy Baldwin Racing.

Tommy Baldwin, Jr.: I fell and hit my head. It was just timing, to be honest with you. When I was at Bill Davis Racing, the program was sold a week before Christmas and there weren’t any jobs left, obviously by then. There was some equipment available and a lot of people were let go from various race teams because the crunch was coming. We’re not going to call it a recession, but we’ll call it a recession. I just felt that it might have been a good chance to take advantage of the things that were available and I went for it.

Neff: A couple of years ago, you decided to expand to two teams. What drove that decision?

Baldwin: Fell and hit my head again. It is easier to run two cars than one. It is just another selling point. Teammates working together. Doing the things that we need to do there. It was an opportunity because there weren’t a lot of cars showing up, so it was an opportunity to start something again. Not saying any of this is paying off yet but we’re heading in the right direction.

Neff: The 7, or more specifically the 7NY. That is a special number in the Northeast but a lot of people might not know the history of it. Why do you hold the 7 so dear?

Baldwin: Obviously my dad. We’ve had the number seven in the family for a really long time. A long, long time and it was pretty cool that it became available andNASCAR let me have it. It is pretty cool seeing that car unload every week and running around the track. It just keeps it in the family.

Neff: Where did you start out your racing career?

Baldwin: Obviously, we’re from Long Island, New York and I just grew up racing. Back when I was young, my early teenage years and even younger than that, we could race four times a week and sometimes not even leave Long Island. There were four race tracks: Freeport, Islip, Riverhead and Westhampton were all open and ran on different nights. We just raced and learned how to race. One day, I packed up my stuff and decided to see if could make it down South.

Neff: Did you have a driving career or was it always turning wrenches?

Baldwin: No, my dad always wanted me to work on his stuff so he never let me drive. I think that came more from my mother than my dad, the not letting me drive (laughs). I always liked working on them and trying to make them go fast.

Neff: What year did you decide to move to North Carolina and what ultimately drove that decision?

Baldwin: Yeah, we had a lot of success before we moved down. Won a lot of races and I was with a lot of good people. Just decided one day I’d had enough and said I’m either going to do it now or I’m never going to do it. I decided on a Saturday that I was going to move down and Sunday morning at 4:30 AM, I was packed up and on my way.

Neff: What hobbies do you have outside of racing?

Baldwin: I love playing golf. I don’t have much time to do it these days but golf is a good hobby. You have your family. I just love doing kid stuff, going to all of their games and stuff but throwing in a little short track racing is pretty fun, too.

Neff: Is the family doing any racing on the side at this point in time?

Baldwin: To be honest with you, I’m trying to let them lead their own lives and figure out what they want to do. There’s no push from me. I wasn’t pushed into the sport. Back then, if I wanted to hang with my dad I really didn’t have a choice but to go to the shop and work on the cars and go to work at his shop during the day. I just picked it up. It is a little bit harder to do now because what we do now is a serious job. It is harder for the kids to come in and mess around and do what we did when we were younger. Just letting them feel their lives out and if they go this direction, they will go this direction. If not, they’ll do something else.

Neff: How proud were you, being from the Northeast, that Richie Evans was inducted into the NASCAR Hall of Fame?

Baldwin: It was good for the whole Northeast. Richie was the best of the best while we were growing up. There are a lot of stories. I was around a lot of those stories. It was pretty cool to help that whole process. Having our car lettered up as Richie’s Hall of Fame car and to have his family come hang out with us and do the filming of stuff that will be in the archives forever… it was pretty cool being part of that.

Neff: Of other Northeastern racers, whether in Modifieds or not, who else do you think should be getting close to being in the Hall of Fame in the near future?

Baldwin: Geoff Bodine was very successful when he got down here and he won a lot of races up there. And Jerry Cook with seven championships and Mike Stefanik with a total of 10 or 11 championships, between all of the things he accomplished in the Busch North Series, now the K&N East Series, and the NASCAR Modifieds. Those would probably be the next choices. There are a bunch of people that you’d like to see included. Freddie DeSarro, Bugsy Stevens, and Pete Hamilton even. There are a lot of people who have had successful careers up there that a lot of people down here don’t know about. Hopefully, some things will come up. At least, if they are nominated, their story can be told and people can learn a little more about everybody for sure.

Neff: What is your favorite local short track in the Northeast or anywhere, for that matter?

Baldwin: We had success at a lot of different tracks. Where we were brought up, at Riverhead Raceway was pretty special. It was very competitive. We learned a lot racing 26-28 cars and starting deep in the field every week on a little quarter-mile bullring with two-wide racing every week. It wasn’t a single-groove race track, so we learned a lot about the track changing and the stuff that we deal with here. There are three different seasons at Riverhead where the track changes and we had to follow that. We took all of that knowledge and brought it down here and I’ve done OK.

Baldwin: Yeah, the dirt program still is. We’re gearing up. We’ve run a couple of races this year. Now, it is a two-car team with Matt Sheppard running the second car. We’re excited about that even though we’ve only run a couple of races. The ice is just starting to thaw up there. Hopefully, we’ll make some progress on that this year.

Neff: Is there any chance of those guys getting a NASCAR shot if they want it?

Baldwin: I don’t think so. That is a different breed up there and the things that they do up there. You can still make a good living racing dirt up there so I think they’re pretty content doing that.

Baldwin’s teams didn’t have the kind of result they were hoping for at Darlington. Michael Annett blew a tire and killed the right front of his car. The team brought it into the garage, rebuilt the suspension and sent him back out only to have him blow another tire and damage it irreparably, finishing only 101 laps. Reed Sorenson, meanwhile ended up parking his car due to overheating with a little under 100 laps to go, a No. 36 that remains in search for sponsorship for most of the remaining races this season. Sorenson and Annett are 31st and 33rd in points, respectively but have made all eight events so far with a back half of the grid that’s more competitive. Baldwin is doing it the old fashioned way, working with a bunch of racers and two sponsors who are committed for the entire season. There are a lot of fans from everywhere, not just in the Northeast, who want to see him succeed.