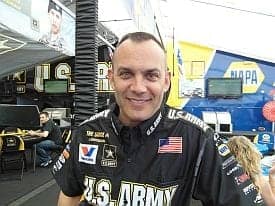 Tony Schumacher finds a certain calm inside a car that can be incredibly dangerous if not set up correctly.

Tony “The Sarge” Schumacher and his U.S. Army Top Fuel dragster are probably a familiar site to many motorsports fans beyond even those who follow the NHRA. At age 44, he’s won seven Top Fuel titles, a series record while setting the world record for the fastest run in a dragster, approaching a speed of 338 miles an hour (337.58, to be exact). It’s almost twice the speed of the pole run for NASCAR’s Southern 500 a few weeks ago.

How does Schumacher’s type of competition compare? We find out as he took some time to talk with Toni Montgomery during the 4-Wide Nationals weekend at zMAX Dragway in Charlotte, NC. Find out what it’s like to drive a Top Fuel dragster, how Army thinking helps a race team perform, and Schumacher’s thoughts on the unique atmosphere that is an NHRA weekend at the track.

Don’t forget to check out our other Beyond the Cockpit features with NHRA starsRon Capps, Alexis DeJoria, and Brittany Force too!

Toni Montgomery, Frontstretch.com: Talk to me about driving the Top Fuel car.

Tony Schumacher finds a certain calm inside a car that can be incredibly dangerous if not set up correctly.

Tony Schumacher: Probably a few guys in every motorsport I think, no matter which one you look at, they’re good at being ice cold, and I think that’s what’s so necessary in drag racing. There’s no laps, no making it up, no mulligans, you don’t get to drop another ball. You can see the finish line from the starting line. There’s not many sports like that. You’re sitting in that car, all the control, the difference between winning and losing is how straight you can keep it. How hard you can work to keep that car straight. A lot of guys focus all on reaction time…

Schumacher: The calmness in a car that’s so uncalm is what’s so intriguing about these. Watching Capps just pushing levers and all the guys in the back are like, we’d just like to touch that car. It’s an intense machine.

Schumacher: Yeah, they’re evil. But all these features I do, I talk about the result of a day and it always is directly related to the preparation that goes into it. Because our race is three seconds, we probably overthink that and overemphasize that. All that preparation for three seconds. If you’re a thousandth late, all that work’s done in three seconds. And you can see the goal. Like a baseball player, he’s up to bat, he can see that. A football player, he can see the yard lines or the end zone where he’s got to get to. There’s not many jobs where it’s like that. Most people work normal jobs. The job is to get their job done for the day and tomorrow, there’s going to be a different job. We have so much pressure to win these championships, to win these races. We’re not kidding ourselves. We’re not racing some average Joe. These guys are great. They got nine guys running that are also great at their job. They’re pretty special people. We’d be foolish to think we’ve got an easy run, no matter who we’re racing. We can see this goal right there out in front of us. It’s like that carrot, you know? So what do you do to prepare for that moment. That’s pretty cool. It’s a good Army value that we talk about.

Montgomery: It strikes me about this sport how much everything has to come together just right to get a good run. That’s so different from NASCAR where if you have a bad lap, you just have a better next lap.

Schumacher: Right. You hear them talk on the radio, this is tight, this is loose, we can fix it. You can adjust if you’ve got the right guys. You can have the wrong guys and you can adjust on it all day long, and it won’t work but if you have the right guys, [you can get it right eventually.] This is a more intense sport for that goal. If you have a bad lap here you can go home, or worse.

Montgomery: This is the 4 Wides event and it’s even more intense. You don’t do this anyplace else. Does it require more focus?

Schumacher: We don’t do this anyplace else. It takes more focus because it’s different. I want to be a machine, right? I pre-stage, I stage, I race. Whether there’s two, thirty, fifty, or four cars, that shouldn’t matter. But it’s different. We’re average. We train to do our job and we’re good at it and when you change it… Mike Tyson is great at boxing one guy, but if you put three guys in there, he doesn’t know which guy is going to hit him. Different world. It’s a lot like that. When I run Larry Dixon or Kalitta, people stand up because it’s going to be a marquee matchup. When there’s three other people, you’re just surviving. It’s different. It’s a different sport. It’s different than what we’re used to, it’s what we train our whole life for but it’s not that. It just takes a little getting used to. We usually come in and by the third or fourth run, we got it down but it takes a couple. I’m surprised how smooth our first run went. We’ve been doing this for a few years now, but other than that, because the other 23 races aren’t anything like this, you know?

Montgomery: Let’s talk a little bit about your sponsor, the Army. I’m an Army veteran and even now, 20 years later, there are a lot of Army values I use every day.

Schumacher: Absolutely, that you never would have gotten anyplace else. I tell people that all the time. What most people don’t get is our recruiters aren’t trying to recruit an average guy because they’re only recruiting for a few years and they’re going to step off a helicopter with the same kid they recruited. When I talk about training with my guys, when I look out of my visor when we’re about to make a run, Ryan (McGilvry, team member) starts my car and the last words I hear, he says “Here we go.” That’s my calming words, “Here we go” as he spins over this 10,000 horsepower engine. I know that to be the champ, like in ’06, I had to set a world record on the last run of the year. Now, when you’re looking out of your visor at your guys, that’s the only thing that can calm you. If I looked out my visor and saw my five high school friends, I’d shut the car off because not only was it impossible to win, but I’d have gotten killed. Those guys weren’t prepared for this. These guys are A plus all the time and I think we’ve learned those values from the Army guys. We’ve learned an incredible amount of values. Hard work. When I’m sitting in that car sweating thinking “Holy crap, I’m hot,” I look over a guy in uniform and I think I’m not really that hot. That guy was in Afghanistan two weeks ago getting shot at. I guess it’s perspective.

Montgomery: It sounds like it’s really helped your team focus, though.

Schumacher: As a man, it’s helped me. And I think whatever job you choose, you’re a better person for the people you surround yourself with.

Montgomery: I think the atmosphere at an NHRA event is wonderful. I know we usually see you at the ropes interacting with the fans. I think the accessibility is great. You don’t have this in NASCAR anymore. You had it 20 years ago, but not so much today.

Schumacher: You know all the fans back here… Jimmie Johnson will be here either Sunday or Monday hanging out with me. You announce all those guys and this place will be packed. NASCAR drivers are heroes because we’ve separated them from everybody else, as messed up as that sounds. You overpay someone and you make them a hero. Michael Schumacher makes 120 million a year. I want to meet the guy and I don’t even care what he drives. There’s a certain aura about these guys and we’ve built them into that. We try to keep it that we’re regular guys. It’s always been that way. When you go buy a car, they never tell you to go 80 and turn left. They say, “Step on it! You feel that power?” Drag racing. They’ve always done that. From the beginning of time, when there were two cars people drag raced. From the beginning of time. And we’ve tried to keep it that way. They let the people in because those are our fans. Those are the people that make this possible. We’re not here if they’re not here. Although I’d still race. I don’t care! Two people, two cars, battle on!