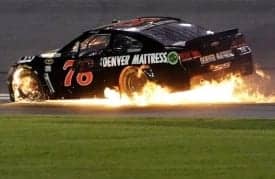 Martin Truex, Jr. was the obvious victim in the Richmond scandal of 2013, and has struggled to get back on his feet ever since.

Did You Notice?… This weekend marks the first Cup race at Richmond since last Fall’s Chase “cheating” controversy? It’s a perfect time for a “Where Are They Now?” addressing all sides of a scandal whose aftershocks still occasionally shake the sport.

The Spinner: Clint Bowyer Bowyer, who has never fully admitted to wrecking intentionally, seems to have gotten past the magnitude of the moment. If not for his No. 15 turning around on its own during the final laps at Richmond, we might not have a new playoff format, Michael Waltrip Racing would still be a fully-funded, three-car team and Chase Elliott’s ride of choice would be part-time, Hendrick-sponsored in Camping World Trucks. Think about that for a second as to how much of an earthquake the scandal really was.

I’d say it took about five months, until Daytona Speedweeks, for Bowyer to take a step forward. After 5-Hour Energy threatened to pull support, the PR strategy during the Chase was clearly to “lay low.” That’s changed dramatically come 2014, with Bowyer’s colorful exit from this Daytona 500, along with several on-camera stints onFOX. (No better way to fix your image when owner Michael Waltrip is an analyst there, right?) Bowyer’s personal life is also in order, as the driver married longtime fiancée Lorra Podsiadlo last week.

It’s the fan support of the driver, which could have risen to Brad Keselowski-like levels considering his independent streak, that’s taken a hit. It’s not the first time Bowyer’s been the focus of cheating, either. He lost 150 points in the fall of 2010 when an RCR chassis failed post-race inspection at Loudon. That incident, like last fall’s spin, cost him a shot at running for a championship. Two times in three years is enough to stick in most peoples’ minds.

On-track, Bowyer’s performance has suffered. He’s earned just two top-5 finishes in the eighteen races since, and has run no better than eighth all season. A once-promising stint with MWR, as a result, has now hit a crucial juncture. Can you endure this type of crisis without inevitably splitting up?

The Victim: Martin Truex, Jr. The man Bowyer spun for to earn that No. 56 team a spot in the Chase saw it stripped away instead, ruining what had been a career resurrection from MWR. It’s a gut-punch, straight to the chest from which the driver has yet to recover. Once sponsor NAPA bolted, openings were few and far between before Truex settled with single-car Furniture Row Racing. In doing so, he lost a crew chief, Chad Johnston, who rebuilt the driver’s confidence within the MWR program.

Martin Truex, Jr. was the obvious victim in the Richmond scandal of 2013, and has struggled to get back on his feet ever since.

Truex seems lost in his new digs, without a top-10 finish this season and struggling to 28th in season points. Paired with multi-car programs through his entire Cup career, getting thrown on an island with FRR has been a major adjustment. Getting put there against his will, settling instead of wanting, the opportunity could be playing a role as well. Truex is an example of how bad things sometimes happen to good people. But it’s how people recover from adversity that truly defines them.

The Would-Be Winner: Ryan NewmanNewman was on cruise control, set to win his second race of the season while defying the odds with a lame-duck ride at Stewart-Haas. The spin cost him that trip, and he’s been shut out of Victory Lane ever since. NASCAR threw him a Chase bid as a consolation prize, but he never did much with it, running 11th before jumping over to Richard Childress Racing. Newman, who was on his way out anyway, was preoccupied at the time with the press obsession over Kurt Busch’s jump to SHR mere weeks after Tony Stewart told Newman “there was no room at the inn.” He was the least affected, in theory, by the scandal and seems to be doing well at RCR. Earning three top-10 finishes so far in 2014, he’s cruised to ninth in series points.

The Would-Be Chaser: Jeff Gordon Gordon appeared to have earned a postseason bid before the Bowyer spin, then crazy pit stops took that opportunity away.NASCAR, of course took the unprecedented step of offering Gordon a 13th Chase bid. It’s the most debatable move in modern stock car history, a bending of the rules at “the discretion” of the sport’s CEO, Brian France.

It also might be the best coincidence to ever happen for a former champ whose stats had lost their luster. The fact Gordon needed a loophole, of sorts, to make the postseason seemed to give the one-time superstar a kick in the pants. He’s been on fire to prove his old mettle ever since, winning Martinsville last fall, jumping to sixth in the final standings and keeping the momentum rolling in 2014. Leading this year’s Sprint Cup points, with six top-10 finishes, the No. 24 team looks like a well-oiled machine. How ironic Gordon’s rivalry with Clint Bowyer remains red hot. Four-Time should be sending him a thank you card.

The Much Maligned Playoff Format Fans thought NASCAR’s Chase, which fell under heavy criticism, could somehow be given the axe. Instead, the sport settled on revamping the system, introducing the current format based on winning. The field was expanded from 12 to 16, reducing the pressure to “points race” at Richmond and minimizing the impact of team orders.

Will team orders, punished severely at Richmond last fall pop up again before the season is out?

Or has it? Once a driver reaches Victory Lane, under these Chase changes, they’re all but locked into the 16-driver field. So if a 2014 winner is running first, and his winless teammate sits second down the stretch, what’s stopping anyone from “slowing down” with mysterious handling problems late? Already, this issue has come up at Texas, where Penske’s Joey Logano pulled away from a “locked in Chase teammate” Brad Keselowski down the stretch. By the time we hit race number eighteen, these 1-2 teammate scenarios should be happening far more often.

Ratings, of course have also suffered, with seven of eight events in 2014 suffering audience declines. Whether that’s due to fans’ disgust on this issue is truly hard to gauge. But so far, it is fair to say this incident didn’t increase the popularity of NASCAR’s postseason format.

Supporting Cast Ty Norris, the Michael Waltrip Vice President charged, perhaps unfairly, with masterminding the “Spingate” scandal, was quietly reinstated byNASCAR in January. He remains in a role of Executive Vice President, although his spotting duties at the track have been stripped. Brian Vickers, who dropped like a rock late in that race to help Truex, has also remained with the team.

As for Michael Waltrip, along with co-owner Rob Kauffman, their race team has tried to rebuild. But while Vickers has shown flashes so far in 2014, it’s clear their equipment and speed now sit a step below where they were last September. No one’s calling MWR a title contender. No one’s seen the team in Victory Lane since this incident happened. The punishment doled out, which included a $300,000 fine, in truth cost them millions and a handful of top-tier employees. It’s far worse than the “jet fuel” incident in Daytona back in 2007 because of the loss of said personnel. You don’t build Rome in a day and you don’t build it back up that quickly after a collapse.

Meanwhile, NAPA has fared wonderfully since the incident, freeing them from those irritable Waltrip commercials and allowing Rick Hendrick to poach them on their way out the door. Now, they’re aligned with Chase Elliott, the 18-year-old son of Awesome Bill who’s already won himself two Nationwide races. That’s millions well spent elsewhere rather than leaving yourself as a punching bag, front and center.

As for NASCAR, their handling of the incident has faded into distant memory for those who stuck with the sport. But there’s a missing chunk of audience still, this April, which does suggest for those who don’t tune in there’s a sense of feeling “cheated” that still remains. No matter your position on the matter, the timing and detailed explanation of the punishment could have been handled far better than the end result.

Finally, as for Richmond, they’re simply looking to get a good, clean race under their belt on Saturday night. The sooner this incident is behind them, the better, but it could take a few good, clean falls here before that’s actually the case. Bad history has a way of sticking around…

– Wouldn’t it be great to see Daniel Suarez succeed? The Mexican native is making his Nationwide Series debut in Friday night’s Richmond event. With two K&N Pro Series East wins already this year, the young driver earned his one-race deal with Joe Gibbs Racing, a partnership he hopes to make the most of. NASCAR could use a little more foreign influence, as Australian-born Marcos Ambrose is the only “non-American” running full-time at the Cup level. The success of someone like Suarez could turn a whole new group of curious eyes towards a sport they may have never heard of…

– Jeffrey Earnhardt is getting sponsored by Perdue this weekend, the latest in a line of one-race deals that keeps the grandson of the Intimidator afloat. It’s amazing that, considering how long he’s been racing, no one’s been willing to take a full-season chance on the Earnhardt name. It’s also amazing, considering they’re relatives, JR Motorsports hasn’t extended a hand and at least taken a flyer on this guy for a few weeks to see what he can do.