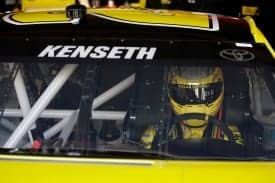 Matt Kenseth hasn’t come out swinging and winning this year like he did in 2013. However, the performance has picked up in recent weeks, making Richmond the perfect place for the No. 20 team’s first win of the season.

Down on your luck in fantasy this season? Never fear. With a weekend off and a chance to relax with family or friends, some time to (hopefully) sneak a look at your team when no one else is looking, Richmond may be a chance to get back into the game, so to speak.

If you’ve gotten off to a slow start (like me) and you’ve been a little down, don’t get too down. There are still 28 of these things left with Saturday night’s race next on the list.

And, of course, if you’re on the top end of the standings, you want to keep the momentum going, too. As I like to say, it’s always better to be ahead than behind.
So no matter what your position in the standings, here’s a look at who we like at the three-quarter mile oval in Virginia this week.

It may be a bit ironic, considering what happened at Richmond in the final race of Sprint Cup’s regular season last year, but Clint Bowyer is actually a legitimate pick here this week. Bowyer, who has yet to win a race this season, does have one win in his last four races at Richmond and has led a series-high 273 laps in those events. Bowyer also has one other top five and another top 10 in those races to post an average finish of 8.75, good for fourth best among active drivers.

Another winless driver this season who is capable of winning at any track is Matt Kenseth. He hasn’t won in the last four trips to Richmond, but he does have a top 5 and two other top-10 finishes for a series-best average finish of 7.25 during that span. Kenseth has also led 145 laps in those four races and his worst finish is 11th. Kenseth does have one career victory and 12 top-10 finishes in 28 career races at Richmond.

Matt Kenseth hasn’t come out swinging and winning this year like he did in 2013. However, the performance has picked up in recent weeks, making Richmond the perfect place for the No. 20 team’s first win of the season.

If you’re into the old karma thing (and I’m on record as saying I’m not) there isDale Earnhardt, Jr. The karma part is because one pace car crew member this week happens to be Robert Griffin III, the quarterback of Earnhardt’s favoriteNFL team, the Washington Redskins. But putting that aside, Earnhardt does have three career victories and 12 top-10 finishes overall in 29 races at Richmond. In the last four trips to that track, Junior has two top 10s with a top finish of second and a worst one of 14th.

A driver who has been strong all season, only to be foiled by mechanical issues at times, is Kevin Harvick. He has one win and another top 10 in his last four races at Richmond. He also has three career wins at the track with 16 top-10 finishes in 26 races. Harvick has also led 945 laps in those events, fourth most among active drivers. And, too, you have to give Harvick some kudos for his interview after that win at Darlington. The interviewer from the studio asked him a question about struggling so much this year, but Harvick quickly and politely pointed out that he hadn’t struggled to find speed — just to finish races. That may be the biggest question for him again Saturday night.

Well, one name sticks out here and that is Denny Hamlin. Richmond is considered the home track for Hamlin, who is originally from nearby Chesterfield. Hamlin’s numbers in his last three starts at Richmond are a bit skewed because last year, it was still clear that he was not 100 percent healthy from a back injury that he had suffered earlier in the season at California.

So, he has just a fourth place as his only top-10 finish in those races. However, for his career, Hamlin has two wins in 15 events and also nine overall top-10 finishes. Hamlin has led 1,390 career laps at Richmond, second most among active drivers behind Jeff Gordon’s 1,464. And since Hamlin is also looking for his first win of the year, you know he and his crew will have some extra motivation at his hometown track.

Denny Hamlin’s strong finish to 2013, along with his Daytona success ran out of steam about the same time he discovered rusty metal in his eyeball. With two career wins at Richmond, might this JGR driver be ready to turn his 2014 season around?

Richmond has also been a pretty good place for Tony Stewart. He has three career wins there and 19 top-10 finishes in 29 career races. Stewart also has led 950 laps in those events, third most among active drivers. Stewart, like Hamlin, is also winless this year, so if he’s got a chance to get into victory lane you know he’ll be going for it. And in his last three races at Richmond, Stewart has two top 5s and has led 133 laps for an average finish of 8.33, second best behind Kenseth.

One driver you can’t forget about here, too, is Carl Edwards. He has a win among his three top-10 finishes in the last four races at Richmond. Edwards has 252 laps in those races, the second most behind Bowyer. Edwards’ average finish is third best at 8.50 and his only non-top 10 finish was a 17th. Edwards also has 10 top 10s in 19 career races at Richmond.

One driver who is worth a look here and might be a bit under the radar is Ryan Newman. He has two top-10 finishes in the last four races at Richmond with a top finish of third and worst finish of 15th. Newman does have one career win in 24 races there and has 14 top 10s overall. Newman’s average career finish at Richmond is 11.42, sixth best among active drivers. And who can forget he was leading last fall, driving the No. 39 for Stewart-Haas Racing before late-race “disaster” struck with Bowyer’s spin?

Well, you’ve got the two obvious choices here in top rookies Kyle Larson and Austin Dillon. And as I’ve noted before, if you want good odds of getting a top-20 finish, then Dillon is usually the way to go here. But if you’re thinking maybe you can get a top 5, or risk maybe a 30th, then there is Larson, who has shown he has the ability to run up front. As I’ve said before, it’s just a matter of when, not if, he will win a race this season.

While Austin Dillon and Kyle Larson are typically the “go to” drivers for this group, Justin Allgaier’s Top 20 at Bristol points to him being a risk worth taking at this week’s short track.

A couple of other options here are Danica Patrick and Justin Allgaier.The question with Patrick is if she can stay on the lead lap early on, because the team does seem to get better as the race goes on. By better, now, I mean she could finish somewhere in the 20th-place range, so that’s not really going out on a limb. In her two Richmond starts last year, she was 29th and 30th, so you know, it’s hard to ignore the history here, too.

Then, there is Allgaier and the No. 51 team, one that has shown improvement throughout the season. So if you think this team is a top-20 finish possibility, then that could be an option too. His best result this season is a 17th at Bristol, so there is potential for him to run well on a short track.

The leader remained the same in the overall standings in the Frontstretch Fantasy League on Yahoo! as LeftTurnOnly has 2,207 points after nine races. Following not far behind are Mojothemonkey at 2,190, ShadowsPT at 2,188, Migrainehead’s Chargers at 2,184 and bundys bombers at 2,169.

The biggest standings jumpers of the week were C.Elliott 2014 Champ!!!! and Djarum Racing each jumping 15 spots. The top score at Darlington was miraculously turned in by Bomb Squad (that’s me) with 331 points. The winning combination at Darlington was Matt Kenseth in fourth, Greg Biffle in fifth, Kyle Larson in eighth and Denny Hamlin in 19th.