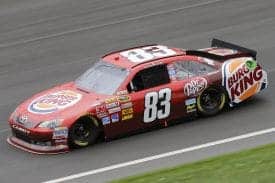 BK Racing has been around for several seasons now, strictly as a two-car operation. Will an expansion to three be too much to handle for a team still getting on its feet in NASCAR?

The perfect race track. That’s how the drivers of the NASCAR Sprint Cup Series are apt to describe the track that hosts this week’s round of racing action, Richmond International Raceway. Of course, the last Sprint Cup Series event at Richmond was decidedly not perfect, what with the cheating scandal and all. Of course, Spingate will be on the minds of many this weekend, but it still pales in comparison to the stories surrounding tonight’s actual race which in truth is shaping up to be a rather interesting one. The two other short track events of this season, Bristol and Martinsville, were absolute barnburners, and with plenty of competitive drivers still in the hunt for playoff-spot clinching wins, tonight’s race figures to be another buzzworthy affair. Let’s just hope its not a controversial affair.

1. Will the new-look BK Racing go the way of the Swan due to added financial pressures?

BK Racing has been around for several seasons now, strictly as a two-car operation. Will an expansion to three be too much to handle for a team still getting on its feet in NASCAR?

The big story over the off-week was the slow-burn disintegration of the Swan Racing operation. The Swan tea, which made lots of noise over the off-season for hiring two rookie drivers and vastly expanding its program, finally crumbled under its own weight in what would prove to be a sad indictment of just how hard it is to be successful both competitively and financially in theNASCAR of 2014. Ultimately, BK Racing stepped in and purchased most of the important assets from Swan Racing, including the entire #26 team with driver Cole Whitt, a bold purchase if there ever was one.

For anyone who pays close attention to the performance of some of the smaller team’s in the sport, BK’s purchase of the #26 team is perplexing. BK Racing has had a litany of financial issues of its own since setting up shop in 2012, including a nasty legal battle with former driver Landon Cassill over unpaid earnings (ouch). Now, you want to add a third full-time team to that mix, with a third rookie driver no less? The whole move seems dangerously audacious if you ask me.

Truth be told, the BK organization has performed admirably in 2014 compared to the team’s paltry setback-laden effort in 2013, but with the added financial pressure of a third team, will that progress be undone? The first clue towards answering that question will come tonight. If the BK Racing group as a whole perform markedly worse tonight than they usually do, it could be a rather portentous sign of negative things to come. My guess is that the organization has bitten off more than it can chew, and that the first sign of that will come tonight.

All told, BK Racing’s performance will certainly bear watching tonight, as tonight represents the beginning of a new chapter in the organization’s future.

I’m not privy to the inner-workings of the minds of Michael Waltrip Racing’s executive staff, but I’d hazard a guess that this has been a tough week for the organization.MWR was of course the main culprit in the infamous cheating scandal at the end of last September’s Richmond event, and no one in the sport has forgotten that fact. In the days and months since, MWR has suffered financial difficulties, personnel layoffs, and sagging on-track performance, all related to the crushing penalties levied against the team in mid-September.

While life has largely stabilized for the organization in recent months, the 2014 season hasn’t exactly been kind to the team on the track. The team’s two drivers, Brian Vickers and Clint Bowyer, sit a mediocre 13th and 16th in points heading into tonight’s race, and as a whole, the organization just doesn’t appear to be as strong as it’s traditional rivals at this stage of the season. No one is sounding the alarm bells just that, but the team has undoubtedly been sluggish thus far. All that being said, Vickers and Bowyer are both aces on short tracks in the vein of Richmond (Bowyer in particular is a two-time Richmond winner), and if there was ever a place where an MWR car would seem best positioned to deliver a win, Richmond would be it, oddly enough.

It certainly would not be a popular victory if an MWR car won, as the wounds of the cheating scandal still sting throughout the garage, but I think there’s a high possibility of such an outcome happening. If the team as a whole can, at the very least, step up and deliver solid runs tonight, it will signify that the team has largely moved on from last fall’s scandal. But if they languish in the mid-teens once again,MWR may have more work to do than previously thought.

3. Is another short-track thriller on the docket for tonight?

For better or worse, the quality of the on-track racing product is always going to be a major point of discussion in the NASCAR news cycle. Luckily, “the racing” has been in the news cycle for positive reasons in 2014, as just about every race this season has offered equal amounts of excitement and compelling storylines.

The short track events in particular have been very competitive, with the 2014 Bristol and Martinsville events standing as the best races at those two facilities in over a decade. Will Richmond, the third short track on the circuit, follow suit? I think it certainly has the potential to.

Tires ought to be more of a factor tonight than they were at both Martinsville and Bristol. Richmond’s surface is more abrasive than either of its short track companions, and as such you can once again expect tire management to play a large role in the outcome of the race, and that will of course lead to passing.

Couple all of that with a rookie-laden field and a hungry set of winless drivers, and it all adds up to a whole lot of potential excitement. Expect lots of frayed tempers, cautions, and perhaps even a bit of controversy after the checkered flag flies. This place does have a penchant for such things, after all.

4. Who figures to be the man (or woman) to beat tonight?

Short track races are oftentimes tough to predict, especially when tire wear becomes a big factor. With passing expected to be relatively easy tonight, and weather/track conditions expected to change drastically throughout the night, it’s tough to nail down one concrete favorite. Then factor in the wild-card nature of the track, what with it’s plentiful cautions and wrecks, and the best solution for making a pick is to look at history, and history points to Joe Gibbs Racing.

Indeed, the duo of Kyle Busch and Denny Hamlin has been lethal in recent years at Richmond, and I have little doubt that that trend won’t continue tonight. The two have combined to win six races at the facility since 2009. Kevin Harvick, while not aJGR driver, has been money here recently as well, winning two races since 2011, including last year’s Spring race.

All told, however, I think this is JGR’s week to shine. Denny Hamlin has been mighty quiet as of late, and this would seem to be a perfect track for him to come out of nowhere and steal a win. Watch out for him and Kyle Busch tonight.