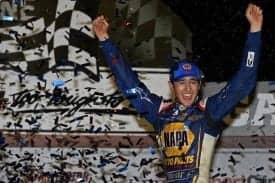 While Chase Elliott has set the Nationwide Series on its ear the past few weeks, the rest of the season has been dominated by Sprint Cup interlopers.

A cursory glance at the current point standings in the NASCAR Nationwide Series entering the season’s eighth race reveals one thing: there’s not a whole lot of diversity at the front of the field when it comes to series regulars.

Ever since NASCAR mandated that drivers could only declare for points in one of the three national series, the top of the standings has presented a clearer picture of who’s the best of those actually completely devoted to each one, rather than racers who are jumping fluidly in between circuits. In the Nationwide Series in particular, the Sprint Cup Series drivers coming down to cherry-pick are placed at the bottom, having received no points per race.

When taking those drivers out of the equation points-wise, it’s easy to see the best and worst of the Nationwide Series. And honestly, there’s not very many in the former category right now.

In fact, in terms of top 10s, only the first eight drivers in the standings even have any at all — and of those, two only have one. Comparatively, in the Cup Series, the first 26 drivers in points have at least one top-10 finish.

That’s a bit of an unfair comparison, since there are more drivers running for points in the series, but eight versus 26 is still a harrowing jump. If anything, it only furthers the notion that the discrepancy between the haves and the “have nots” is increasing at a rapid rate.

While Chase Elliott has set the Nationwide Series on its ear the past few weeks, the rest of the season has been dominated by Sprint Cup interlopers.

Two additional drivers — Chris Buescher of Roush Fenway and Ryan Sieg of his family-owned RSS Racing — have also scored top-10 finishes among those who have declared for Nationwide points. That’s it. No one else.

Add to that a few teams — like Gibbs’ No. 20 and No. 54, along with JR’s No. 5 — that are full time but without full-time series drivers and there’s really a small amount, just barely over 10, that are even seemingly in contention for the top 10 week in and week out.

Already, the mere eight drivers in the top 10 in points with a top-10 finish are less than this point last season. After race seven, each of the top 10 had scored one, with the 11th-place driver owning one as well. In all, 17 points-scoring drivers had a top 10 by then, a far cry from the struggles of 2014.

The craziest thing is, looking forward there’s not really too many drivers who seem like they could add their name to the list. There’s Ryan Reed for Roush Fenway, whose troubles have been well-documented, but he’ll be sure to get a top 10 eventually. James Buescher is also nearby, sitting ninth in points, and his RAB Racing team generally scores a few top 10s throughout the year.

But beyond that, the field is full of the have-nots, teams like TriStar Motorsports who can sometimes rattle off a top 10 but are generally mid-pack, and shoestring budget organizations like Jimmy Means’ No. 52 team simply filling out the field. We’re talking cars that won’t be sniffing even the top 20 on many occasions, save for anomalies like restrictor plate surprises.

Obviously, there could always be a light at the end of the tunnel, and more drivers will almost certainly grab top 10s before the season is over. Regardless, the point remains clear: when only eight drivers in the top 10 in points have even found much success at all in the season’s first seven races, does that present a bit of a problem?

The answer is yes, and that’s the sad state of the Nationwide Series right now. There may be some hot, young rising stars in this division, which is certainly exciting. But there’s another side to the coin, an ugly one and it’s only getting worse.