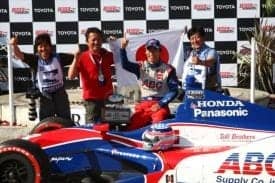 Takuma Sato, like any racer, has had his shares of ups and downs. Here’s one of his brighter moments: his first career IndyCar Series win at the Long Beach Grand Prix.

When drivers hit the track to race, all eyes are on them, pressure falling straight on their back to do well. However, the weight of those eyes, along with the number makes it far more difficult for some to handle. That could be said for Takuma Sato, IndyCar’s Asian import as many are curious about how the Japanese driver will do with the testy A.J. Foyt as his car owner.

While there may be added pressure, though Sato says that having Foyt as a boss brings a lot of positives.

“Obviously, he’s an iconic legend,” Sato said, now in his second full season with the team. “It’s great to have A.J. Foyt as the boss since he has a lot of experience, passion and he makes me better. He has been building a great environment with his experience [and has] good equipment.”

Beyond that knowledge, a history of winning results which helps the team grow Sato says that it’s simply fun to be around him. With Foyt, you often hear the history involved with one of the sport’s most legendary drivers.

“There’s a lot of stories from his racing days that are unbelievable,” he commented. “To share one story, there’s so many great ones. We have a lot of chats and he always has good stories that are interesting.”

Takuma Sato, like any racer, has had his shares of ups and downs. Here’s one of his brighter moments: his first career IndyCar Series win at the Long Beach Grand Prix.

So far, Foyt’s approach as an owner and Sato’s driving have paid off as the pair have had some success together. Sato had a great start to last season, scoring his first ever IndyCar Series win in the second race of the year at Long Beach. Sato was able to put together four top-10 finishes to start 2013, briefly leading the points before things fell off a little in the second half as a result of both mechanical issues and some on-track incidents.

Sato says the experience last season taught him a lot of things that he knows he can take with him into 2014. While the team had a lot of speed at the beginning of the year, he noted their program hit a plateau while others around them simply kept going.

“In racing, there’s a lot of things that are evolving so we lost some speed over the year to drivers and teams,” he expressed. “We learned a lot of things in what we were strong at and where we needed to get better. We weren’t at the top last year; but this year, we can only be stronger.”

So far, Sato hasn’t gotten off to as promising of a start as he would’ve hoped. A potential title contender entering this year, those lofty expectations have yet to be realized as Foyt’s team still appears a step below the gigantic organizations run by Chip Ganassi, Roger Penske, and Michael Andretti.

“A little mixture of feelings,” Sato says of those on-track results. “At St. Pete, I got the pole in qualifying which was a fantastic start to the season. Then, the race was tough.”

Sato would finish seventh, a solid run, but not as strong as he was hoping for. Even so, disappointment in a top-10 finish is a position many lesser teams would like to see themselves in.

“Actually, being disappointed means we have high expectations,” Sato explained. “And that we feel we can be really strong in results. So, it’s a positive.”

Sato had a decent race going at Long Beach, running in position for a top-10 result when he was taken out of the race after getting involved in a late, multiple car accident. Despite the disappointing start, Sato says that the team is still upbeat based on the speed that they have shown so far.

The hopes of turning their season around will depend on what happens at Barber Motorsports Park, which is a track where Sato hasn’t had the best results. His best finish in four starts is the 14th-place performance he earned last year; however, that hasn’t dampened the driver’s spirits towards the course itself.

“I love Barber Motorsports Park. It’s a great facility to race,” Sato commented. “We had a good winter test in Barber so I’m really looking forward to Barber for the race. It should bring a good performance.”

While it marks the third road/street course event this season for the IndyCar Series, Sato notes the street courses of St. Petersburg and Long Beach and how they vary from the Barber road course.

“The street and road courses are quite a bit different,” he commented. “Street courses are very bumpy, a combo of asphalt and concrete and a lot of 90 degree corners. It takes a very different technique in setting up the car. Barber Motorsports Park is a lot more smoother and a lot of high speed corners. We have a lot of challenge driving.”

While many drivers got involved in racing at a young age, Sato’s interest for motorsports didn’t really take off until after he saw a Formula 1 race in Japan when he was 10 years old. Though he was interested in racing, he was unable to compete because there were no opportunities available at the time.

“All I had was a bicycle and I enjoyed cycling and went to a lot of competitions,” he said. “Then, when I turned 20 years old, I had the opportunity to go to the racing school. I got the scholarship and then I could start my racing career. My parents didn’t have the budget to do it, so I really needed that scholarship. Then, I was able to start racing and go to the UK.”

From there, Sato climbed his way through the ranks, landing a ride in the IndyCar Series in 2010 with KV Racing. As Sato has continued to climb the racing ladder ever since, becoming stronger as a driver, he earned fans that now follow him each week, especially those from his home country of Japan.

“I appreciate all the fans for their support,” he said. “There’s a lot of fans all over the world, but especially in Japan, they follow me very close. Last week at Long Beach, there were a lot of Japanese fans that came over to watch so we had the fan club tour. We had a good time. I really appreciate all the fans and the support and as a sport, we need the fans to keep doing what they do and always be thankful to them to be in this position.”

To those looking to follow in his footsteps, Sato’s advice is simple – believe in yourself.

“There’s a lot to hard work and it’s all about having the right chance at the right time, so you have to keep working hard out on track,” he added. “For the racing, it’s a very complicated sport as you need a good team around you and a lot of support – engineers and sponsors. It’s a very tough business but if you have a passion, you should go for it.

“A lot of drivers started karting at very young age and I started when I was 20 years old because I didn’t have the opportunity. You can still make it. You got to believe and work really hard to make your dreams come true and not give up.”