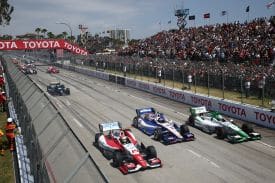 Long Beach generated some hard racing amongst Ryan Hunter-Reay and Josef NewGarden. But did Hunter-Reay take things too far?

Welcome to the IndyCar Round Table! Several times throughout the season, your favorite writers will get together to discuss the latest IndyCar news, rumors and so much more!

Toni: First thing I think we should discuss is the Long Beach race. There’s a couple aspects that come to mind: Hunter-Reay’s move and the criticism of it, Mike Conway winning already in Carpenter’s car and what a great arrangement that may turn out to be, the great crowd on hand, or the fact that they’ve locked the event in until 2018.
Matt: Let’s focus on the criticism of the move. That’s a big one.
Huston: Let it rip.
Toni: Personally, I think if you are Hunter-Reay, you understand that your best chance to get by this guy in front of you is going to be while he’s got cold tires and can’t really defend to the extent that he can once he gets warmed up. I think that’s thing number one and I think that’s Hunter-Reay’s thought process, to some extent. I also think he’s thinking, at that particular point, he’s clearly got the faster car and if he can get the nose in there, surely Newgarden will give him the line.

Long Beach generated some hard racing amongst Ryan Hunter-Reay and Josef NewGarden. But did Hunter-Reay take things too far?