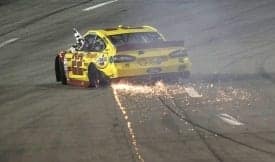 Once floundering in the Cup series, Logano has matured into a legitimate driver – and is now legal to drink the Victory champagne on top of it.

Who needs a green-white-checkered for some close racing at the finish? The Sprint Cup drivers proved they could keep their cars pointed in the right direction during a breath-taking nine laps of green-flag competition that concluded Saturday night’s Toyota Owners 400 at Richmond. No one could have been thinking about a manipulated outcome, as the drivers took care of any doubt of that on the racetrack.

Two- and three-wide jockeying for position took place throughout the field, and every position was a hard-nosed battle at some point during those remaining circuits around the 3/4-mile short track. Things didn’t end after the race, either as some altercations erupted outside of the cars. The debates ranged between drivers fighting for the lead and a literal fight among two going for positions in the ‘teens; no one was immune to a seemingly short fuse. After some of last year’s unusual circumstances at the spring and fall Richmond races, one could have wondered how those events would be topped. That uncertainty was answered, in no uncertain terms by fantastic competition.

Many factors contributed to such a near picture-perfect evening. It started immediately from the drop of the green flag when front-row starters Kyle Larson andClint Bowyer got together, sending Larson around in front of the entire field. In what has become the norm the last several weeks, a tire supplied by Goodyear played into the outcome. Drivers had to do their absolute best to manage what they had, and teams could not go too aggressive on the setup. After all, we saw what happened when they did. The frequency of fires during tire issues needs to be revisited and luckily, everyone escaped possible injury in a situation like that. But who knew that a strange occurrence such as this one would top the sprinkler incident of last April?

And how about Joey Logano really coming into his own with two victories in 2014 already? Logano has been continuously criticized upon entrance into the Cup Series after immediate success in every other level of racing, ever since a Bandolero national championship in 1999 at the age of nine. Now, the still-young man is finally silencing critics with his stellar performance on the track. What better way to do it than conserving his equipment and by muscling his way past three former series champions in the closing laps?

Once floundering in the Cup series, Logano has matured into a legitimate driver – and is now legal to drink the Victory champagne on top of it.

The most important part was that the racing product has overshadowed controversy. Hopefully, it will once again come September, unlike last year with the entire Chase incident and adjustments afterward due to events near the end of last September’s race. The battle on the track is of utmost importance and is what fans travel and tune in to see. The points championship, no matter how it is formatted, pales in comparison when it comes to gaining a following on race day itself.

After the short track events, it is somewhat bittersweet that the Cup Series won’t race at another one until Bristol in August. Perhaps the voice of the fans will help make for an addition of a track like Iowa to a future season schedule. It remains to be seen. What this type of racing should do, at the very least is increase the attendance for future races, no matter the track configuration. Will we see similar action at the intermediate ovals of Kansas and Charlotte coming up? Maybe not as much, but to see what uncertain outcome will happen next fans will have to tune in and attend. The racing couldn’t have gotten much better.

Results like Richmond will certainly encourage positive questions in someone’s head. It worked for Auto Club Speedway in March. The weekend following the unusual Bristol event and finish, the California facility had its first grandstand ticket sellout since 2003. Much of it was attributed to arguably the best race there ever the year before, but the close-quartered short track racing the week prior had to contribute as well. Races like we have seen in 2014 are putting NASCAR fresh on people’s minds. Unfortunately, television ratings have been remaining stagnant at best with the public looking at participating in other activities when not attending a race. The main focus has to be to do what it takes to get folks to spend a part of their busy day-to-day lives visiting the track itself for the event. That’ll get them hooked to follow up and watch on TV the following week once the stock cars scoot right out of town.

With the events that have occurred so far in 2014 and drivers doing what it takes to not only win, but get that next best-finishing position, it appears the on-track product is working. Will it continue? You best pay attention!