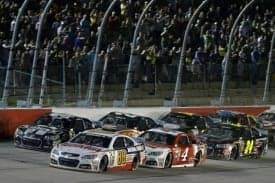 Despite some issues with weather and the necessity of certain caution periods, the racing has been solid in 2014.

Welcome to the Frontstretch Five, a brand-new column for 2014! Each week, Amy Henderson takes a look at the racing, the drivers, and the storylines that drive NASCARand produces a list of five people, places, things, and ideas that define the current state of our sport. In the latest edition, Amy has five surprises to smile about in 2014 so far.

1. The racing has been really good.

Yes, some people are going to complain about the competition unless every finish is door-to-door and decided by a hundredth of a second. Yes, there have been too many questionable cautions. But really, the racing in NASCAR has been very good in 2014, especially if you strip away the hype of the Chase, the championship, and the insistence of the television media in showing a few drivers while ignoring the majority of the field.

Despite some issues with weather and the necessity of certain caution periods, the racing has been solid in 2014.

There have been races where one driver has dominated, as Kevin Harvick did in Darlington, and those are a little bit special because it’s not easy to keep a step ahead of the competition for that many miles. There have been others where different drivers were strong as the day wore on. Those are fun because it’s hard to pick who will get it right when it counts. There have been different winners, seven in total and none of them has the name Johnson. There’s been Daytona drama and the wrench the rain throws in the works. There has been a little bit of everything, and the races have been entertaining.

It’s easy to look at the “good old days” through rose-colored glasses, and yes, there were some things about NASCARa decade or two or more ago that were truly special and may never come around again. But there were also some real clunkers. In fact, there were often some giantsnoozers with one or two drivers finishing on the lead lap. The majority of races, you notice aren’t shown in the highlight reels of yesteryear, reminding us how easy it is to look through rose-colored glasses.

So, while it’s not perfect, the racing in NASCAR this season is headed in the right direction. The hype over the Chase is misplaced, and the media’s insistence on following only a few competitors is shortsighted. But underneath it all, better races are brewing.

2. Seven winners in eight races, with a few twists.

It’s always good to see several different drivers taking a turn in the winner’s circle, and this year has given us seven in the first eight weeks. That’s good for the sport, because the more drivers who are winning, the more fans who feel like they’re getting some bang for their buck watching their favorites cross the line first. On a historical level, a dominant season by one or two drivers is something special. But to many fans, in the here and now, it’s a turnoff.

Add to that number of winners a few surprises, and the final equation makes 2014 stand out more. Last year’s big winners, Matt Kenseth and Jimmie Johnson, have yet to make an appearance in Victory Lane. Meanwhile, Kurt Busch made it back there after going winless for the last two seasons, bouncing around among smaller teams as he struggled to regain the respect of car owners after a series of issues. Those peaked in late 2011, but still included a one-race suspension by NASCAR in 2012 and some much-publicized berating of his crews on the radio ever since. Joey Logano, on the other end of the spectrum also appears to finally be living up to the hype at age 23.

The mix of winners makes watching the races fun — there are no foregone conclusions when nobody’s dominating, and the “win and in” Chase speculation fuels the fire. Could Johnson, the only driver to have made each and every Chase, be on the outside looking in after Richmond? What about points leader Jeff Gordon — can he find Victory Lane and add to the win total that’s already highest among active drivers? The more parity in the winner’s circle, the more conversations fans will get to have. And that makes the game more enjoyable for those fans.

It’s been a tough week on the back side of the Cup garage as Swan Racing announced a restructuring in a last-ditch effort to stay afloat. But while the small teams continue to fight for crumbs, a few are slowly making some inroads. The step forward that Furniture Row Racing made last year after forming a solid technical alliance with Richard Childress Racing is well-documented, and RCR added two more teams to the fold this year. Tapped for a partnership were JTG-Daugherty Racing and Germain Racing, both single-car teams who had been steadily improving but had about topped out in terms of where they could go alone. So far, the RCR alliance is paying off. AJ Allmendinger is 19th in points with a top-10 finish, ahead of some bigger teams who have been around longer. His average finish has improved by more than two positions over 2013 already. Germain’s Casey Mears got off to a hot start, finishing tenth in Daytona, and sits 21st in points despite some bad luck. That’s ahead of the likes of Kevin Harvick and Kasey Kahne, driving for some of the biggest programs in the sport. Mears’ average finish is also four spots better than 2013.

Teams without alliances are also making steps in the right direction. Landon Cassill has gotten some media attention for his Circle Sport team since he finished 12th in Daytona. Phil Parsons’ operation has completed every race this year — already more than they did in 2013, when they started and parked the majority of the time.

Could we see a small team in Victory Lane this year? They’re still long shots, but it could happen. Allmendinger is strong on road courses—he ran two Nationwide Series road course races in 2013 and won them both. Mears is an outstanding restrictor-plate driver, so both have an outside chance of recreating the feel-good story that David Ragan spun last year with his Talladega win. Odds are against it, but it could happen.

When the season began, it made sense that Austin Dillon was the favorite for Rookie of the Year honors. After all, Dillon is the reigning Nationwide Series Champion, in the best equipment that Richard Childress Racing can give him — equipment that’s contended for Cup titles. His closest competitors, Kyle Larson and Justin Allgaier, were driving for Chip Ganassi and HScott Motorsports, respectively — an organization that has needed to regroup to regain top-tier recognition paired with one that has never had elite status.

But then the racing started, and Larson has made it clear that he’s not interested in preseason prognosticating. Leading the rookie standings by 13 points over Dillon, Larson has all but silenced those who questioned Ganassi for bringing him into the Cup ranks so soon. Larson has grabbed two top 5s and four top 10s in just eight races this year, including a second-place run in Fontana. He’s 14th in points and in a position where he could make the Chase on points, depending on the number of race winners.

Dillon’s statistics certainly aren’t bad, by comparison. He’s tenth in points and has a top-10 result. But Larson has been the bigger threat to win a race, and despite some bad luck, he’s able to run with just about anyone. Money might buy speed, and while Dillon certainly has money, Larson’s innate talent is what’s making him stand out this year.

While there haven’t been any huge, Earth-shattering sponsor deals done this year, there has been some movement, and sponsors appear to finally be finding some value in the smaller teams. Just this week, Penske Racing, Circle Sport, and Germain Racing have new sponsors on board. Brad Keselowski’s No. 2 will sport Detroit Genuine Parts’ colors in Richmond. David Stremme will have Newtown Building Supplies on the No. 33, and Take 5 joins Casey Mears and the No. 13 as an associate sponsor.

Whether a financial backer is for one race or several, full or associate, new companies coming to the table is an encouraging sign, and that they’re doing it across the board, from an elite team to the smallest, bodes well. Even thoughNASCAR has seen a slip in popularity, there is still value in advertising in the sport. Race fans are known for brand loyalty to sponsors and their products or services, so putting a new name on the side of a car is good for everyone, and that’s been on the rise this year. This trend is one that needs to continue if the sport is going to thrive and grow.