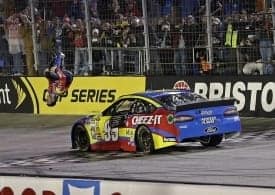 Carl Edwards win at Bristol has him in The Chase, but Roush Fenway’s speedway sluggishness could conspire to make him irrelevant — and a potential first-round exit.

Yes, this Thursday perhaps no driver needs good luck more than Parker Kligerman,out of a ride for now as Swan Racing restructured in a way that keeps him off the track. The rookie’s bad luck continues, a rough start that’s left him 38th in driver points and wondering if a mid-level ride in the Nationwide Series might have been the right path after all.

But he’s not the only one looking for redemption these days. Heading to Richmond, three stand out as needing a boost in order to get their 2014 seasons kickstarted.

Carl Edwards – He’s perhaps the most glaring question mark among the Roush Fenway contingent, despite his Bristol win that likely garnered him a place at the Chase table in September. The Roush Fenway Fords simply have not been that fast this season, with the exception of Greg Biffle’s Texas run, and a couple of pit strategy calls that turned the Nos. 16 and 99 into top-10 contenders at Darlington and Las Vegas.

Yes, I have railed often and publicly the last few years how the Roush camp has been a shadow of their former selves at the intermediate downforce tracks. Those places, from Michigan to Fontana were once the hallmark of their organization. That said, the No. 99 looked the part at Bristol, and won the last race at Richmond in September of 2013. A strong run wouldn’t cure the high-banked blues for Edwards, Jimmy Fennig and company; however, it would stop the bleeding and loss of momentum that they’ve experienced since their Bristol triumph.

Carl Edwards win at Bristol has him in The Chase, but Roush Fenway’s speedway sluggishness could conspire to make him irrelevant — and a potential first-round exit.

Other than a 10th-place finish in Fontana, they’ve ran 13th, 14th, and 13th ever since. That’s not exactly championship form, and there is no way they’re testing new stuff, either. If they are — well, it isn’t working. It wasn’t until halfway through the Southern 500 at Darlington this team finally figured out the car was so loose because of a simple quirk: they were literally bouncing off the asphalt with their front splitter. So not only does speed need to pick up, but problem solving and communication as well, if they wish to be in position to challenge for the championship this year. Or win a race at a track over a mile in length… or have Edwards, a pending free agent, renew his contract with the organization.

Despite the lack of speed and recent problems, what’s the best part of the story for Carl? He’s still third in points, 19 out of first. To say the new Chase format has everybody and everything in topsy-turvy world would be a bit of an understatement.

In 2009, with new team rules trimming car owner’s maximum number of cars from five to four, Jamie McMurray appeared to be the odd-man out at Roush Fenway Racing. That was true, but he nailed a win at Talladega, the diamond in the rough on a resume that likely needed a boost. He was an 11th-hour pickup by Ganassi Racing in 2010, and came through with a career year, winning the Daytona 500, Brickyard 400, and at Charlotte while nearly taking the Coca-Cola 600 and Southern 500 in the process, finishing second in both.

Ever since, McMurray’s been well off the radar screen. Things weren’t going so swell in 2013, either though Earnhardt Ganassi Racing showed flashes of brilliance. There was a pole at Sonoma and a second at Kentucky, but not much to crow about other than that. A win at Talladega in the fall salvaged what had been a mostly miserable season.

Enter 2014, and the landscape looks decidedly different than in years past.

JPM is gone, Kyle Larson is in, and Jamie McMurray might be hearing footsteps once again. Chip Ganassi Racing (with special guest, Felix Sebates) has stepped their game up a bit early in the going; a 10th a Phoenix and sixth at Fontana for McMurray, for example. However, it’s teammate Kyle Larson who is all the rage, nearly pulling one off in the final moments at Fontana. While McMurray is in 20th place in points and Larson 15th, it might not appear their performance is that disparate – except that it is.

Ever since Bristol, Larson and crew chief Chris Heroy (former Hendrick Motorsports engineering wizard) have been hitting on combinations that work, and they are quickly gaining momentum: tenth, second, fifth, and eighth in the last five races. Their first trip to Martinsville together didn’t turn out so hot, earning a 27th, but that’s the only blemish on what has been a pretty stellar rookie record. This performance, however, only highlights McMurray’s need to get going, and fast. The cars clearly have potential if a rookie driver with less than ten Cup starts is already racking up top 10s with regularity.

Jamie McMurray needs more 2010 heroics — and less 2014 sob stories like this one at Bristol in March. His rookie teammate has found some speed; now, it’s time for the 12-year veteran to follow suit.

McMurray also has a need to exorcise the demons of Chases past. It would serve as a huge confidence booster for Jamie Mac if he were to win at Richmond. Recall back in 2004, a ninth-place finish there still left him 15 points shy of Chase contention, while in 2005 he was in the Chase field entering the race. A crash then relegated him to a 40th-place run, knocking him from the postseason while driving then-Chip Ganassi’s No. 42.

That was as close as McMurray’s ever come to qualifying for title contention, even during his three-win campaign of 2010. One would think that needs to change after over a decade of driving quality rides within this sport.

Denny Hamlin – If there is one driver who seriously needs something good to happen – and now – it’s Denny Hamlin. The season got off on a high note, just as 2013 had ended; a win in the Sprint Unlimited and Gatorade Duel, followed by a runner-up finish in the Daytona 500. But ever since then, the bottom has fallen out of Hamlin’s FedEx box, and there’s no tape to be found.

A pole at Bristol and sixth-place result have been the only bragging point so far since then, despite having suffered the ignominy of having to pull out of Fontana with a rusty eye. Hamlin showed up full of piss and vinegar a week later, challenging anybody who would accuse him of any improprieties, and then called his shot: a win at Martinsville. Given his record of four wins and qualifying on the front row for the race, it seemed like a great finish to what had been a miserable couple of weeks.

Denny Hamlin’s focus at this point in the year needs to not be looking forward to The Chase — but the weekend at hand and the race. Hamlin runs well at Richmond, having won there twice; a week off may have done the team and driver some good.

What resulted instead was a 19th-place run, which would serve as a bookend for the same finish at Darlington, with a 13th at Texas in the middle. Texas was a heartbreaker, Hamlin having led 20 laps only to get caught speeding on a pit stop, busted when there really wasn’t even anyone near him. With the last eight weeks in the rear-view, and Joe Gibbs Racing as a whole having run solid – but not yet quite ready to win, this weekend would be the perfect setting for Hamlin to get things turned around.

After all he has two wins, two poles, and seven top 5s at RIR, with an average finish of 8.9. Despite rumblings surrounding TRD’s possible power deficiency on the large tracks, that’s less of an issue at a place like Richmond, where handling and avoiding getting caught on a yellow flag while pitting is of greater concern.

Denny Hamlin has essentially two hometown races a year; Martinsville and Richmond. Martinsville didn’t end how he had hoped, but after a week off to regroup, Richmond this time around might pay off for a man hoping to salvage both a season and his championship aspirations.