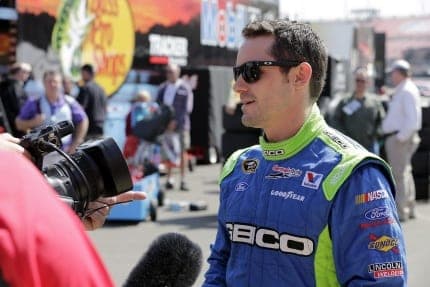 Last week, I wrote about stupidity in advertisement and how multitudes of commercials are, or at least should be, an insult to your intelligence. If you disagree, well, you should probably stop reading this column now because it’s definitely not going to be for you.

Now, my editors will probably not let my original title stand and will probably replace the letter “P” with a “W” but when I started this writing gig, I was applauded for my edginess. Even though it caused them a lot of heartburn and loss of hair, it was never discouraged. Let’s hope that is still the case. After all, this piece will be nowhere near the most controversial thing I’ve ever written — but enough twaddle, let’s get into it.

In the case of Mears versus Ambrose…

I am already sick to the teeth of reading various reporters and bloggers crying that either one should receive discipline by NASCAR for their little dust up after the race. Anyone, whether it be from this site or any other, who writes about this incident in such a fashion as to imply that Mears didn’t get exactly what he deserved, that Ambrose sucker-punched him, or that this argument is an “action detrimental to stock car racing” is nothing but a tree-hugging, ultra-liberal, common-core-supporting, participation ribbon-giving pussy. (Editors: See? We reached a compromise!)

That is just my opinion, of course. Know that my pappy always said — well, he said a lot of things — but my pappy always said, “If you mess with the bull, you’re gonna get the horns!” Perhaps Mears’ pappy said that too, but if he did, the driver of the No. 13 was definitely not prepared for the horns Saturday night.

If you are in an argument with someone and you escalate it, forcefully shoving the other principal in a non-loving, “I’m not playing” type of way, you best be prepared for further escalation by the pushed; that is just common sense.NASCAR is still a manly, testosterone-driven sport, is it not? Isn’t that what racing is all about? Just because there are a couple of girls in it now doesn’t mean that boys won’t still be boys.

No, I don’t go around promoting gratuitous violence; that is just as stupid as not expecting to get punched if you accost another human in a threatening way. But it is, after all, a fight that put this sport on the national television map back in 1979 — a fight that made this one look like a couple of school girls (exception: Ambrose) going at it. It’s a fight that, I suspect, most of these pussies writing about the one now were not even around to see, let alone remember.

Bring in the suits!

Since we’re talking about these types of people, the following are two examples, in black and white, of what is wrong with NASCAR today. First: Joyce Julius, in their quarterly look at who has gotten the most television exposure have listed Jimmie Johnson as getting the most television on-screen time for his sponsors. Despite sitting eighth in points, he’s number one in coverage while two-time winner Kevin Harvick sits in second place. Never fear, though, Harvick fans! While Johnson’s sponsors appeared for 11 hours, 11 minutes, and 40 seconds in 2014 Harvick nearly doubled his “teammate” with twice as many brand mentions in order to catch his own sponsors up on airtime. The verbal references on his backers have reached 73 through the first eight events.

Imagine, the suits in Daytona still can’t figure out why ratings continue to be at all-time lows! Perhaps I should have included this piece in last week’s article.

Speaking of those Daytona suits, here is a gem to close out with. NASCAR, according to an article from USA Today has no plans to add more SAFER Barriers to its tracks at this time. The response follows some pointed criticism, including from driver Denny Hamlin last month there should be a SAFER Barrier anywhere on the track there’s a wall the drivers can hit.

France, though respectfully disagrees despite admitting the new Chase format causes drivers to take “more risks” and, in theory put themselves directly in harm’s way. Even though two weeks prior, Dale Earnhardt, Jr. slammed the wall at Texas at a place without additional SAFER protection more safety, according to France does have monetary bounds. “There are parts of the track that we may determine aren’t necessary for those walls,” he claimed in the article. “We’ll do it wherever it’s appropriate. Period. We already have. We’ve been clear about that. We don’t think it’s necessary, as an example, to do it on pit lane, because they’re not running fast enough and it wouldn’t make any sense to do that, so wherever it’s appropriate, we’ll do it.”

Now, if that logic and reason doesn’t boggle your mind, you… you… aw, never mind. Anyone who would think that man is sane quit reading this column way back when I told them to.

Stay off the wall (unless you determine it is necessary),