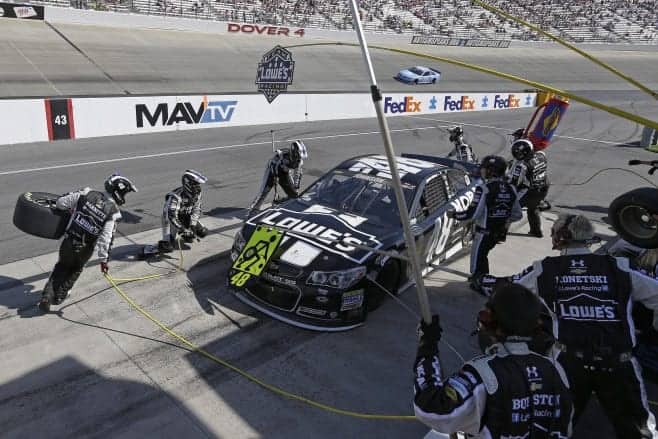 It might be an aging star trying to hang on one more year, a rookie looking for a break, a quiet contender racing his way from the back of the pack, an underfunded team making weekly gains.

It might be a thrilling battle that’s waged lap after lap or a lightning-quick pass for position, a tap of a bumper or a slide job gone wrong.

There is so much to see, to follow, to digest over the course of a single race that every viewer takes away something different — unless, of course, you’re watching the race on TV. In that case, every viewer sees pretty much the same thing. Every week. All season long.

Some broadcasts do a better job than others, but for the many fans who only get to experience racing from their homes, well, it’s no wonder that so many think it’s boring. Over the years, racing on television has increasingly become a show of what the networks think fans want to see — and if what they show isn’t what fans want to see, problems arise.

It seems as though lately, the broadcasts have been in the business of telling fans what they want to see or need to know. It’s all about a few big names, a few cars at the front of the pack, a few recycled stories. No, really, Joe Fan, you want to watch Jimmie Johnson today. You can have a little Danica Patrick for good measure, and of course you’ll want to see a lot of Tony Stewart, Kyle Busch and Dale Earnhardt, Jr., too. So, here they are!

To go along with them, you’ll be wanting an explanation of tight and loose, a little bit of Gen-6 101 — and what would your race be without a heaping portion of who’s in the Chase if it started right now?

To wrap it all up, you can have a canned victory lane interview, a few bland words with the top 5 (or a couple other guys we should want to talk about) and another points rundown with a twist of Chase.

Imagine if you went to a restaurant that everyone was raving about, only to have your waiter snatch the menu out of your hands and tell you that your favorite meal is spaghetti and meatballs and that’s what you’ll be having today. And every time you venture back to try it again, more spaghetti and meatballs.

“But I kind of wanted the chicken,” you tell the waiter.

Chances are you wouldn’t give that restaurant many chances to serve you some chicken before you moved on to something else. So, is it any wonder that race fans are doing the same thing after being offered a limited, uninspired menu week after week, year after year? Of course not. Yet the networks continue to dumb down the race broadcasts by showing only the action at the front, talking mostly of a select group of drivers, limiting the storylines fans see.

Do the networks think fans are incapable of watching a race, taking in all the action among all the drivers, and making an informed decision about what they liked and didn’t like? Apparently they do.

A few years ago, when ESPN rejoined the sport after several years’ absence, it was to much anticipation from fans who remembered the way the network had covered the sport in the pre-FOX days, with wide camera angles designed to show what was going on throughout the field, announcers who knew their responsibility was to bring fans the show and not to be the show, coverage of fierce battles for position, even if it was for 15th place. It brought you the race in a way that made you feel like you knew the drivers personally. Fans cared because they had something to care about.

But when ESPN returned, it was not the same. Tight shots of one or two cars replaced the angles that showed racing in the pack. A few drivers were featured and others ignored, while technical details were glossed over or oversimplified. In other words, it was FOX Lite.

When FOX burst into NASCAR more than a decade ago, the network brought a lot of toys — new graphics, cutaway cars, cameras on cables and booms that could follow a single car just about anywhere, fancy segues. It brought new personalities and a flashy, high-tech look.

But it forgot about the racing. Along the way, FOX decided fans didn’t need to know about everything that was happening. Less was more, and fans were just along for the ride.

Other networks followed suit, though thankfully with fewer banal catchphrases, until keeping up with the Joneses meant taking a sport that provoked thought and reflection and giving fans a cartoon gopher instead. And so the sport became a caricature of what it was before the big networks wanted a piece of it.

Back then, fans’ biggest complaint about the coverage was that the broadcast was on a different network every week and they weren’t sure where to find it. So,NASCAR went about fixing that, something that wasn’t difficult because the sport’s popularity was exploding and broadcasters wanted a piece of that action.

From there, the dumbing down of NASCAR began. As the product brought to fans deteriorated, the ratings began to slide, so NASCAR and the networks upped the ante with more gimmicks and gadgets. Fans got even more creative camera angles of single cars or stationary speed cams to watch the cars zoom by without time to see what was happening. NASCAR devised the Chase and all the trappings that went with it and the networks jumped for joy — here was something to focus on every week.

The more changes took place in order to draw in the ADD Generation, the more the ratings suffered — and the more gimmicks and special effects NASCAR and television threw at the wall, hoping something would stick.

Would a return to the glory days of NASCAR broadcasts magically fix the sport? Not anymore, and maybe not in the first place.

But the way the sport is being brought to fans needs to change. Enough fans have been vocal about that on social media and through every outlet they can find for it to be clear that what the networks want fans to want more of isn’t what the fans desire at all. Turns out, fans aren’t as dumb as the networks want them to be.