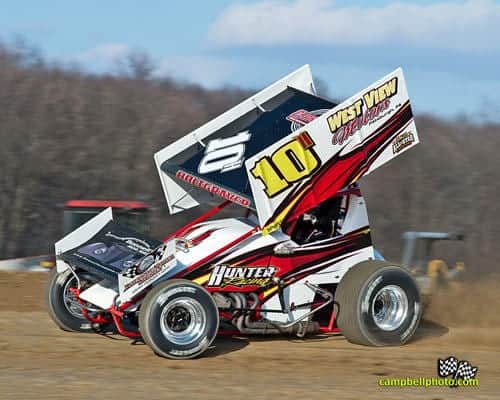 The Pittsburgh, Pennsylvania driver took advantage of other driver’s miscues and benefitted from timely caution flags and drove to his first University of Northwestern Ohio All Star Circuit of Champions win of 2014. It is Holtgraver’s 7th career All Star victory and he became the 10th different winner in the series out of 11 events in 2014.

“Boy did this team need that…this one is big. We got lucky all night. In the heat the guy ahead of me got moved back a row for jumping the start and that put me in a position to race my way into the dash. Then at the start of the feature the guy ahead of me jumped the start and that moved me to the front row and at Butler track position is huge,” said Holtgraver beside his Golden Flavor Sesame Sticks/Berlin Natural Bakery/Bonnell’s Rod Shop/West View Motors/DKW Transport backed #10h.

“Chad (Kemenah) was better than I was in traffic but the yellows came just when I needed them. It’s been a rough couple of weeks for this team. We’ve been kind of bummed out. It was to the point when we got to the track we were like ‘wonder what the hell is going to go wrong now.’ So this win is a huge shot in the arm,” added Holtgraver.

The weekend was also a shot in the arm for Chad Kemenah’s team. The four time All Star champion has struggled this year but a second place Friday in a non-sanctioned event at Attica followed by a runner-up finish Saturday at Butler is just what the doctor ordered.

“This car handled well on the old Goodyear Tires but the last two years we’ve been beating our heads against the wall. We stripped it down and took it to Tony and Johnny Beaber this week and they lengthened the frame and it a whole different car to drive. I’m getting my confidence back,” said Kemenah of his Hampshire Engines/Lima Auto Mall/Radio Hospital/Champion Oil backed #63.

“I didn’t need all the cautions. I was better than Danny in traffic,” added Kemenah.

Lee Jacobs, the UNOH All Star Circuit of Champions only repeat winner in 2014, continued his impressive run of finishes, recording another podium run.

“If you would have told me at the start of the year we would have two wins and come from deep in the pack to get great finishes on a consistent basis…this is just amazing journey this team is on. The Lewis family has given me a fantastic opportunity and my cousin Coty is working his butt off. I feel so blessed,” said Jacobs beside his Simcox Grinding and Steel/Crown Investments/New Leaf Tree Service/HP Engines/OC Shocks/Classic Metal Finishing backed #81.

“It’s so hard to pass at Butler and track position is everything. The guy next to me jumped the start and that put Danny beside me and he got the jump on the start. I knew it was going to be tough to get around him. I tried a bonzai move on a restart in one and two and Chad got around me and after that it was just trying to get through traffic and hope someone screwed up. But Danny and Chad rarely make mistakes so we’ll take third and get ready for Ohio Speedweek,” added Jacobs.

For Holtgraver, Kemenah and Jacobs, the finish helps inch them closer to Dale Blaney in the UNOH All Star’s Ohio Region point standings. That championship may well be determined in a couple of weeks when the 32nd Annual Ohio Sprint Speedweek – 9 straight races in 9 nights – takes place.

The UNOH All Stars will travel east over the next week for three big Eastern Region points battles. It begins Wednesday, June 11th at Canandaigua Motorsports Park nestled in the heart of New York’s picturesque Finger Lakes Region. The series then travels to the heart of PA Posse land Friday, June 13 to take on the ALWAYS tough regulars at Williams Grove Speedway in Mechanicsburg, PA before wrapping up the swing on Saturday, June 14 at Lincoln Speedway in Abbottsown, PA.

For more information on “America’s Series” go to www.allstarsprint.com

All Star Circuit of Champions (23 Cars)