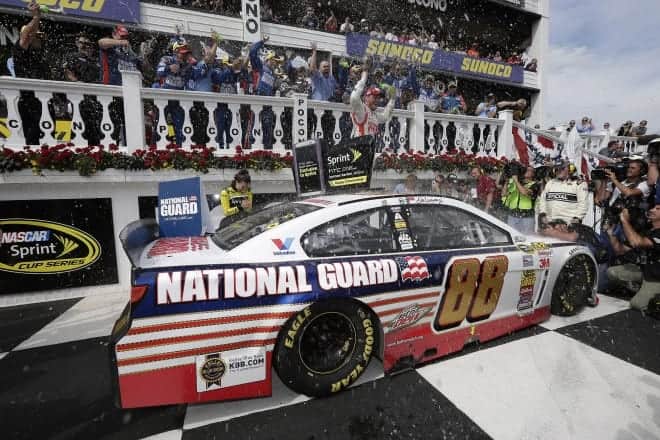 ONE: The Final Four

Following Dale Earnhardt, Jr.’s second win of the season at Pocono Raceway, we now have four drivers properly and officially locked into the Chase. Earnhardt, as mentioned, is one, with Kevin Harvick, Joey Logano and Jimmie Johnson the other three drivers with a pair of victories to date.

Now, I know all year we’ve heard about “win and you’re in,” but given we still have 12 races and already 10 race winners, it’s very possible we could have 17 winners by the time we hit Richmond International Raceway. Don’t forget the winless list includes Matt Kenseth, Kasey Kahne, Tony Stewart, Clint Bowyer and Greg Biffle to name but a few, not to mention we’ve got another race at Daytona International Speedway and two road courses on tap.

So I’m going to say the four drivers with multiple victories look like the most likely to make up the Final Four contending for the title at Homestead-Miami Speedway. Given we’ve had 14 races, just four short of halfway, I feel like it’s a big enough sample size.

What say you, folks? Who are your top four drivers as things stand? Is there a surprise winless name you’d pick? Or some other driver from the one-win category? Let me know what you think below.

One of the things I most enjoy about NASCAR is that any number of random things can — and sometimes do — happen each and every race. From drivers crashing into jet dryers, caution lights randomly turning on, pace cars catching on fire to weepers, potholes and even poor old Jeff Hammond’s locations on the FOX broadcasts, you name it and if it hasn’t happened yet, it probably will.

Another “random” chapter got added Sunday, when Brad Keselowski missed out on a 12th victory in his 175th Cup race because a fifty-cent — that’s a guess — hot dog wrapper found its way onto the nose of the No. 2. And when something like that happens, I always wonder whose hot dog wrapper it was. Was it purchased by a Dale Earnhardt, Jr. fan, for example? Or was it one of Keselowski’s own devotees who bought the offending dog? Did said wrapper just fly out of a garbage can with all the car turbulence or did someone deliberately throw it on the track?

I realize that you’re probably thinking, “Who cares?” But I do. Something as simple as a piece of waxed hot dog paper can literally turn a season.

Now with Keselowski, he’s fast and running well enough to take it in stride, but the ending still does make you wonder. “It is just one of those deals,” a sanguine 2012 Cup champ said post-race. And yes, it is, but only in NASCAR, folks, can a hot dog wrapper change a race. Only in NASCAR. That’s why we love it.

Speaking of random things happening in NASCAR, I’ll segue to Martin Truex, Jr., who picked up a second straight top-10 finish (and third of the year.) For Truex, fighting an uphill battle against the Goliaths of the sport with the Colorado-based, single-car Furniture Row Racing outfit, it was a timely reminder of his talent behind the wheel after a tough opening set of races with his new team.

“We had top-10 cars all year but we were not able to finish races,” Truex said. “The last two weeks we finished the races and got some decent results. We’re gaining but still have a ways to get to where we want to be with our Furniture Row/Denver Mattress Chevrolet.”

And with Sonoma, the site of his last (to date) and second overall career victory, coming up, Truex will be relishing the challenge of trying to secure what would be an unlikely Chase berth with another trip to victory lane. It’s tough not to wish nothing but success for Mayetta, NJ’s favorite son after all he went through last year.

The simple truth is, though for Truex it’s about little victories — and in the last two weeks, that’s exactly what’s he had. Here’s to more of those as we head into the summer stretch and toward the Chase.

Next up for the Sprint Cup circus is the first of two trips to the Irish Hills and Michigan International Speedway. The two-mile track will host its 90th top echelon race, one of the most history-laden tracks on the circuit. Sunday’s race will be 43 years to the day since Cale Yarborough won the inaugural event driving a ‘69 Mercury for the famed Wood Brothers outfit, carrying the banner for the legendary No. 21. In the last race at this venue, Joey Logano won from the pole, leading 51 of 200 laps for Roger Penske while Greg Biffle, who sorely needs a win, took the two previous races at the D-shaped oval.

A recent study by the University of Michigan found that the track generates more than $414 million in total economic activity — a staggering number, which speaks to the power of the sport in general.

“Hosting a NASCAR Sprint Cup Series weekend is about so much more than simply hosting a stock car race,” Speedway president Roger Curtis said. “It’s about jobs, tourism, national visibility, economic impact and a quality of life for Michigan businesses and residents. This racetrack has been a financial shot in the arm for Southeast Michigan, including Detroit, since 1968 — and it all takes place on an annual basis.”

So the next time you start thinking about why Michigan should lose a race (and I get that there is a case for that) remember these numbers and the power of what these events can bring.  It is pretty impressive.

And finally this week, a quick point to finish up. Wasn’t it good to see a normal ticker at the top of the screen again after that abomination of an effort from the previous broadcasters?

I know this graphic is small fry in the grand scheme of things, but as I mentioned above with Martin Truex, Jr. the little victories are where it starts.

Having a ticker which scrolls through the running order in 1-43 fashion might not seem like much, but for me it definitely improved my race. In general, I have always been a fan of TNT’s organic approach to a race — rather than relying on pre-planned storylines — so I was delighted to see the network back in its final stint for the time being as a Cup broadcaster.

With just five more races to go, expect to see TNT finish up strong. It will be missed.