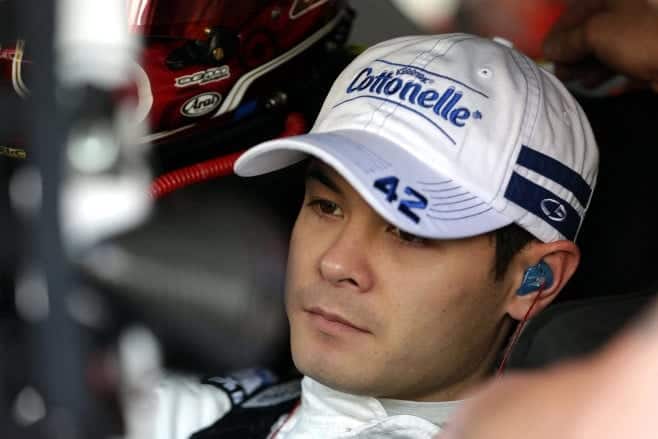 Kyle Larson has been turning heads as a Sprint Cup Series rookie this year, nearly taking the win at Fontana earlier this season while remaining solidly in Chase contention. Larson meet with Frontstretch.com’s Tony Lumbis at Pocono Raceway, where the rookie won the ARCA 200 and brought home a fifth place finish in Sunday’s Pocono 400. The two discussed Larson’s initial impressions of the Tricky Triangle, representing a national brand in Target and home ownership.

This is your first trip to Pocono and by this point, you’ve had some laps under your belt in both Cup and ARCA practice and qualifying. What are your initial impressions so far?

It’s a weird race track. I don’t feel like our car is that good right now, so we’ve got some work to do there. It’s a pretty fun track because it’s different but I like a normal oval track better.

This track stands out for many reasons and one of them involves shifting throughout a lap here. How often are you shifting in a lap?

You were running in the top 10 in practice but you said your car isn’t that good right now. How can you be that quick but not very happy with the car?

Anyone can lay down a fast lap. What’s more important is how you run with a lot of laps on your tires. Even though we’re 10th on the speed charts, I wouldn’t say we are a 10th place car right now.

When you were coming up through the ranks, what was the end goal for you? Was it always NASCAR or were you ever interested in the INDYCAR path?

INDYCAR was never on my radar. I feel like everyone’s main goal is to get to NASCAR now. I started out in dirt open wheel cars and that lead me to where I’m at now. I think it would be fun to run the Indy 500 at some point but right now my goal is NASCAR.

NASCAR’s Drive for Diversity program is something we seem to hear about here and there but not at the level where it was a few years ago. You came through that program successfully. Can you talk about your experience with it and how it helped you get to where you are today?

I was already with Chip Ganassi when I went through the Drive for Diversity program so it probably didn’t help me out as much as it helped out other kids. It helped me to gain experience racing stock cars, which I never raced until 2012 when I started driving for Rev Racing in the K&N East series. The experience I had with that team allowed me to get some new experiences like working with the media.

On the topic of new experiences, you are now representing a national brand with Target. What has that experience been like for you?

It’s been a blast working with Target. We get to do a lot of fun things. I got to work with St. Jude’s earlier this year with Kolohe Andino, the professional surfer who works with Target as well. I got to go to Minneapolis a few times to tour the headquarters and we got to do a neat event there. They are also big with the X Games which I like to go to someday but there is only so much time.

Target is really into racing and they understand it. They’ve been with Chip now for 25 years which is longer that I’ve been alive so that shows how dedicated they are to the program.

It seems like you’re always racing or going to an event, do you ever have any downtime?

The past years have been so busy with stock car racing and dirt track racing. This year has been more focused on stock car racing but I feel as though I’m even busier. Thursday through Sunday we’re at the track and during those weekends, I’m almost always doing double-duty so I feel like I’m constantly in the car. So I think I’m busier now this year than I was last year with the new sponsorship obligations, meet-and-greets and autograph sessions.

How would you rate your Sprint Cup rookie season so far?

I think it’s been going pretty well. We haven’t been the fastest car but we’ve been a top 10 car in most races. We started out poorly with the DNF at Daytona but I feel we’ve recovered well. Right now we’re sitting 10th in points which would have us in the Chase. Those are our main goals for the season, to make the Chase and win Rookie of the Year. So I think it’s going really well.

Was your goal coming into the season always to make the Chase or did that change when the rules expanded the Chase field and the method for getting in?

Our goal has always been to make the Chase, even if they did not expand it. We feel that we have a good enough team to be even top 12 in points. If it were the old format right now, we’d be in. So we’re going to try to stay consistent and maybe click off a win which would be really nice.

You’ve already been knocking on the door for a Cup win this season. Do you have any tracks coming up that you have circled where you feel you would have a really good chance at taking home a victory?

I think when we get back to the tracks we’ve visited already, we’ll stand a good chance. We have some tracks coming up that I didn’t like last year but our car has been good so that always helps.

Have you found that the doing double duty has helped you in the Cup series? There has been varying opinions on whether or not running in another series helps at the top level because the cars are so different.

I don’t think it helps a whole lot with my Cup stuff with respect to the cars themselves. However, running the Cup car actually helps with the Nationwide program since the cars in that series are slower compared to Cup. There are things in the Nationwide race itself that helps with the Cup race such as learning about the tire wear and figuring out where the best groove is. I like doing double duty, I’ve always raced a lot of events in a week, so I enjoy doing two in a single weekend.

Has there been anyone in the Cup or Nationwide garage that you’ve leaned on or like to bounce ideas off of?

Jamie McMurray is a great guy and easy to work with. He does a good job with trying to teach me some things and I feel like we’ve been working really well together. I think Jamie is the guy I’ve been leaning on the most lately.

You just purchased a new home. How has home ownership been treating you so far, assuming you’ve even had time to be in your new house?

I got the house recently but I’m not moving in for a few months as we’re going to be remodeling the kitchen and living room and building a pool. It’s exciting, I wish we could fast forward so I can be in already. I’ve got an apartment now in a nice area and I’ve enjoyed my time there but I feel it’s time to start a new chapter.

I have been very impressed with Kyle Larson. Prior to the season, we heard a ton about Austin Dillon, but not as much about Kyle Larson. Larson drives with a lot a maturity and is going to be a competitive driver in Cup for many years to come. I really like this kid!