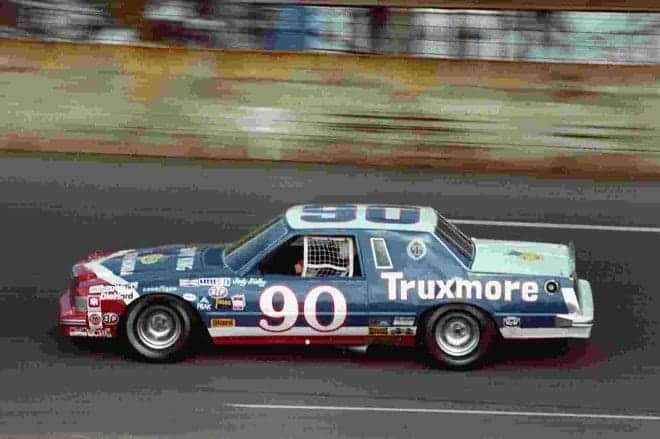 NBC affiliate WWBT (Richmond, VA) is reporting that former Sprint Cup Series car owner Wesley Christian Donlavey, better known as “Junie” Donlavey, passed away Monday night at the age of 90, according to family members.  Donlavey had been suffering from the effects of Alzheimer’s Disease in recent years.

Donlavey was the principal owner of Donlavey Racing, a team that competed in what is now the Sprint Cup Series for over 50 years.  Over 863 starts, Donlavey’s team had only one victory, the 1981 Mason-Dixon 500 at then-Dover Downs International Speedway with Jody Ridley at the wheel.  There, Ridley made up seven laps due to the misfortune of others to take the victory. 1981 also happened to be Donlavey’s best year as an owner, as Ridley was able to finish fifth in the standings while driving all but one race in the No. 90. The team first competed in NASCAR’s second season, 1950, and ran mostly full seasons starting in the mid-1970s.

Donlavey’s organization was never a top team in the Cup Series.  Instead, it became a stepping stone for up-and-coming racers.  Ken Schrader drove that point home in his book, Gotta Race!  There, Schrader described Donlavey as a good evaluator of talent and someone that would give a solid recommendation to a driver furthering their career.  Also, Donlavey loved collecting the extra money that came with being fastest in second round qualifying.
Other notable drivers who spent time in Donlavey’s No. 90 included Ricky Rudd (1979), Bobby Hillin, Jr. (1993-94), Dick Trickle (1996-98), Benny Parsons (1988), Ken Schrader (1985-87), and Dick Brooks (1972-73, 1975-79, 1983-84).  The owner last made a Cup race in 2002, with Jason Hedlesky at Charlotte before gradually disappearing from the grid over the next few seasons.
We at Frontstretch send our condolences to the Donlavey family.

I’d like to think that the reason that no one commented on this article was due to this article coming out right when the new website was launched so it was sort of lost in the shuffle. Junie was a great car owner that gave a lot of drivers, (over 60) their start throughout the years. While his team didn’t have great success on the track he did receive great respect throughout the garage. I always felt that he put his team at a disadvantage being based out of Richmond VA. but that could be my own frustrations of always hoping to see Dick Trickle win a Winston Cup race. Also I need to point out that even though Junie’s team wasn’t a top-tier team by any stretch of the imagination they, as many other one car teams still received coverage during the races. If Junie still had a team at this point they would never be seen or mentioned on TV. Sad commentary on how racing and race coverage has “progressed” over the years. NASCAR could use a few more Junie’s.