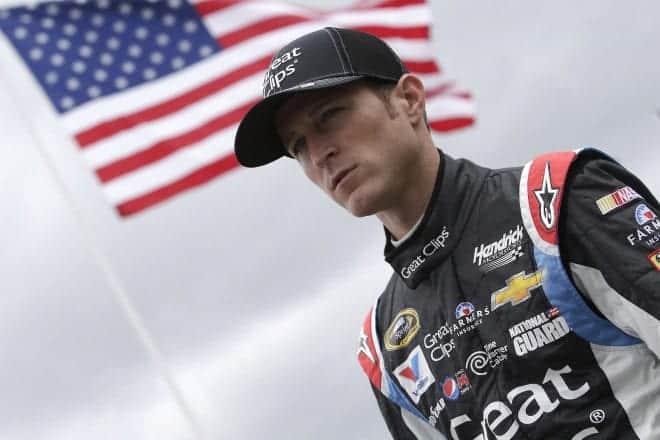 Welcome to the Frontstretch Five, a brand-new column for 2014! Each week, Amy Henderson takes a look at the racing, the drivers, and the storylines that drive NASCAR and produces a list of five people, places, things, and ideas that define the current state of our sport. In the latest edition, Amy has five drivers who haven’t quite met expectations as spring turns into summer.

To be fair, Kenseth isn’t really having a bad year. In fact, by most standards, he’s having a pretty good one; he’s second in points and is tied for the Cup Series lead with ten top-10 finishes in 14 races. He’s been in contention for wins. But the fact remains that he hasn’t won, and the No. 20 bunch, along with the rest of the Joe Gibbs Racing camp, looks to be just a tick behind. They’re all running well, but they aren’t running away with anything. A year ago, Kenseth was the hottest driver on the circuit, with three wins by this point in the season, and he’d go on to contend for the championship almost down to the wire. So, while Kenseth’s winless 2014 isn’t particularly troubling, and he’ll likely grab a win somewhere (and even if he doesn’t, he’ll likely be in the Chase on points), it’s not the season many expected him to have, and if he wants to be a title contender, he needs to find a way to turn the top 10’s into wins. Kenseth doesn’t need to do a complete 180, but a win or two in the summer months would go a long way in preparing him and his team for a title run in the fall.

Kahne is having an abysmal season. With just four top 10’s in 14 weeks, just about everything that could go wrong for the No. 5 team has. Some of it hasn’t been of Kahne’s or his team’s making—he has been caught in a couple of crashes and had some tire issues. He has been fast at times, too. Jimmie Johnson and Chad Knaus gave Kahne and crew chief Kenny Francis credit for the setup that helped Johnson win the Coca-Cola 600 last month. Yet it’s been week after week of frustration for Kahne, and there’s really no end in sight. He could easily win a race this summer and squeeze into the Chase, but he could just as easily remain mired in the low 20’s in points, and that’s disturbing. Kahne is looking downright despondent in the garage these days, and that doesn’t bode well, either. If his confidence is shattered, it will just be that much harder to put together a solid summer run.

Bowyer and the No. 15 bunch have simply not been the same since the now-infamous intentional spin at Richmond last fall. Meant to help put then-teammate Martin Truex, Jr. on solid ground for the Chase, the move backfired, miring Bowyer, Truex, and Brian Vickers in scandal when they should have been working on championship strategy. Bowyer’s team has yet to recover from a Chase in which they seemed (perhaps rightfully) more worried about their future than about the task at hand. Whether that’s got them behind the curve or whether the new rules have just thrown them a curve is hard to say…but something is amiss here, and time is getting short to change things. How different is this team form a year ago? After Pocono last year, Bowyer had seven top 10’s and four top 5’s, nearly double his numbers in those categories this year: four top 5’s and two top 10’s.

A rookie no longer, Patrick should be picking up her performance, but she really hasn’t been much better than she was a year ago. Patrick was much-hyped as she came into the series, but she hasn’t lived up to it yet. She’s shown a willingness to learn and tries to communicate the issues with the car to crew chief Tony Gibson, but continues to struggle with finding a comfort zone. 28th in Sprint Cup points, Patrick isn’t far ahead of the underfunded teams of Justin Allgaier or Michael Annett, and while she has shown some speed, she hasn’t been a real threat to win or even crack the top 5. Now, with changes afoot with primary sponsor GoDaddy.com, a company that has lost money in recent years despite extensive ad campaigns, Patrick could find herself on the hot seat if she doesn’t perform better. Sure, the company gets plenty of airtime, but there’s only so much positive spin you can put on a 27th-place average finish.

Dillon’s not really having a bad year. After all, he is a rookie. It’s just that another rookie has stolen his thunder and is outperforming him on a regular basis. Despite having equipment that’s been better than Chip Ganassi Racing has had in recent years, Dillon is playing second fiddle to CGR’s rookie driver Kyle Larson in 2014, with one top-10 run to Larson’s six. Larson has also cracked the top 5 three times, something Dillon has yet to do. Dillon did win the pole at Daytona in February as the No. 3 returned to the track for the first time following Dale Earnhardt’s fatal crash more than a decade earlier, but that was Daytona, and months later, his shining moment is long over. Dillon is young, well, funded, and reasonably talented, so there’s no reason that he won’t succeed. The question is whether he’ll spend his career in Larson’s shadow or shine in the spotlight.