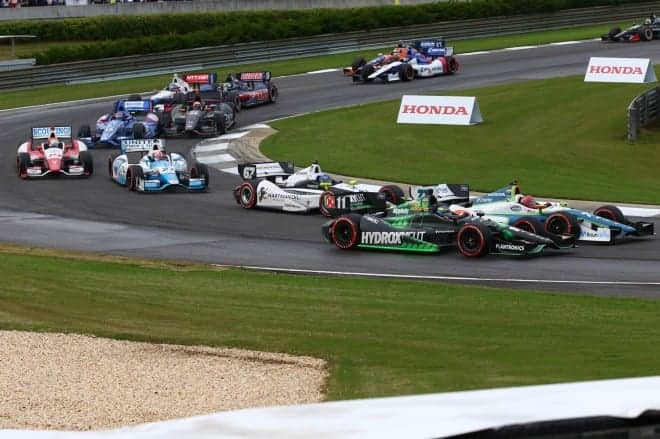 After an exhausting stretch that saw the Verizon IndyCar Series run four races in three weeks in three different states, and on three different kinds of tracks, drivers and teams finally get a well-deserved summer vacation as the series takes the next two weekends off.

It’s right about the halfway point of the 2014 season for IndyCar, with eight races in the book and ten to go, so it’s a good time to hand out the midseason report card so to speak. What have been the good points, the bad points, and the just plain ugly points so far this year?

The Indy 500: OK, the clean, green first three quarters might not have been everyone’s cup of tea, although many true racing enthusiasts found it a great testament to the skill of the drivers to make it so far without incident at such impressive speeds. There were just so many great things about this race. The battle over the closing laps, and ultimately the finish were everything you could ever ask for. Ryan Hunter-Reay’s pass in the grass, and it really was a nip through the grass with the left sides at least, was the gutsiest thing most have seen on a race track in ages. Kurt Busch’s double attempt lived up to the hype, at least on the IndyCar end, and there was a sneak peek at the future of the sport in the equally impressive performance of young rookie Sage Karam.

The On Track Product: If we’re honest, it hasn’t been just the Indy 500. There has been a lot of good racing, on every kind of track the series has visited so far this year. There have been two repeat winners, in Ryan Hunter-Reay and Will Power, but there have been other faces atop the podium too, including the tandem of Ed Carpenter and Mike Conway, each doing what they do best, and Simon Pagenaud, taking the win in the inaugural Indy Grand Prix that kicked off the month of May, an event that proved to be a big success.

The Killing of the Grid Spot Penalty: Thank you, INDYCAR, for dumping the ten grid spot penalty drivers were assessed last year for early or unapproved engine changes. By the end of last season, frankly, it was becoming a bit of a joke, with many drivers out of fresh engines for the season, combined with those who were close enough on miles to suck it up and take the penalty in exchange for the peace of mind of being able to make the distance, resulting in fields that were virtually inversions by the time everyone went to the back.

Chip Ganassi Racing: The funk just continues for Chip Ganassi Racing. Let’s just remind ourselves that this is the team that won the championship with Scott Dixon last year. There could, perhaps, be an argument that there were warning signs last year when Dario Franchitti spent much of the season off the pace. There was some inclination to place the blame on Honda, for being behind the Chevrolets being campaigned by Penske and Andretti. That argument no longer holds, primarily because Ganassi switched to Chevrolet over the offseason while Andretti went to Honda, and both Andretti, and fellow Chevrolet team Penske are well ahead of the highest placed Ganassi driver so far this year, namely defending champion Scott Dixon in eighth. Tony Kanaan is one spot behind him in ninth while Ryan Briscoe and Charlie Kimball are languishing in 13th and 14th. Dixon isn’t only eighth, he’s a distant eighth, 156 behind leader Power. That’s almost as many points as Kimball has even amassed this season (he has 169).

What Bad? Not so sound all “company line” here, but there really isn’t much bad to talk about this season. Some ugly things, but those are different than bad. Honestly, it’s been quiet in the ranks of leadership, there seems to be a plan, and a direction, and the financial picture looks somewhat better thanks to the new deal with title sponsor Verizon. The series certainly hasn’t lost any ground and appears poised to head in a better direction. Finally.

Those Standing Starts: The big snafu this year so far, marring an otherwise stellar debut, was the standing start for the Indianapolis Grand Prix. After the car of pole sitter Sebastian Saavedra stalled on the grid, competitors swerved wildly to dodge him, a proposition that got more difficult as drivers further back with poorer sightlines entered the picture. Two of those drivers, Carlos Munoz and Mikhail Aleshin, were unable to avoid Saavedra, resulting in a colossal crash that sent shrapnel flying all over the track. The standing start is exciting, when done properly, but teams and drivers need to embrace it and get prepared for it if the series is going to continue to use it.

Points Confusion: A “thank you” to INDYCAR for clearing up the confusion on the starting grid resulting from the engine change penalties, as noted above. It has instead been taken out of the on track product and implemented as points penalties instead. Which is fine, but it does tend to make the manufacturer’s standings a touch more difficult to follow because after every race there seems to be announcements made about points penalties to both manufacturer’s for multiple entrants. On the other hand, if both manufacturer’s are receiving penalties, perhaps it essentially cancels out. For the moment, Chevrolet holds a lead of 218 over Honda. We think.

There are lots of other things that could make this list perhaps in various spots, but the encouraging thing on this midterm report is that most of what comes to mind falls under “The Good,” something that has not often been the case for INDYCAR in recent history. With half of 2014 in the books, there’s some predictability as far as which drivers look like championship contenders, but it’s still shaping up to be a good battle. There’s great racing on the track and on a week to week basis, the outcome is not as predictable. Go on and catch your breath for a of weeks, but don’t forget to come back for the rest of the 2014 Verizon IndyCar Series because it’s looking like a good one.