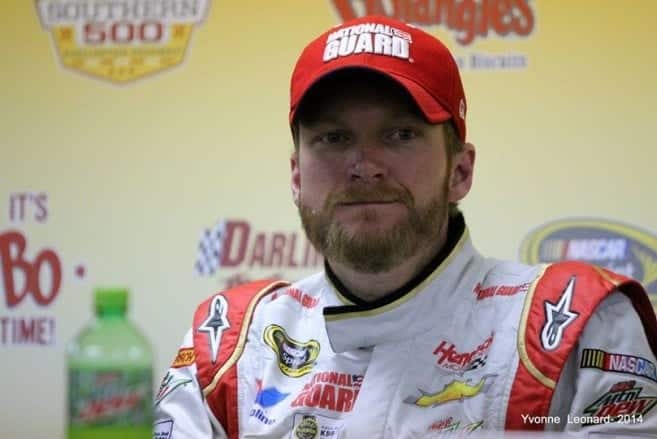 Michigan International Speedway isn’t exactly synonymous with Dale Earnhardt, Jr., but it has been the site of a few personal highlights for him.

That may continue this weekend when he competes in another Nationwide Series race at the two-mile oval.

Saturday is the fourth and final scheduled race for him this season, and one the company put extra effort into making happen because the race comes with the cool, maybe nerd, factor, as Earnhardt, Jr. will drive the No. 88 eBay Chevrolet, a perfect fit for someone who earned a reputation for being up on the computer during all hours of the night.  The cyber world in general has been an extension of him for many years through iRacing and now on Twitter.

All Earnhardt did was open his mouth — and as often happens, when he does, people listen — about his shopping habits and boom, sponsorship.It certainly has little precedent; if you find Derek Jeter having a yard sale on the weekends or selling things through the Internet, please let me know. Oh, and was anyone surprised when he said he’s a top-rated seller?

Sometimes clichés really do make sense, because driver and sponsor are a match made in online heaven.

But back to the upcoming weekend at hand, Earnhardt is riding high for many reasons. Coming off his second Sprint Cup Series win of the season in Pocono, he now heads to the big oval where he’s won two of the last five June Cup races and very well could have added one or two more last year; he was leading when his engine expired in June and then cut a tire in August and slapped the wall after having led early. He’s also got two poles at the facility.

He’s been just as impressive in the Nationwide Series, to boot. He’s also bound to have fun this weekend, which is the primary reason why he’s entered. Earnhardt isn’t there to prove anything or because he wants to add another notch in the win column; if anything, he’s there to enjoy himself while learning what JR Motorsports needs to improve.

Michigan is a good place to do it. In four career Nationwide starts at the track, he’s led 92 laps and won twice (1999 and 2006). For those of us who are into numbers, two is a good number for Earnhardt — like the two eights on the side of his door or the two Nationwide championships he has. Besides two wins, though, he also grabbed fifth- and seventh-place finishes in the other two starts.

And this Saturday, the driver has a great chance to do what he hasn’t done since 2006: win a Nationwide Series race at a non-restrictor plate track.

He’s been to victory lane since then — though only once, when he drove the No. 3 Wrangler Chevrolet at Daytona in July of 2010. That was long ago, and it seems his start at Michigan was even deeper in the past.

I have admittedly always been one to believe the best highlights occur when you least expect them; they cannot and will not be forced. Earnhardt isn’t one to make highlights for things outside of the box or his comfort level — meaning he’s not his dad, and it’s fruitless to try and find such moments on his resume. On that Michigan day, though, the bumper was his best friend, and it leaves you to judge who was at fault or if it was one of those racing deals drivers and fans often converse about.

On a restart with two laps to go on Aug. 19, 2006, in the Carfax 250, Carl Edwards led Robby Gordon and Earnhardt, who were both driving for Dale Earnhardt, Inc.. Edwards never made it off turn 2, thanks in part to a combination of a loose car and a fast Earnhardt.

But if all is fair in love and war, Edwards — who has undeniably had his fair share of war — was going to make good on the adage. Like something straight out of Days of Thunder, Edwards parked in Earnhardt pit box, then grabbed a gear and headed off pit road with bad intentions. And who were we to stop him? If anyone had a problem with what he did next. you’re either an Earnhardt fan or want to turn NASCAR into the NFL — a non-contact sport.

Edwards body-slammed Earnhardt as the field came around. Problem was the driver of the No. 8 had his hand hanging out of the window when the contact occurred, though Edwards got lucky nothing disastrous happened. Meanwhile, the checkered flag was thrown, and after requesting all three drivers come for a hauler visit, NASCAR was still trying to figure out who the winner was: Earnhardt or Gordon. Although Edwards felt the sport’s most popular driver should have been black-flagged, he lost the debate and Earnhardt won the race. But Edwards, well, he wasn’t done, as he headed for victory lane to give the winner a piece of his mind.

The drama of that day continues to live on in all race fans’ hearts because it was a prime example of what is yearned for each week. I’m not counting on it happening again this weekend, and it’s even more doubtful that Earnhardt will play  a part in it, but a giant limb I will go out on is saying he and the rest of JR Motorsports will be around for the win on Saturday afternoon. His two full-time cars lead the way in the series for regulars, with three combined wins while sitting first and third in points.

Seems like it’s damn good to be the man behind it all, whether it’s in the car or out. Not like it wasn’t good to be Dale Earnhardt, Jr. to begin with.

That Robby sure could wheel. Too bad he couldn’t stay in the sport.