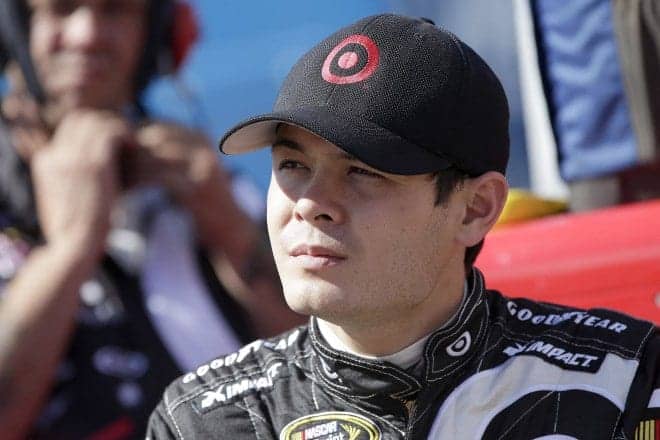 Kyle Larson, driver of the No. 42 Chevrolet for Chip Ganassi Racing, announced via Twitter that he and girlfriend Katelyn Sweet are expecting their first child in December of 2014.

The 21-year-old Larson is currently in his rookie season in the NASCAR Sprint Cup Series. After 14 races this season, he is sitting 10th in points with three top 5s and six top 10s.

Larson held a media availability on Friday at Michigan International Raceway, the site of this weekend’s Quicken Loans 400, saying, “”I’m having a blast this year. A lot of stuff going on. Me and Katelyn just found out we are having a baby, so it’s a really exciting time. How good the racing has been going, a new house, all that and now that, so it’s been a lot of fun.”

Larson’s much-hyped entrance in to the Sprint Cup Series has been nearly trumped by news regarding his personal life this season, as Larson also purchased a house recently (an announcement he also made on Twitter). The baby is due around Christmastime, which falls during NASCAR’s offseason.

Add Larson to the baby boom that has taken NASCAR by storm as of late. Clint Bowyer’s wife is also due for the couple’s first child later this year, while Paul Menard and David Ragan welcomed their first children earlier this season.

A young kid knocks up his girlfriend. What is this TMZ? What exactly does this have to do with racing and why should any of us care?

Why would he even brag about this..backwards priorities and so young. Well this girl has got a lifetime’s worth of checks coming her way, somebody trained her well. Cha-Ching. Kyle you are a dummy.