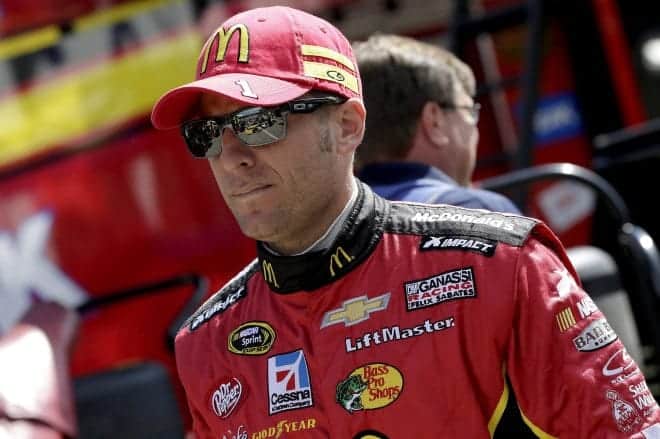 Racing to the Point: Some Drivers Need to Stop Being So Nice

Dale Earnhardt, Jr. is lucky he has friends.

Two weeks in a row, a driver with Hendrick Motorsports horsepower eased off the throttle and allowed Earnhardt to catch up and clean his front grille by sucking up on their back bumper. The kindness of his competitors kept Earnhardt in the hunt in both races, instead of down pit road to remove the debris or up in a ball of smoke after his engine overheated.

NASCAR racing sure has gotten friendly. Maybe at the next oval, Kevin Harvick will slow down after he learns that Jimmie Johnson’s crew made a mistake on their last pit stop. Well, it wasn’t his fault Kevin, and he is sort of your teammate in a roundabout way.

The Dynasty NASCAR Built… Or Is It Hendrick?

Sometime in the last decade, when the sponsorship money started drying up, and everyone became a satellite team of everyone else, the racing became too nice. Even 10 years ago, if you had a piece of debris on your grille, you better hope to hell the caution comes out, you can track down the car in front of you or your teammate is the next car in front you. Even in situations where it was your teammate right in front, there was no guarantee he was going to slow down to help you.

The whole idea of slowing down to help one of your top competitors in a NASCAR Sprint Cup race is backward. The point of running these marathon 400- or 500-mile races is to weed out some of the field through attrition. You don’t just have to have the fastest car, but it has to be reliable, and you have to consistently have a team that executes on pit road, a crew chief that makes the right strategy moves, a driver who makes intelligent choices and a little luck, too.

Helping the car that is trying to track you down makes about as much sense as a deer helping a hunter. That’s part of what made Jamie McMurray’s actions on Sunday so disturbing.

In case you missed it, McMurray was all over the back of second-place Paul Menard with 38 laps to go when all of sudden he pulled low and slowed down the frontstretch to help fourth-place Earnhardt rid trash from his grille. Earnhardt wasn’t anywhere near McMurray when he initially slowed, so it took about two laps before he even reached McMurray.

The commentators in the TNT booth questioned McMurray’s move — and for good reason. He is winless this season (outside the All-Star Race) and outside the Chase, and intentionally backed up to help a driver with two wins and is solidly in the Chase that isn’t even a teammate. And once again, this wasn’t lap two; there were 38 laps to go and McMurray was on the rear bumper of the second-place car.

Why would the Chip Ganassi Racing driver feel so compelled to help the Hendrick driver that would he would risk his own shot at a victory? McMurray doesn’t get a lot of shots, either. The Ganassi cars run Hendrick engines, but last time I knew the partnership between teams wasn’t nearly as strong as with Hendrick and Stewart-Haas (Hendrick 2 is a better name).

Is there now a Hendrick 3? Are there 10 Hendrick drivers now? All I know is that two weeks in a row, Earnhardt beat the driver who helped him to the finish line.

Maybe McMurray is just a really, really nice guy, or maybe he felt like he owed Hendrick something — but regardless, everyone helping everybody else get to the finish line is good for running marathons, but it shouldn’t be happening at the top levels of auto racing.

The racing doesn’t need to be cutthroat. It’s OK to let a car pass, instead of fighting tooth and nail for 17th. But during an era of slumping TV ratings, watered-down personalities, robotic interviews and everyone in the garage partnering with everyone else, it would be great if the drivers stopped being so nice.

Brett starts his fourth year with the Frontstretch in 2014, writing the popular Racing To The Point commentary on Tuesdays. An award-winning Connecticut Sportswriter and Editor, Brett resides in the Constitution State while working towards his dream of getting involved in racing full-time.
Previous The Dynasty NASCAR Built… Or Is It Hendrick?
Next Who’s Hot and Who’s Not In Sprint Cup: Michigan-Sonoma Edition