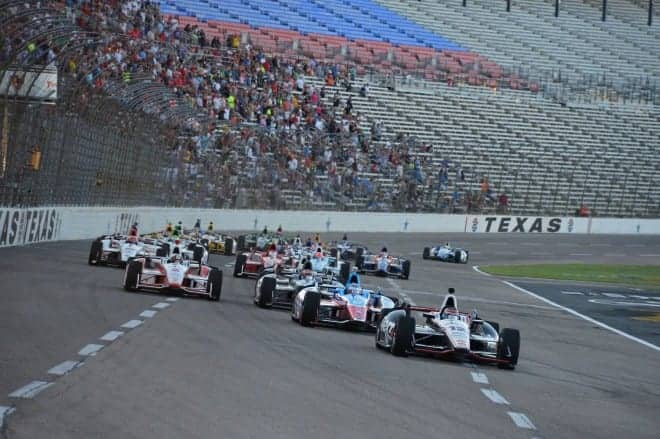 There’s little in the way of news for IndyCar this week.  Heck, there’s been little in the way of news for a few weeks now.  There’s been no Silly Season discussions, no big sponsorship deals, and no big announcements regarding tracks.  There have been some rumblings of a different schedule for next year, but it has yet to be fully realized.  And now the series is in the second week of a break.

IndyCar decided to take a break at an interesting time.  Not necessarily a bad time, just an interesting time.  For starters, IndyCar actually needed a break.  Running the Indy 500, the Duals at Detroit and then the race at Texas on back-to-back-to-back weekends was a whizbang of racing – and for an 18-race schedule, it was over one-fifth of the season.  Hence the decision to have an off week was a good one, though it might have been better placed directly after the 500.

The problem is, IndyCar didn’t just opt for a one-week break.  By the time the series resumes in Houston, it’ll have been three weeks without the open-wheelers turning competitive laps.  But maybe that’s OK.

One of the reasons that NASCAR continues to face falling interest is a simple one, and no, not Jimmie Johnson/Hendrick Motorsports excellence.  The problem they face sometimes is overkill.  There’s just so many races, on so many Sundays, regardless of what else is happening.  The fact that the series visits some tracks twice, too makes those events seem to have less meaning.

IndyCar, however, faces the opposite situation.  With just 18 races, and six of them being part of doubles weekends, the series needs to get around more.  Some of this issue is assuredly financial – track hosting fees and whatnot.  But it can’t all be that, can it?

The work of rebuilding the series is an arduous one.  That just under a million people tend to tune into races not named the Indy 500 shows how little social relevance the sport has.  Yet the racing this year has been some of its finest in a long while.  Though Frontstretch’s Matt Stallknecht may have poo-pooed the Texas race, it really wasn’t that bad.  Or, using NASCAR as a comparison again, there’s no way that the race at Texas was worse than the most recent Cup event at Michigan.

So the break is interesting because right now represents a time when IndyCar could be capitalizing on NASCAR’s downtrend.  With stock cars continuing to show no willingness, desire, or inclination to partner or work with IndyCar in any regard, there is an opportunity to strike a counterpunch.

The IndyCar series, by comparison is now the Little Engine That Could.  Sure, it fell apart, had to be put back together and sits well behind the hyper-engineered V8 behemoth, but it’s still there, chugging along.  So this early summer stretch is when the series should be at it, hitting tracks NASCAR doesn’t and areas that are under-utilized.

The problem, however, is that when IndyCar does resume, they’ll be going to, uh, um, Houston?  Right, Houston, that mecca of motorsports.  Even better, who doesn’t want to travel to Houston, in the summertime, for two days of racing, during the day, in the Houston humidity?  The idea of visiting the city is right; the timing is just, well, awful.  The track is also the place where Dario Franchitti’s career ended in a spinning fly into the fence, so it’s not like there’s a happy vibe surrounding the place.

Scheduling has long been a problem with IndyCar, and the goal here is not to continue harping on that topic, although it is all too easy.  Rather, the interest here is in recognizing that IndyCar is letting one slip away right now by having such a long break.

It’s important to mention that the IndyCar season ends early this year, concluding with the finale on Labor Day.  That means there’s just three months left.  The schedule this year has been a vast improvement, and the series will avoid competing with NASCAR’s Chase and football, which should be to its benefit.  But the summer months are when it should be making its mark.  It’s a time to show that the racing is worth watching, that the product is better than it has been. Oops.

For more fun, the IndyCar Series has 10 different nationalities that are represented in the World Cup (™, not to be used without the permission of Ricky Bobby, Inc.).  The series is missing a chance to go that whole human story route and show the drivers following their teams, all the fun kinds of tie-ins that would accompany such a thing.  Sure, enough WC BS, but those are the types of things that might draw interest from people who don’t usually follow IndyCar.

Isn’t that the goal (not Goooooaaaaaaalllllllllll) at this point, trying to bring in the new eyes? Most Americans aren’t tuning in, so why not try some other avenues to success?

Or maybe not race in Houston near the beginning of July.  Either way, it’s still the little series that could, and it’s still going, and that’s what matters.

I wouldn’t worry too much about indycar fan interest. There is a small but dedicated fan base and more tv airtime than programming. About the only thing I could imagine upsetting the apple cart is following the NASCAR practice of driving off your fan base in pursuit of those with no interest in the first place.