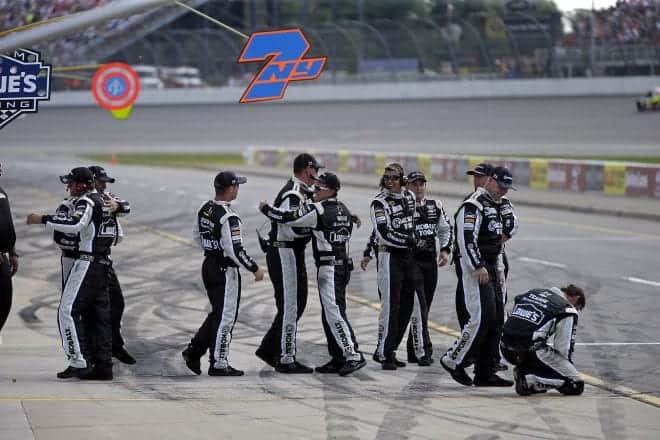 If you take a quick glance at NASCAR Nation through the eyes of social media, along with the various blogs, news outlets, and other media organizations that cover the sport, the Sprint Cup Series championship is all but wrapped up. The No. 48’s won three of the last four races, six of the last eight championships, and darn it if Chad Knaus and Jimmie Johnson are, amazingly enough still saying they aren’t quite where they want to be in terms of speed and competition.

Meanwhile, all the other teams are hyperventilating into brown paper bags and wondering how much second place is going to pay this season. I mean … it’s over, right?

I’m as guilty of it as anyone, but we have got to quit handing the trophy over to someone when there is still over half the season and an entire Chase left to run. And let’s keep in mind that this Chase format is one we’ve never seen before, so none of us even knows if success at this point in the season will mean a dang thing once the points reset for a final time in Homestead. Who’s to say that Johnson will even still be in contention when we reach that point? It’s not going to take much for someone to lose a spot in the finale with the way NASCAR has set the Chase up.

Of course, no one will be surprised if Johnson is in contention in Homestead, but that’s not really the point. I saw way more, “This is why NASCAR is dying!” tweets with fans frothing at the mouth about Johnson winning again than I care to admit, and the Chase field is nowhere near being completely set yet. If NASCAR were still under the old system — any of the previous systems, not just last year — perhaps the moaning and groaning would be somewhat justified. But this year? We have no freaking clue what Michigan will have to do with the postseason, if anything at all. Good for Johnson for finally breaking the Michigan hex, but I bet you it won’t mean anything to him if they lose the title this year.

For what it’s worth, I’m not betting against Johnson or making any predictions. It’s just that if I see one more person claiming they don’t watch NASCAR anymore because Johnson keeps winning, I might just lose my sanity. There is still so much more racing left. Why let one guy ruin it?

“The cars on the track and on pit road cannot be worked on at all during a “red flag stop.” However, I’m wondering about cars that are in the garage after a wreck or problem but not officially “out” of the race. Must their teams stop work on those vehicles while the race is red flagged? Thank you.” CA99Fan

Yes, even if a team has been working on a car in the garage area for several laps, they are required to cease work on the car while the red flag is displayed. Now, the team is still able to look at the damage on the car and gather the equipment they need to continue working on it. However, they are not allowed to make repairs or adjustments to the car, once when the red flag is displayed, no matter what their position in the race is.

This way, teams don’t gain an advantage by having extra time to work on their cars when the race is otherwise stopped. Can you imagine how helpful an extra 10 or 20 minutes to work on your car in the garage area would be for a team repairing it? That’s an advantage that the cars on the track wouldn’t have and therefore, NASCAR requires every team to stop working while under red flag conditions.

“I saw that Homestead is guaranteed to be the finale until 2019, which I think is kind of ridiculous. Homestead isn’t an otherwise exciting track, but no one says so because the championship is already there. I personally think we should have the race end at a place like Daytona or Bristol… somewhere that isn’t an intermediate track. What was NASCAR’s reasoning for keeping the finale at a track that is exactly like everywhere else?” Earl

To be technical, Ford extended its sponsorship of the Homestead race through 2019. There was no announcement regarding whether or not Homestead would remain the finale, though track president Matthew Becherer said they wouldn’t have extended their partnership with Ford or made the announcement if they didn’t feel strongly that they would remain the final race of the season.

Personally, I would love it if Daytona began and ended the year. Homestead, by comparison just doesn’t have the same excitement surrounding the race there. I don’t think the racing is boring at Homestead, though. Even if their location on the schedule sets them up for success, I’ve always felt like the racing there has been better than average, especially when compared to other intermediates. But I’ll admit, even their best effort doesn’t match the pageantry that gets everyone wound up for the sport’s crown jewel, February’s Daytona 500. You’ve got to feel the same type of atmosphere could be put in place, rather seamlessly for the season finale.

It doesn’t appear a change is going to happen anytime soon, though, and honestly I’ve never seen NASCAR seriously consider such a thing. In fact, they really don’t seem interested in moving the championship race anywhere else. The only track I’ve heard brought up as a serious prospect for a finale is Las Vegas, and that has more to do with the location of the banquet and the undeniable tourism surrounding that area than the quality of racing. (Obviously.) Even then, that rumor died down a long time ago.

I feel confident saying that Homestead will remain the season finale for several more years, but I’m in total agreement with you that I would love to see it at a more exciting racetrack.

“I noticed that Kevin Harvick wasn’t interviewed by television after the race even though he finished second. I thought the top three were required to give interviews?” Genevieve

Actually, no, the top three are only required to appear in the media center after the event. They actually are not required to do any interviews for television or radio and have every right to decline, but they had better get their butt to the media center or face possible repercussions from NASCAR.

I think Harvick was in the media center for about a minute before he bolted out the door, but he met his media obligations post-race as far as NASCAR was concerned. I’m pretty sure the entirety of his answers would fit inside the maximum word count of a tweet, but he showed up. That’s really all he was required to do.

Of course there is no obligation other than the media center for the top 3..but people lose all respect when there was some good storylines and hard fought top 10’s and the run and seek the token female out who finished 3 laps down and came in 25-30 range. Nuts.

The Chase is just contrived BS of more interest I suspect to the NASCAR press than the average fan. It is a ridiculous format that counts as much on luck as skill in determining a Champion. I’ve enjoyed every race this year as a separate event. The racing has been good. The Chase is of no more concern to me than which just out of his teens driver knocks up his girlfriend.

You can’t blame people for being conditioned to expect Johnson to win the championship again. It gets old watching a movie with the same ending over and over.
While I won’t deny his greatness, I still think the championships are as much a result of the chase format as his ability. Don’t get me wrong he’d have at least 3 or 4 championships regardless of what format was being used.

Why not have the final race at Daytona. A crapshoot race to determine a crapshoot championship format. Perfect.

You couldn’t have a worse place to have the final race at than Daytona or Talledega!!! Put the championship in the hands of some lower tier driver on the same team as a championship contender making a stupid move on track to take out contenders is a recipe for disaster. You think Richmond 2013 (race 26) was a debacle, wait for this catastophy. These tracks are a crapshoot at best. Too much “wrong place at the wrong time”. The contenders would be too nervous to get up front into the mix. These races are already a bore, you would see a parade of the 4 remaining contenders riding in the back.

Bill B
Reply to  John C

Some of us feel the same about the chase itself from it’s initial (mis)conception…. “you couldn’t pick a worse way to decide the champion” but we were wrong. They just did and pick an even worse way.

If you think Richmond was bad last year, wait until this year when you have a bunch of guys needing a win to get in. Teammates will be rolling over to get their guy in. Only this year, they won’t make it look so obvious. I can’t wait to see how Nascar handles the 100% effort rule this year. If you like watching train wrecks, grab some snacks and pull up a chair.

As far as the racing at Homestead. I don’t think its that good. Its overrated due to the hype of the championship. If this race were in the middle of the season it would be a snoozefest. BUT, I would rather have the finale on a track like this, than at a plate track. Richmond would be the best place, but we know that won’t happen.

I don’t much care for Jimmie Johnson or the whole HMS operation and I’m just as tired of them winning as anyone who isn’t a fan of theirs, but that’s what they’re in business to do…. race and win. I’ve noticed that a lot of the people who complain about Johnson and HMS winning so much are the same ones who complain about the race outcomes being “fixed”. You can’t change the rules to handicap one team and then complain about the rules not being fair. Until another team steps up and does what the #2 team did in 2012, the championship is Johnson’s to lose.

Teams with the most money win the most races and the most championships. It’s always been that way. Until someone figures out a legimate, enforceable way to change that, it will always be that way.

I wish they would move the season finale around, but Homestead is ok. There really isn’t a bunch of tracks you can go to in mid-November and expect decent weather. Additionally, Homestead has some of the best 1.5 mile track racing. Cars can pass, tires matter and the progressive banking works well there. It also probably a good idea that the finale now that it will be “winner take all” is on a track where more is in the team’s hands. A Daytona finale would be interesting, but I don’t think teams want a plate race with the title on the line.