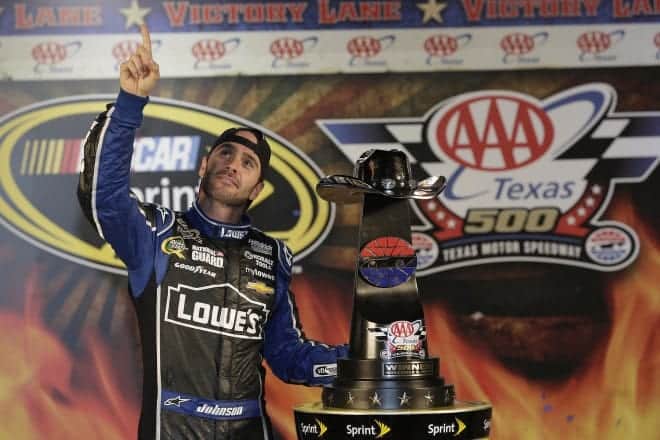 Welcome to the Frontstretch Five, a brand-new column for 2014! Each week, Amy Henderson takes a look at the racing, the drivers, and the storylines that drive NASCAR and produces a list of five people, places, things, and ideas that define the current state of our sport. In the latest edition, Amy’s got five things fans might not know about six-time champion Jimmie Johnson…that make him very human.

1. He carries an old friend with him every race.

Look closely at the front bumper of Johnson’s car sometime. What you’ll see there is a small decal of a flame, with the initials “BR” and the numbers “501RH.” Johnson knows too well what the real cost of the sport is, and he carries this reminder of his friend Blaise Alexander, who was killed in an ARCA crash at Charlotte in 2001. The “501RH” on the decal is the tail number of a Hendrick plane that crashed outside of Martinsville in 2004, killing 10 people, including close friends Ricky Hendrick and Randy Dorton. When Johnson wins, he also pays tribute to the friends he lost, repeating a post-race ritual that takes place every time he wins.

“(The decal) first started with recognition of Blaise Alexander written on the front of the car,” Johnson explained when I asked him about the decal earlier this year. “We were very close friends, and on my first night of qualifying for me ever in a Cup car, he was killed on the frontstretch at Charlotte. We had mutual friends who worked on my race team, and when I came to the car the next morning, ‘BR’ was written on the front of the racecar with this little flame around it. He loved flames, so it was very fitting. It made me think back to all the conversations that he and I had over the years and the fun we had on the racetrack, how hard we’d torture the other guy if we outran him. He and I would, in a very positive manner, shoot each other the bird when we’d pass one another and laugh about it after. Those were good times, and [the decal] was just a great way to put him in front of me, and he shoots me the bird every time I cross the finish line; he’s beating me there with his name on the front.

“Then the plane went down in 2004, and I lost some close friends there as well, so we added to the BR the tail number of the aircraft. [We also pay tribute to them] every time we win by putting our hats on backwards and pointing to the sky. Ricky frustrated his dad for years wearing his hat backwards, and now we do it with a big smile on our faces.”

It’s hard to believe Johnson ever feared for his job, but he’s often said that during his first few seasons in Sprint Cup, he constantly worried about not being good enough to keep it. Even after his first Cup title, Johnson says he felt like he had to keep on winning in order to stay in the driver’s seat. Lots of race fans said Johnson was arrogant, but in reality, he was racing with the fear of not being good enough for his team or sponsors. Fear can motivate an athlete, or it can cripple him. Johnson chose to draw motivation from his own fears, and 69 wins later, it’s safe to say it worked for him; he no longer has to worry about his place in the sport.

Johnson will own up to some crazy stuff over his career. He’s fallen off the top of a golf cart while “surfing” on the roof (and got a broken wrist for his efforts), headbutted trash cans at Bank of America Stadium while wearing a fake football helmet, and pretended to be Brendan Gaughan. (Though in all fairness, Brendan Gaughan used to pretend to be Jimmie Johnson… the two looked similar as teenagers, racing off-road vehicles and like to mess with fans.) He’s toilet-papered Casey Mears’ motorhome, fallen off a kite tube, dumped some of his friends off the kite tube, and posted photos of himself in an outrageous wig on Twitter, where he also has a little fun with the fans who like to disparage him. Johnson may have gotten tagged with a “boring” label for his sponsor-friendly post-race interviews, but the stories he’s told outside of those scripted moments make him anything but vanilla.

Yeah, you read that right. Johnson makes a living out of driving fast, but he can’t stomach being a passenger with a fast driver… literally. He’s told the story (and his version is hilarious) of co-driving part of the Baja 1000 while being sick in his helmet the entire time. Only, it wasn’t his helmet at all. It belonged to Robby Gordon, who had just gotten it. Now, I’m just guessing here, but Gordon probably didn’t want it back. Hand it to Johnson though, a teenager at the time, because he refused to get out of the truck and went on to complete his stint. But in the end, he certainly “handed it” to Gordon. After the race, Johnson did what any driver who borrows equipment might do — he put the helmet back in Gordon’s helmet bag and stowed it in his hauler. What it smelled like when Gordon went to get it a few days later, we’ll just leave to the imagination.

5. Jeff Gordon wasn’t the only one who plugged him at Hendrick Motorsports.

Gordon gets a lot of credit for Johnson landing in the No. 48, a team which Hendrick Motorsports formed in 2001 as part of Gordon’s lifetime contract deal. Gordon, who owns half the team, is the owner of record, and he had some say in who the driver would be. Impressed with Johnson’s driving and his ambition, Gordon took Johnson’s name to his boss, Rick Hendrick, as a possibility for their new venture. But Hendrick was already familiar with Johnson, because his son Ricky knew him and had already told his father that they needed to get him on board. So Johnson came to HMS with not one, but two ringing endorsements. Of course, Hendrick also knew him as the kid who’d held up his plane. Ricky Hendrick had promised Johnson a ride home after a Nationwide Series race, but Hendrick retired early and Dad was ready to pack up and head home. Instead, they had to wait until the race was over for Johnson…

Nice try Amy, thanks anyway. I could not get excited about this guy no matter what he does. 10 race “Chase Champ”, and who he works for makes it even harder to garner the slightest praise of any kind.

6. According to articles in Frontstretch just a month or so ago he is in big trouble. (sometimes lazy follow the leader journalism comes back to bite you in the ass)

Back in 2002 in Jimmie’s rookie year, Lee Spencer and I were in constant email contact and had a running feud over who should be rookie of the year, she chose one lap wonder Ryan because he could get on the pole, while I constantly pointed out that poles didn’t win championships or races. Well somehow Ryan got rookie of the year, but history has shown that Jimmie was the right pick. Fans of Jimmie really don’t care what the detractors of Jimmie have to say, we just let the hate eat them up as it does Kurt Busch every time Jimmie wins. The championship always has to be won by beating Jimmie, but this year it comes down to only who among 4 drivers has the better car and race in the last race only, not a great way to decide a season championship imo. 6 championships, 69 wins and in truth a very likable guy and i have to laugh every time he wins because i know how much it eats at the haters. eat a tums folks.

Great piece. We really don’t get to hear enough about Johnson/Knaus/Hendrick. Sometimes we can read a whole paragraph that doesn’t have some kind of Hendrick connection. That’s way too much for me. More Jimmie, please. I’ve been kind of worried about him this year.

OH GOD! I LOVE HIM! I WANT MORE! PLEASE GIVE ME MORE! WHAT’S HIS FAVORITE COLOR? WHAT DOES HE EAT FOR BREAKFAST? DOES HE LIKE CATS? HOW DOES HE KEEP HIS BEARD IN SUCH GREAT SHAPE?

The chase sucks, lucas; I hate it as much as anyone else but Johnson isn’t at fault for Brain Frances stupidity.

Without Chad, this story would not appear. Chad gets very little recognition. Think about it all u Jimmy fans, how many times has he done anything great driving wise on the track. He was passed by a rookie (Larson) a few races ago and made the excuse his car was tight. Come on, if yor are a multi time champ, a tight car should not allow a rookie to pass. After all he was seventh in the race so he must of not been too tight to get in that position. Tired of hearing about his great driving. Without Chad, he’s middle of the pack

Just wait until Chad is put on TV. It’s coming.

Many really don’t want to read about JJ Amy. They’re so jealous of his success, bitterness oozes out of every pore. Knowing this makes every win extra special especially when I’m walking out of the track with my gear on.

Sad, notice all the time with your comments anybody who doesn’t worship at the HMS alter is “jealous”, “hater”..etc. So sad that’s the way your mind and others work. Could not be farther from the truth. Childish.

Yeah, you go, boy. I bet you knew when you became a fan, way back in November of 2006, that he’d do big things someday.